As chairman of Tourism Australia and a former Deputy Prime Minister, Tim Fischer has clocked up more travel miles than most people have had hot dinners. In the seventh of his exclusive columns for AT, Fischer takes once more to the historic railways, and makes his way through SA’s mighty Pichi Richi Pass.

There are hundreds of important and iconic landmarks within Australia – would that we had occasion to visit them all in one lifetime. I’m certainly doing my best to set eyes on as many as is reasonable and hopefully further the cause of domestic travel and tourism along the way, but sometimes it’s how you get to a place that makes all the difference. And there’s only one way to get to Wilpena Pound, one of South Australia’s most remarkable geological marvels: through the entree of the mighty Pichi Richi Pass, just east of Port Augusta.

I’ll go further yet and state this: there’s only one way to pass through the Pichi Richi Pass, and that’s on the 100-year-old “Coffee Pot”, a rare steam-only combined loco/carriage magnificently restored and maintained by the great Pichi Richi Railway. The oldest existing operational steam train of its kind, the Coffee Pot still makes its way unwaveringly along the oldest remaining section of the railway that connected Alice Springs with Port Augusta and Perth with the eastern seaboard.

In fact, the Pichi Richi Pass was for a time the only common part of two of the most famous train journeys in the world – the east/west and north/south lines, where once such mighty engines as the Transcontinental and the Ghan rocketed along until the line closed in ’56 after being bypassed by other routes. The Coffee Pot will remain in faithful service for close to another 12 months, whereupon I believe it will be retired for a serious overhaul – and a much deserved one at that.

Before that day arrives, however, the Coffee Pot can be chartered for a high noon departure from the narrow gauge island platform at Port Augusta, and away you go for a few kilometres alongside a section of the Great Transcontinental standard gauge. Suddenly you’ll be puffing up the grade into the Pass with intricately coloured rock faces to behold, some sharp bends and a welcome as good as any into the stunning Flinders Ranges.

At about one o’clock you’ll pause at a wayside stop and walk down a path past a deep well and into the wonderfully restored Old Willows Brewery Restaurant for a long and satisfying lunch, before rejoining the Coffee Pot to steam up to the summit and begin the dash into historic Quorn.

Quorn, headquarters of the Pichi Richi Railway, is perhaps most famous for its role as a key juncture for the passage of soldiers during WWII, at which time the lion’s share of the town’s population seemed either to be working for the railway or otherwise assisting servicemen on their way to and from various ports of call.

Nowadays, the town, its architecture and even its residents are considered so intrinsically “true blue” that Quorn and its surrounds have been the physical backdrop for several movies, including Robbery Under Arms, Gallipoli and – more recently and considerably more terrifyingly – certain parts of Wolf Creek.

Of course equally as important is Quorn’s positioning as a gateway to the Flinders, and once your Coffee Pot journey has terminated and you’ve made your way further north by road to Hawker – another previously flourishing railway town – there before you, rising in the distance as Mark Twain would say, lies that mighty pile known as The Pound.

Nearly ten kilometres wide and almost twice that in length, the Pound presents from the ground as a rugged but otherwise unremarkable low-lying hillock, perfect for bushwalking with a summit fairly easily attained – but then crest the hill and behold the almost perfectly formed natural amphitheatre beyond, covering roughly 8000 hectares and belonging to an ancient mountain range, some portions of which approach 1800 million years in age.

Fossils can be seen at nearby Brachina Gorge, Aboriginal paintings at Arkaroo Rock, rock carvings at Sacred Canyon and Chambers Gorge, and the Flinders themselves never fail to delight serious bushwalkers, especially those with an interest in the 1500 or so species of different plants contained in the area – almost half of South Australia’s entire complement.

It’s a few years since I’ve been to the Pound and experienced the emotional impact it can – and does – have on the unwary. But it’s like a magnet drawing you ever up and in, and what breathlessness awaits those travellers who look on it for the first time.

DETAILS: Wilpena Pound
Where: Wilpena Pound is around 450km north of Adelaide, about a five-hour drive.
Best time to go: April to October for warm and clear days, with desert-cool mornings and evenings perfect for hiking. November to March for 40°C-plus days, even the odd 50°C, which is another world entirely. 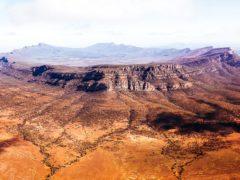 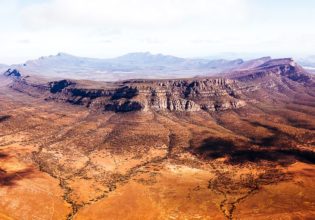 Enjoy the outback from above by taking a scenic flight. Chinta Air offers scenic flights from Rawnsley Park Station in the Flinders Ranges, and Ceduna... “This part of the Flinders Ranges is to the north at Arkaroola,” says Steve Batten. “A 30-minute walk from the village took me to Acacia Ridg...