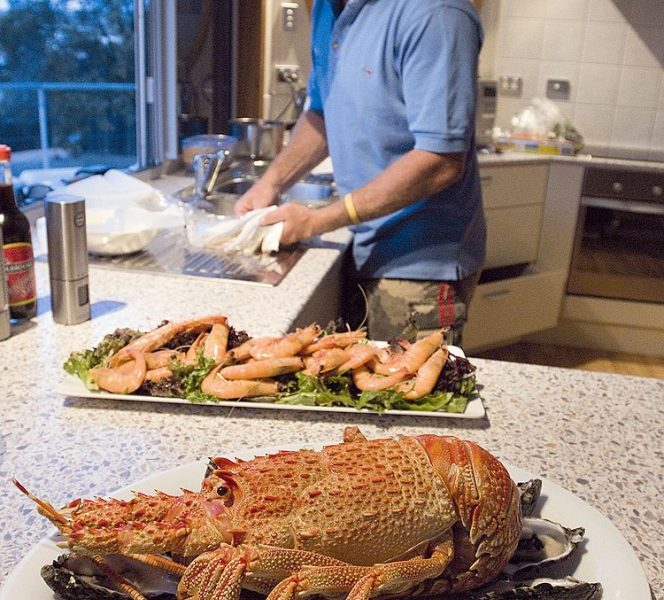 Experience No.079 in Australian Traveller Magazine’s 100 Greatest Australian Gourmet Experiences.
Forget maps and motorways, these foodies take to the sky to fly guests to the best food and wine South Australia has to offer.

You won’t be jet-lagged or road-weary at the end of this sumptuous, weeklong feast – but you might be just a little bit fatter.

On a seven-day tour of the state, private charter planes stand by to whisk you from coast to countryside. With guide Mark Gleeson lured away from Experience No. 19 on this list (Adelaide’s Central Markets), touring begins on Kangaroo Island.

Hosted by Lifetime Private Retreats owner Nick Hannaford, the two-night stay starts off with an afternoon of 4WDriving. Try cheese, wine and the truffle of the sea – most of KI Abalone’s prized produce ships straight out of the country, so this is a rare treat.

On day two, use sewing needles to stab periwinkles before supping in a shearing shed. Then pop to the Eyre Peninsula for day three and a swim with Southern Blue Fin Tuna.

Shucking oysters on the deck of the Coffin Bay Explorer (No. 47 on this list) takes care of day four, then the Barossa’s plentiful bounty is served up by day five.

The last two days fly by with more cheese and wine tastings, split up with dinner at Appellation at The Louise (No. 17) in between.

You won’t be jet-lagged or road-weary at the end of this sumptuous, weeklong feast – but you might be just a little bit fatter.

Did you know: What does a seven-day charted culinary crusade like this cost? A cool $9995 per person.