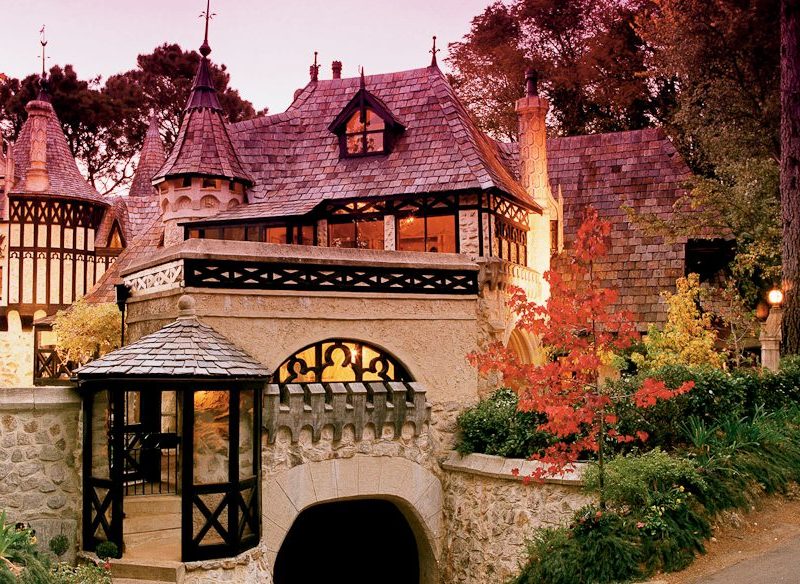 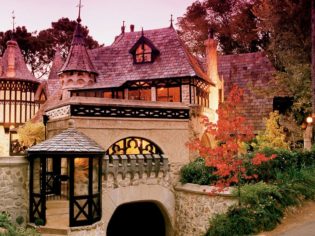 Thorngrove Manor represents an escape into luxury unparalleled in Australia. Michelle Hespe heads to Adelaide to live the life of the landed gentry, if only for a little while . . .

Imagine rolling up to your castle gates in a horse-drawn cart, slipping quietly into your private arched entranceway and ascending spiral stone stairs to your chambers. There, in a luxurious boudoir fitted out with a king-size bed sporting the finest linen, you’ll snuggle up before a roaring open fire and sip a glass of fine Barossa red while the mountain mists of winter swirl through the rose gardens below . . .

It’s enough to get anyone excited about the prospect of a long, harsh winter. Okay, I took some poetic license with the horse-drawn cart, but you can roll up to your castle gates in a comfy rental car with Vivaldi’s “Four Seasons” playing to get into swing of things – and you needn’t fork out thousands for a flight to the UK to do it. You just have to make it to Adelaide. And a mere 35km from the airport will see you cruise into Stirling, where the gates of Thorngrove Manor will swing wide in a grand welcome.

As a member of the Small Luxury Hotels of the World, Thorngrove certainly lives up to its reputation. Outside, it’s a turreted, gabled baroque fantasy. Inside, a mix of flamboyance, boldness and romance. Antique Europe collides head-on with modern day amenities, and it’s all continually evolving – thanks to owners Kenneth and Nydia Lehmann. Each suite is designed and decorated to different themes, with dedicated entrances to ensure total privacy: the elegant Queens Chamber; the country manor-style King’s Room; the cavernous and rustic Castle Chambers; the Observatory Suite complete with fairytale tower and panoramic views; and the creative, stunning Tower Room.

It’s easy to spot the source of inspiration from which Thorngrove grew: the aristocratic mindset of settlers from the mid- to late-1800s, a time when wealthy colonists arrived in Adelaide seeking to replicate the British tradition of owning lavish country mansions. The landed gentry, colonial style. “Eccentricity, folly and exoticism were well tolerated among the rich,” Kenneth explains. “Such extravagances were expressions of their special aspirations and achievements.”

Thorngrove took shape in 1984 when searches began in Australia and England for unusual antiques with which to furnish it. Spiral staircases, mullioned dormer windows, dragon beams, four-poster beds and rooms resplendent with decorative plaster and detailed architecture were all part of the blueprint. With Kenneth’s background in commercial and residential architecture and his affinity for creative design and construction, the project was a labour of love that continues to this day, as rooms and details are often reinvented.

The pieces that now call Thorngrove home are testimony to the couple’s steadfast pursuit of the unique. A set of rare stained glass windows (circa 1860) were discovered in Selkirk, Scotland, and now feature prominently in both the King’s and Queen’s Chambers. Several glazed Royal Doulton Crowned Bishop chimney pots were purchased from an antique dealer in Hereford. Even the specialised antique door fittings and latches have a rich history the owners are only too willing to share with guests.

Thorngrove is even offering a special Winter Wonderland Romance Package that wraps all the charms of this hotel into one experience. Relax in the Castle Chambers Suite after a walk around the grounds rugged up in your (free) Australian St Albans Alpaca scarf. Toast your toes before an open crackling fire then be spoilt by your own butler over a four-course candlelit dinner. Sip on 12-year-old port then indulge in Belgian chocolates before tumbling into a four-poster befitting royalty. If that’s not enough to have you feeling like the king and queen of South Australia, then simply awake to be served a creamy steaming pudding and hot Swiss chocolate, followed by a continental breakfast. All that will set you back $1130 per room (inclusive of tax and service charge, valid until September 2007).

This is one hotel in which you can sense the people of yesteryear in the very objects and features that form an integral part of each suite’s character. Guests can even use the hotel’s collection of 17th Century cutlery when dining. It’s these quirky details that create an authentic experience like none other in Australia. You really can leave life as you know it behind and, like the children who discovered Narnia, slip into a fantasyland where a castle in the mist awaits.