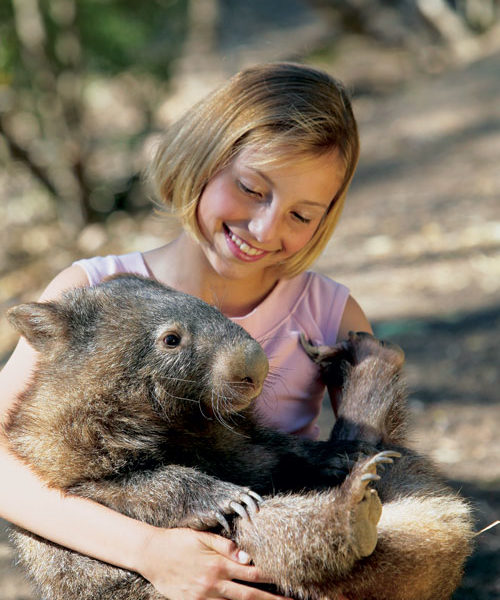 Wombats are the world’s biggest burrowing animal, and their tracks are hard to miss.

Fences are no obstacle for the Australian marsupial that can grow as tall as a six-year-old kid – with a temper to match. At up to 32kg and 1.2m in height, wombats are the world’s biggest burrowing animal, and their tracks are hard to miss.

Lucky they’re herbivores, as they don’t take very kindly to intruders. Any predator unfortunate enough to venture into their burrow would encounter this unpleasant experience: suffocation by crushing against the roof of the tunnel by an obstinate wombat.

The unlikely cutie-pies are popular in many Australian zoos, but they really can be moody and don’t take kindly to provocation. A charging wombat is capable of knocking over a fully-grown man. Just imagine a six-year-old, overweight, ill-tempered brat running at you at 40km/h – and no, your kids aren’t that fast (nor that unpleasant).

But don’t let the tall stories, its hairy nose, sharp teeth or moodiness scare you. Seeing a wombat is an awesome experience in the wild – if it’s not, sadly, already road kill – and there’s really nowhere quite like Tasmania’s national parks to see this secretive animals in numbers their natural habitat.

Where // Mountainous and forested areas of Tasmania and the southeast mainland. A great spot is Cradle Mountain or Narawntapu National Park, dubbed the “Serengeti of Tasmania”. 1300 135 513, www.parks.tas.gov.au

Did you know? // A wombat’s closest living relative is the koala bear. As for non-living relatives, several species of giant wombat roamed the Earth during the Pleistocene and were up to 3m long and 2m tall – the largest marsupials that ever lived.