Walking the Bay of Fires Lodge Walk through the lens 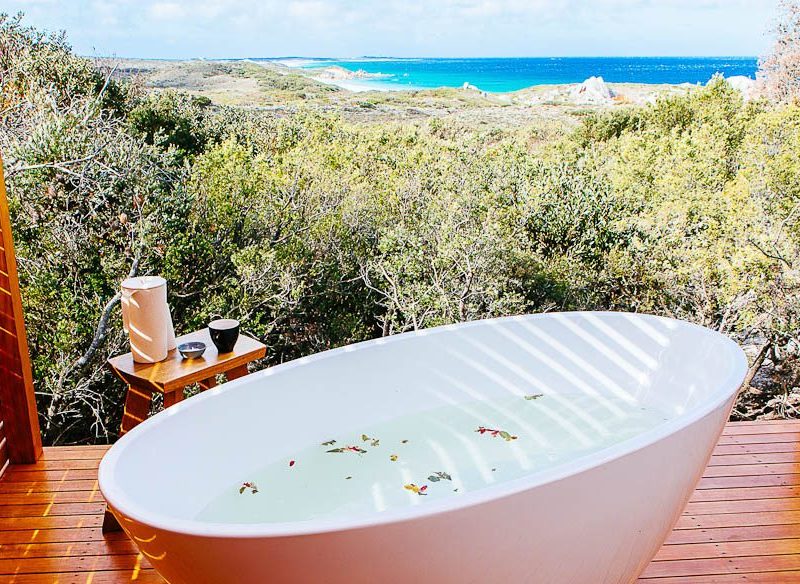 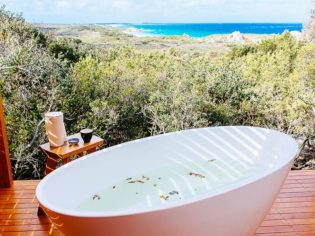 A glimpse into Tasmania’s award-winning Bay of Fires Lodge Walk, through the lens of photographer Elise Hassey.

This place is so incredible that I want to keep it a secret,” says Sydney-based photographer Elise Hassey. Unfortunately for her, that’s not an option. She’s been sent by AT on assignment to capture just what makes the four-day Bay of Fires Lodge Walk – which weaves through Mt William National Park in Tasmania’s far north-east corner – an award-winning experience. 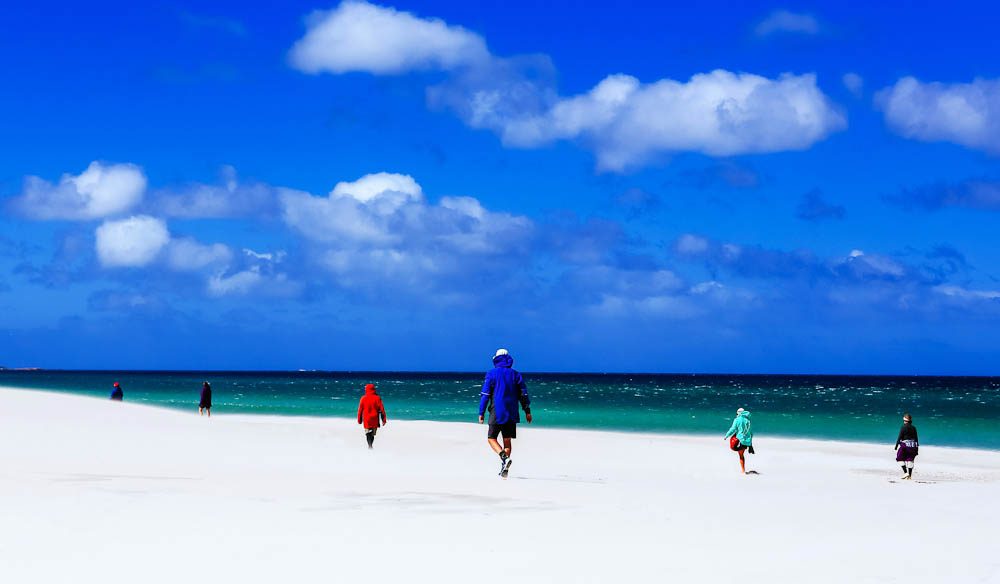 The stunning natural contrasts of the Bay of Fires Lodge Walk.

“I think it comes down to the sheer natural beauty of the area and the isolation, where you’re the only one standing on these sensational beaches that look like the edge of the world, which no one seems to know about,” adds Hassey.

Mind you, the secret has been out for some years. Some of the biggest names in the tourism industry have made the pilgrimage to this hidden paradise, reminding travellers of its elusive existence through a litany of accolades, including Lonely Planet who in 2009, dubbed it the world’s hottest destination for its “white beaches of hourglass-fine sand, Bombay Sapphire sea, azure sky… and nobody”. 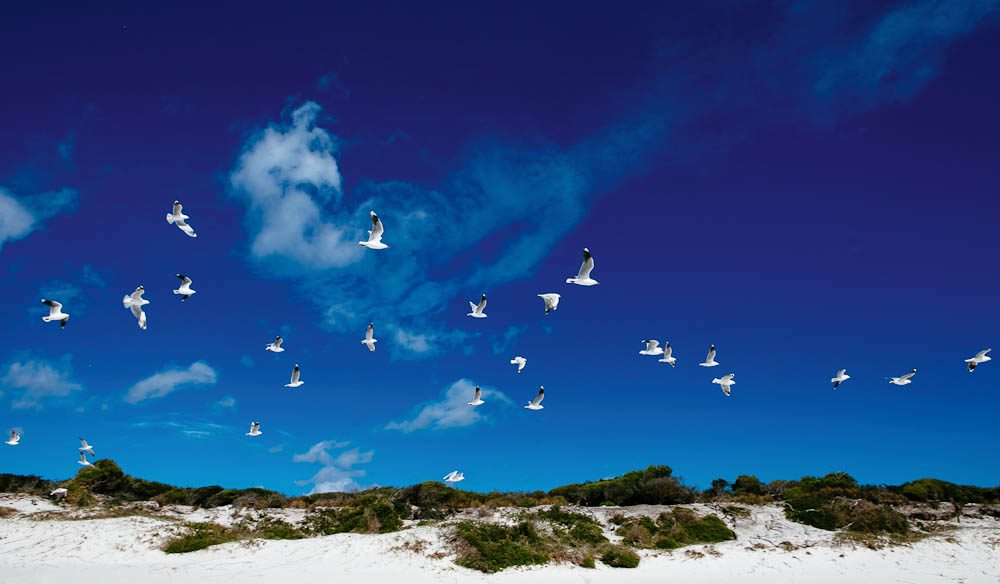 Taking flight over the Bays of Fires Lodge Walk.

HM Magazine named the exclusive Bay of Fires Lodge ‘Best Unique Accommodation’ in the same year, while it has consistently ranked in the top 30 in AT’s annual countdowns, including 100 Things To Do Before You Die in 2011, 100 Best Views in Australia in 2012 and 100 Incredible Travel Secrets in 2013.

But with no more than two groups of 10 guests allowed at any time at this exclusive eco-escape, many of us will never get to appreciate the beauty of the bay in person. And that beauty goes beyond the untouched surroundings throughout the 23-kilometre walk – it extends to the boutique accommodation, the gourmet spreads of food and one very special new addition: the spa. But hey, we’ll let the photographs do the talking – welcome to the Bay of Fires… 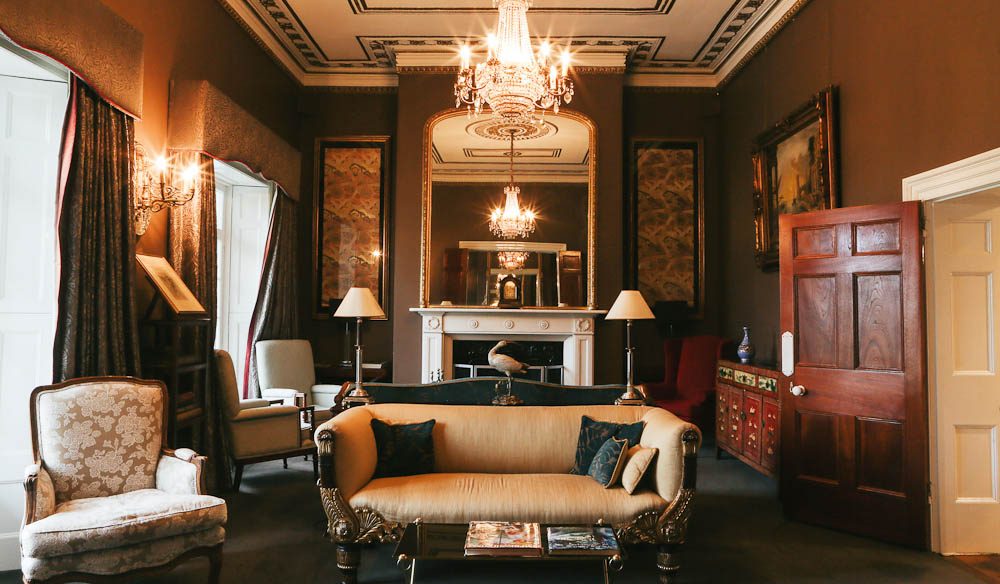 The experience starts on the outskirts of Launceston at Quamby Estate – a 19th-century homestead set on a 150-acre golf course. Everything about the property is grand – even the driveway is over one-and-a-half kilometres long, lined by 130-year-old English trees. Along with the Cradle Mountain Huts and the Bay of Fires Walk, Quamby is owned by Virgin Australia. It’s such a special way to begin the experience. We were treated to an amazing three-course dinner driven by Tasmanian produce, such as scallops and beef, all washed down with a glass of Tassie sparkling and a gorgeous suite to retreat to. 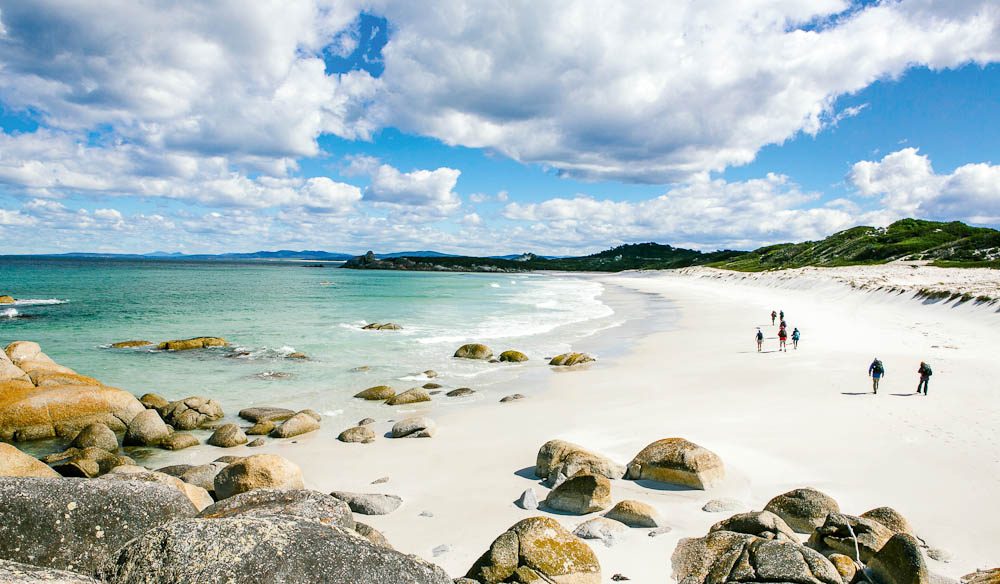 Day one of the walk takes you to Boulder Point, with views of the Bass Strait Islands

We took a three-hour drive north-east to Mount William National Park, the least visited national park in all of Tasmania due to its inaccessibility and lack of fresh water. From here we trekked seven kilometres along beaches and over sand dunes. The weather was a little overcast and drizzly, but it made for a great moody sky when we reached Boulder Point. We saw one fishing boat that day but aside from that, we didn’t see anybody else for the rest of the walk. 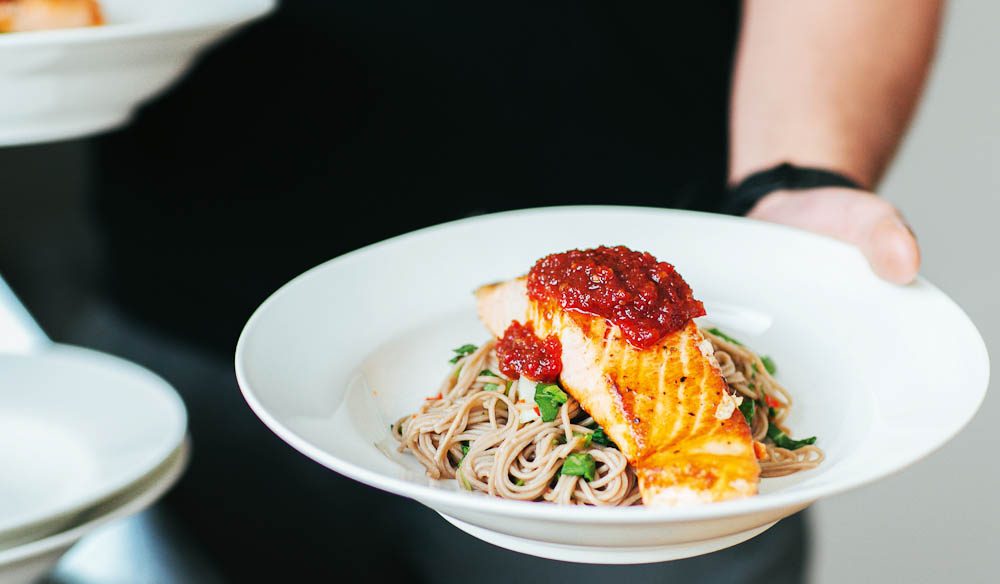 Our group stayed at Forester Beach Camp that night, which is essentially high-end camping in semi-permanent tents, but much more than your usual camping experience. We feasted on Tasmanian cheeses and pinot noir, before devouring an amazing salmon dish cooked on the barbecue. It’s quite remarkable how eco-conscious the whole experience is. There’s composting toilets and solar power lighting, and whenever any litter is spotted, the guides carry it until a proper garbage disposal is reached at the end. You get a real sense of how special this area is and how important it is that it’s left in this pristine condition. 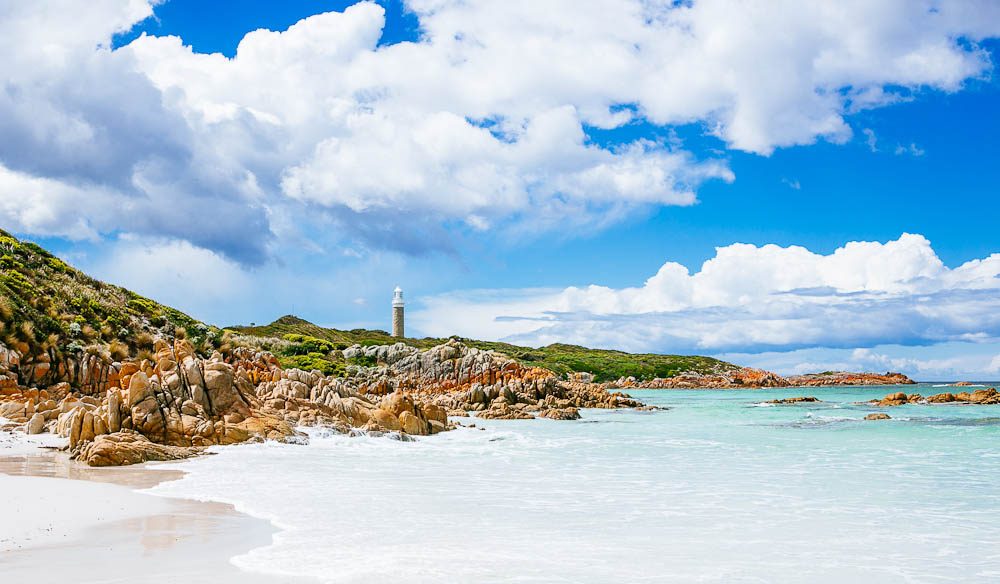 Eddystone Point Lighthouse marks the start of the Bay of Fires

Day two kicked off with a trek through the marsupial wetlands, where we spotted wallabies and pademelons throughout the day, especially at dusk. Eddystone Point Lighthouse marks the start of the Bay of Fires, which scoops the coastline between Eddystone Point and Binalong Bay. The area was named in 1773 by Captain Tobias Furneaux, but not because of the fiery orange lichen that encrusts granite boulders along the coast, which many people assume. It’s actually because the Bay of Fires was a culturally-significant meeting place for the local Aboriginal clans and so when early European explorers were sailing past, they noted that there were always big fires burning on land. 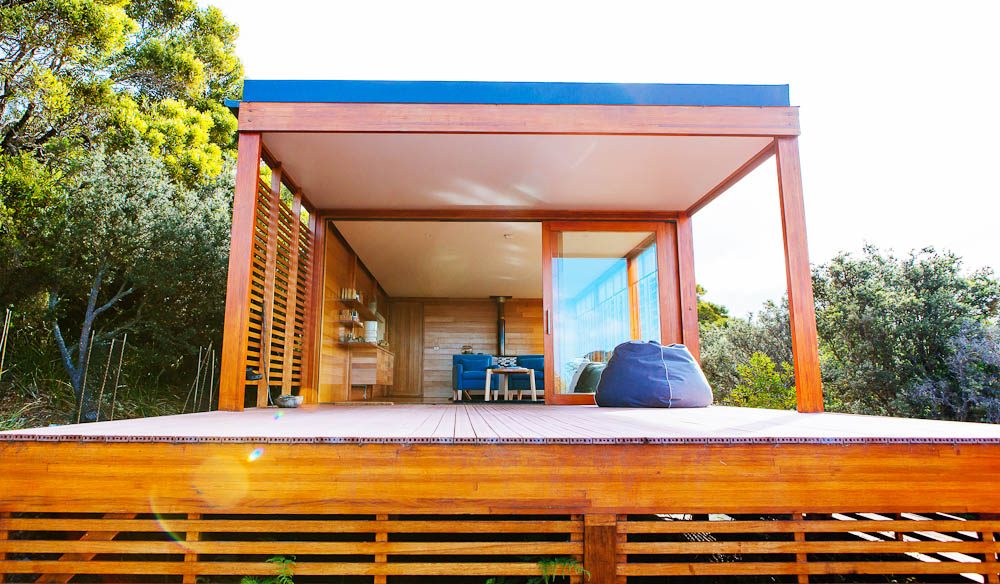 At the end of day two, we arrived at the lodge. Positioned on a hilltop overlooking the bay, it has been largely built out of timber and glass to take advantage of the natural beauty outside. You’re in this complete wilderness, with beaches all around and national park at the back, but you’re also in complete comfort; a designer pavilion with double bedroom, an indoor fireplace, lounge area and library. There’s also another balcony at the back with little foot spas, which is perfect after a day of walking. In keeping with the sustainable theme, it’s run on solar power, and when the property was built, all materials were helicoptered in to keep environmental impact to a minimum.

From the lodge, you’re treated to the breathtaking beauty and seclusion that is Abbotsbury Beach. This has to be one of the most beautiful aspects of Australia, let alone the walk. You look out to absolute aqua water, pristine white sand and granite rocks covered in bright orange and pink lichen. Best of all, you have this private beach all to yourself, except, of course, for the local wildlife such as wallabies, wombats and the occasional seal.

Kayaking down the Ansons River 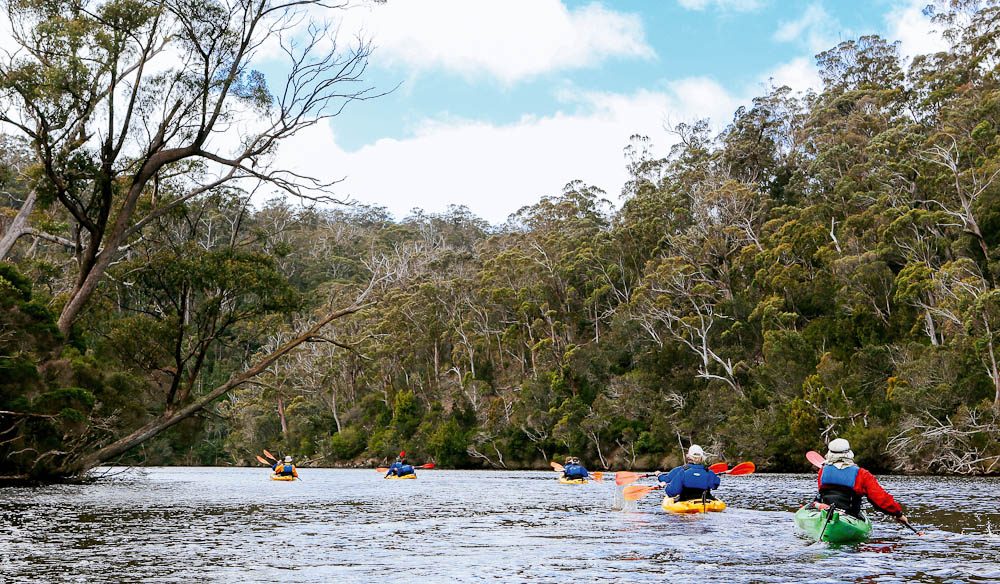 Kayaking down the Ansons River is an optional activity

We started the day with a two-hour hike through scrubland before jumping in a kayak and paddling our way down the Ansons River. It’s a beautiful place with countless sea eagles, swans, pelicans and cormorants. What enhances it even more is the knowledge of our two guides, who have researched the local flora and fauna at length, so they’re able to share many of their insights along the way.

For me, this was a highlight of the trip. The Bay of Fires Spa only opened in October and the best part is the private bath that fits two and overlooks the ocean. They use LI’TYA products, which draw on Australian native plants and indigenous healing therapies. You can choose from a menu of massages and facials but I went with the Jiga Jina Bath Soak – a combination of lemon myrtle, cinnamon myrtle, Australian sandalwood, native mint and various other essential oils. It was quite extraordinary taking in the scenery from the warm bath. It was so uplifting that as I was looking over the coastline, all I could think was ‘I’ve got to photograph this’, so after a long hike earlier that day, and the much-needed soak, I voluntarily walked for another two hours. It was worth it.

After a morning of ‘free time’, we visited nearby Apogee Vineyard. It’s headed by Andrew Pirie, one of Australia’s most successful winemakers, who launched famed Pipers Brook and Ninth Island wines. He wanted to take a step back with a little boutique winery where everything is done on site, from growing grapes to bottling. We sampled several varieties – the sparkling and canapés are especially good! 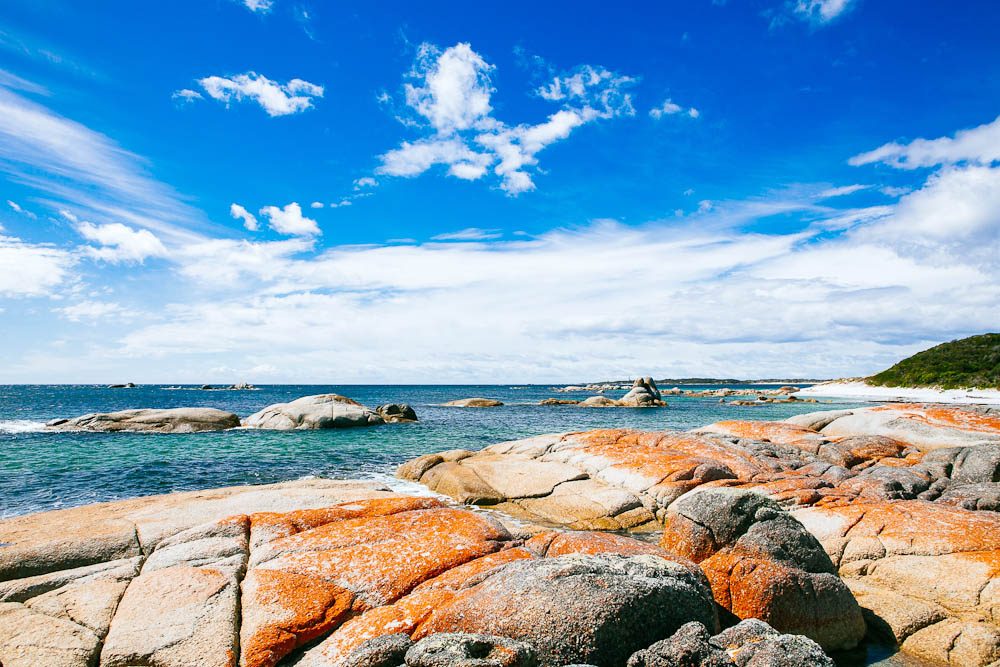 The Bay of Fires is an important Aboriginal site – historic evidence of their occupation can still be seen along the coastline, including Abbotsbury Beach

Prices start from $2595 per person twin share for a four-day guided tour including transfers, all meals, national park pass and use of a backpack and Gore-tex jacket (optional kayaking day). See bayoffires.com.au for more information.