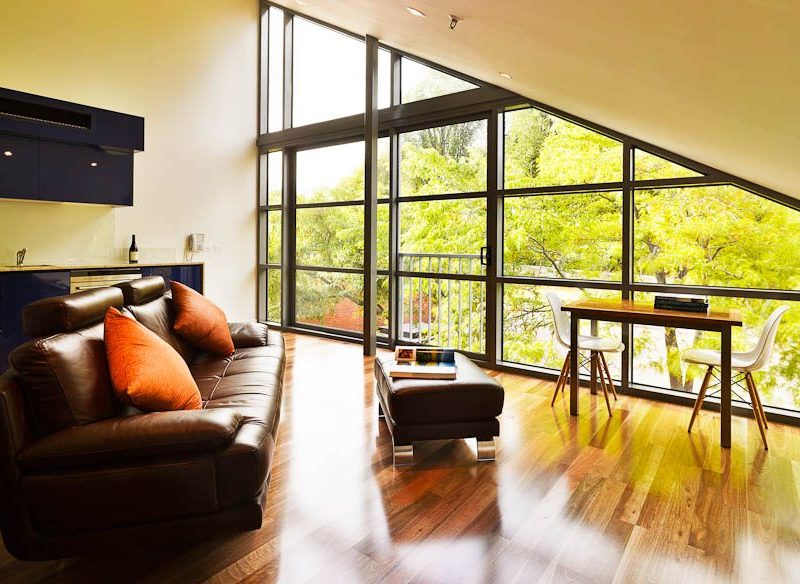 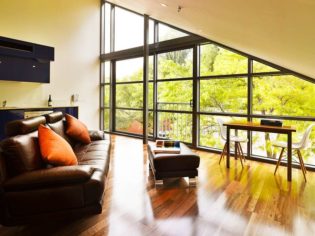 The design of Hobart’s newest hotel draws inspiration from the icy region of Antarctica, but does Stephanie Williams encounter a warm reception?

Here’s something you probably didn’t know about Hobart: it’s full of adventurers. And not the ‘weekend warrior’ kind who boast about that one walking trip they took years ago – the real deal.

So a brand new hotel – themed entirely around Antarctica – is hardly out of place; particularly when it’s located directly across the road from the site of the future $45 million Institute of Marine and Antarctic Studies… And around the corner from the CSIRO Marine Laboratory.

Indeed Salamanca Wharf Hotel is geographically central to all things Antarctic in Hobart– one could almost expect to see the great explorer Ernest Shackleton himself walking past, perhaps with Douglas Mawson in tow.

The hotel is also relatively central to all things not Antarctic, in a fabulous location in Sullivan’s Cove – where the Sydney to Hobart yachts finish and the large ice-breakers begin their journeys south. It’s just out of earshot of busy Salamanca Place, but still only a two-minute walk to the action.

The building was controversially constructed in a small lot between two 1840 John Lee Archer-designed, Georgian-style sandstone warehouses (since converted into premium office space and apartments). Local residents initially fought to prevent the development, worried it would be a blight on the landscape, but the developers won out and promised to build a contemporary yet historically sympathetic building in the space.

And they seem to have been successful. The hotel has a contemporary steel façade with an impressively solid concrete and stone back end, toning in with the surrounding sandstone. Squares cut out in the steel mimic the typically Georgian windows of the neighbouring buildings and subtly reveal the balconies hidden behind. The glass-walled reception and café area on ground level is modern and inviting.

Step inside, and it’s evident the hotel welcomes adventurous, sea-faring souls with aplomb. Check-in is seamless and the car is whisked away for parking in the nifty car stacker, behind the compact reception area. There are 10 spaces for smaller cars, stacked in pairs on top of each other (Tasmania’s first car stacker!), with bigger 4WDs valet-parked just behind the hotel on a public street.

Staff members are friendly and open and surprisingly professional for a smaller city. Gerri, the receptionist for the length of our stay, has trained in a large high-end hotel and it shows – everything is dealt with quickly and nothing is a problem. Her local knowledge is on the mark every time.

The designers have channelled the Antarctic theme into several aspects of the interior, and it works well. Dotted through the hotel public areas and rooms are large photographic works by adventure photographer, Laurent Dick, illustrating the incredible (and incredibly crazy) sporting endeavours in the Antarctic – think extreme ice-climbing, men dressed in only shorts jumping over icebergs, parasailing, caving and windsurfing.

Salamanca Wharfcalls itself a hotel, but what it offers really is serviced apartments. We choose a Premium Studio Apartment because the view is better up on the second floor and offers more space with a separate bedroom. (First floor studio apartments also look good, but have a view of an historic sandstone wall rather than the leafy green park view that we enjoy.) Apartments at the front of the building have balconies and a view out towards the Derwent River.

Everything is finished to high standard – the quality of the workmanship, the fixtures and the furniture in the apartment are excellent. The main living space is open-plan with a fully equipped kitchen and SMEG appliances. The mini bar is stocked with quality Tasmanian produce and local Cascade beer. Complimentary wi-fi is a thoughtful bonus. The floor-to-ceiling windows have a sliding door that can be thrown open to allow for a beautiful cross-breeze of fresh air, which is usually a rare commodity for hotel guests; Salamanca Wharf Hotel designers have won me over here.

Each room has its own temperature control and the apartment is wired up with easy to use touch-pads controlling lights, windows and exhausts – the windows (there is another in the bedroom) are opened very lazily with just one touch! There’s another plasma television in the bedroom, and a firm but comfortable queen-size bed.

Our spacious, intricately-tiled ice blue bathroom is gorgeous. A full-size bathtub sits alongside an open shower with only one glass panel to enclose it. You walk into it rather than step into it. The shower is a favourite feature, seconded by the expanse of mirrors that are well lit. A washer, dryer and laundry tub is hidden behind the door, which is handy for long stays or adventurers who have just returned from an expedition.

We visit in the morning – coffee is of good standard, however what is billed to me as a ‘muffin’ is in fact an oddly-shaped scone and a little bit dry. Still, it’s nothing a lashing of butter can’t fix, and we’re more than happy to sit in this great little spot, with colourful tables and chairs on the pavement for patrons. With the promising menu, I daresay it’s bound to become more popular as awareness of the location grows.

Being so close to the action o nSalamanca Place is a definite drawcard – exploration starts as soon as you leave the building with galleries, cafés and shops literally on the doorstep.

The harbour waters are only 50 metres away and the historic streets of quaint Battery Point in the backyard. At $395 a night it’s pricey, but actually decent value for those wanting a full-facility apartment for the price of a hotel room. For one night, or for a long stay, Salamanca Wharf Hotel could just be the best new place to set up base camp in Hobart.

The Verdict: Spacious and quiet, yet close to the action of Salamanca Place.

We rated: The Mor toiletry products in the bathroom.

We hated: There was no full-length mirror in the apartment.