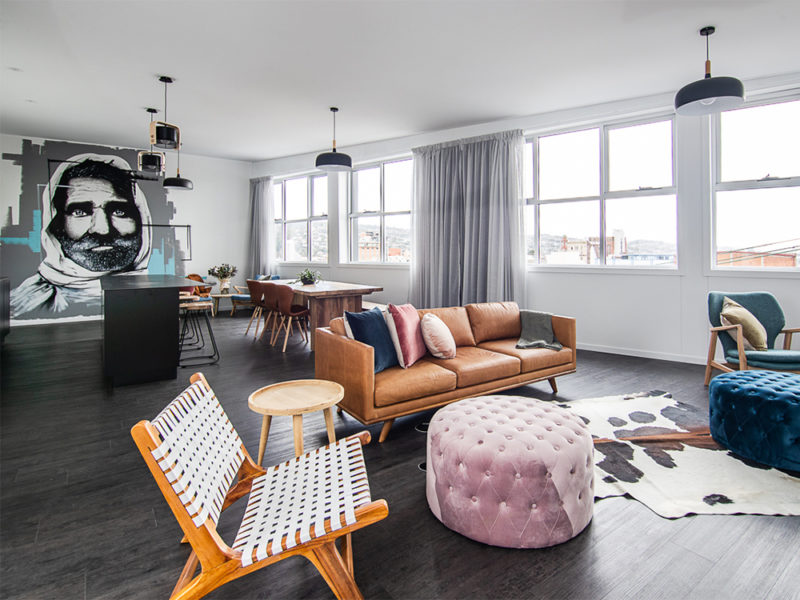 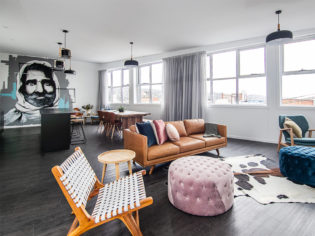 In a cosy loft room of a repurposed central-Launceston warehouse, I wake from one of the soundest sleeps I’ve had in a long time. Not just because the city’s newest boutique hotel is flash and has all the creature comforts, but because I know my stay has had a positive impact on the outside world.

Like buying your toilet paper from Who Gives a Crap (it donates half its profits to help build toilets where they’re most needed) or purchasing TOMS shoes (every pair of shoes bought equals a new pair for a child in need), you can now choose to stay in a social enterprise hotel. It’s called Change Overnight and is the only one of its kind in Australia, and apparently one of only two in the world.
Every night at Change supports one of eight causes. When I made my booking I picked Be Her Freedom – a not-for-profit organisation dedicated to ending human trafficking.

This 18-room hotel officially opened in June 2019. It is the brainchild of young Tasmanian entrepreneurs Tara Howell, of award-winning Blue Derby Pods Ride, and Sam Haberle of S. Group. After teaming up with like-minded locals Toby Wilkin and Marcel Anstie, the idea quickly progressed from conceptual to concrete. Collectively, these four are a social capitalist force to be reckoned with.

Like the city of Launceston, Change Overnight doesn’t look like much from a distance, but its appeal increases with proximity. I arrive late on a winter’s afternoon only a few days after the official launch. The building’s exterior and entrance are understated. Inside, along a subdued hallway – symbolic of the blinkers we wear to the world’s problems or perhaps our sense of helplessness in the face of so many – are lettered doors. I’m in F: a one-bedroom, two-storey apartment.

Behind each door is a far brighter and more positive space, decorated with a dynamic hand-painted mural and OZ Design furniture. Striking outdoor seating areas have been created using the building’s original exterior walls, minus the windows and roof. Views from this low-rise building take in the underrated city’s retro skyline and heritage homes.

Operations manager Anna Gibson, who has been integral to the hotel’s interior design, shows me around. The three-bedroom penthouse is particularly appealing. Afternoon sun streams through a wall of windows in the main room onto the comfy chairs and couches, linen throws and cowhide floor coverings. ‘Thanks for being a life changer’ is stencilled on a door.

Change is a self-check-in hotel with state-of-the-art keyless access. Apartments are self-contained but you can choose to have your towels refreshed daily instead of every few days. “It’s literally like Airbnb but a hotel version,” explains Anna. And all sorts of people have already booked to stay, she tells me, including footy fans, corporate groups, solo travellers, couples, families. “There’s no reason you wouldn’t choose us. Our price is competitive, our product’s amazing,” says Tara Howell. Every apartment has a washing machine, well-equipped kitchen, Ultimate Ears speaker, free wi-fi, TV, air-conditioner, hair dryer, iron and ironing board, free undercover parking. Most apartments have views and the hotel is just off Launceston’s cafe strip of George Street.

Change’s eight causes – six chosen by the team and two voted on by the public – range from local to international. “We are unapologetically global,” says Tara, “because we want people to think of their community as not just their backyard.” At this stage the plan is to support different causes each year.

All murals are by Launceston-based street artist Patrick Camino, who’s been inspired by photojournalistic images of people from around the world. One face that particularly resonated with him was that of a man from India he’s since painted on a penthouse wall: “he’s thankful. I really wanted to capture that”. Patrick loves the concept of the hotel. “There’s one thing that’s always interested me,” he says. “Being distinctive.”

Yet the Change team hopes their concept catches on and, eventually, people worldwide will book accommodation based on reasons beyond just amenities, location and price – so that everyone everywhere gets a better night’s sleep.

The main room and outdoor area of a two-bed apartment

Causes for Change you can support by checking in…

A night funds one therapeutic session for a child or family who has experienced abuse.

A night will provide a welcome pack to a survivor of human trafficking upon entering an A21 Campaign shelter.

A night funds a phone call to a youth in need of mental health assistance.

A night supports one child through a short-term education program in India.

A night provides 210 breakfasts for children in an orphanage in Banbasa, India.

A night purchases and protects approximately 10 square metres of land in Tasmania.

A night funds the production of 80 packs of sanitary pads and their distribution within India.

A night funds one child’s term of education and school supplies at this Port Vila, Vanuatu, school.

Having long – and somewhat unfairly – struggled in the shadow of its much-loved capital, Launceston has remained a relatively under-the-radar seco...

12 of the best things to do in Launceston

Launceston is in the limelight thanks to the staging of Mona Foma over summer, but that's not all there is to do in Tasmania's northern riverside town...

How to spend 48 hours in Launceston

A Detours & Diversions article on the various things to do within Launceston during a short 48-hour stopover. Tasting bush pepper cheese, quince ...