On the trail for leatherwood honey in Tasmania 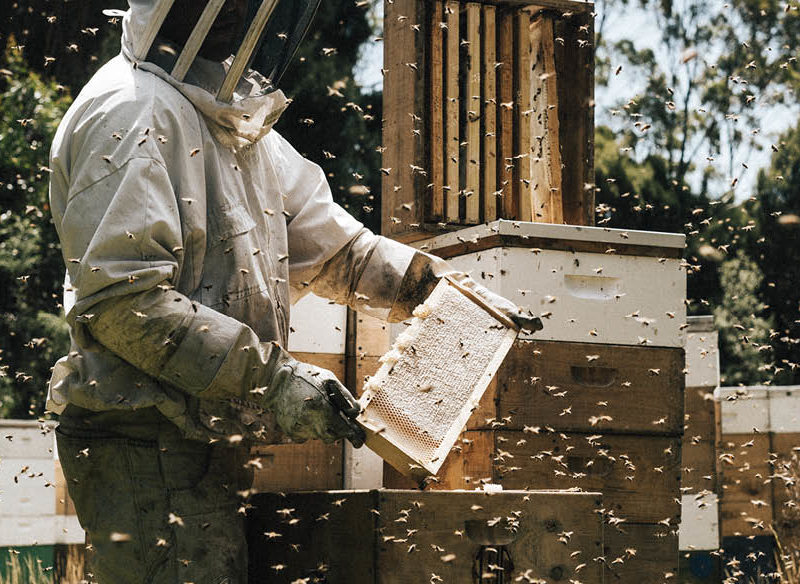 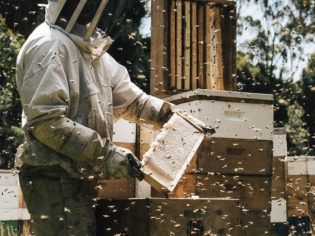 It’s the quintessential taste of Tasmania and the excuse for bee puns galore: we head out on the trail of leatherwood honey in the state’s western wilderness.

Have I been lured to some secret pagan rite in this lonely forest clearing? Mysterious figures, masked and white-clad, puff smoke from burners while attending a cluster of squat white pillars against a backdrop of towering trees. The air hums with an unearthly intensity and countless blurred black dots zoom in all directions. No, not Beelzebub. Bees.

If this is nature worship then it’s the most practical, no-nonsense kind: the summer harvest of leatherwood honey, an utterly organic delicacy only obtainable in Tasmania’s western wilderness.

Standing in a buzzing cloud, a beekeeper hands me a sticky lump of golden honeycomb. I flee like an animated cartoon bear, trailed by bees, until I’m far enough from the hives to risk lifting my mask for a hurried bite.

It’s delicious beyond description, this ‘distillate of the wilderness’, as apiarist Julian Wolfhagen calls it. His Tasmanian Honey Company, founded in 1978, is one of six outfits producing 85 per cent of the state’s honey, of which some 70 to 80 per cent is leatherwood. Even more than the pink-eye potato, perhaps, leatherwood honey is the quintessential taste of Tasmania. “Leatherwood has a wonderful floral bouquet,” says Julian. “It’s quite a challenging, sophisticated flavour: spicy and complex. Like oysters and opera, it’s a bit of an acquired taste.”

Hailing from a Midlands farming family, Julian has always found bees fascinating. “My grandfather had hives – and wonderful old beekeeping books from the 19th century, which added a bit of mystery to it.”

It’s a clear February day and Julian’s team are checking their West Coast Range sites between Tullah and Queenstown. “Being out in complete nature – there’s no better place,” says Julian. “And working in a symbiotic relationship with an insect is a pretty cool thing to do. I love bees. There’s always something new to learn and they’re only doing good, pollinating plants.”

We’ve just driven the B28, Tasmania’s most wildly scenic road. Stark mountains studded with pink rocks loom roadside; cobalt lakes are framed by more distant peaks. But as much as Julian’s beekeepers relish being here, nobody’s standing around rhapsodising (except me; that’s my job). Six men, 16 hives and up to 1.3 million bees add up to furious activity – especially from the bees. Looking like a chest of drawers from Vinnies, a beehive is basically a stack of white wooden boxes, each containing eight to 10 frames that the bees fill with honeycomb. The lowest two boxes are for the bees. The others (‘supers’) are ours. The bees don’t necessarily agree, so smokers packed with burning pine needles are puffed liberally as a calm-bee-down during collection.

Their most obvious vexation is ‘bee bouncing’ – whacking supers against metal frames to jolt out the thousands inside in a bee-wildered clump. This is a vital prelude to checking frames for honeycomb, loading the truck with full supers and putting empties on the hives. Back at base the honey is extracted by centrifuge, filtered and bottled.

Beekeepers lease sites from land managers such as Forestry Tasmania and the Parks & Wildlife Service. Hives are left alone for a couple of weeks while the bees forage for nectar, ranging as far as maybe three kilometres. Their innate navigational genius and habit of spending nights in the hive ensure they aren’t lost; at season’s end the hives are trucked home overnight. The honey is guaranteed to be leatherwood, I’m told, being the only tree flowering this time of year (February).

Once pointed out, leatherwood in bloom is unmistakable: white flowers peppering the thick forest like summer snowdrops. It’s actually two Eucryphia species (lucida and milliganii), both unique to Tasmania, although a South American relative named ulmo also yields a distinctive honey. “It tastes somewhat similar,” says Julian. “But not the same, fortunately – not quite as good!”

Although leatherwood dates to dinosaur days, its native pollinators are non-hiving insects such as march flies. Honeybees reached Tasmania with British colonists, but leatherwood wasn’t targeted before West Coast settlement blossomed with mining just over a century ago. And the business only truly got underway in the mid-20th century, when new roads gave forest access to hive trucks. In other words, it’s a taste 70 million years in the making.

Heading to the hills

In the north-west, sleepy Mawbanna is tucked 14 kilometres inland between coastal Burnie and Smithton. The road twists through forest before opening onto vistas of rolling hills and a horizon garlanded by the blueish peaks that inspired Robbie Charles’ father, Rueben, when he founded Blue Hills Honey in 1955.

“Dad was the first to export leatherwood to Japan, back in the early ’60s,” says Robbie, who made a beeline to the family business from school. “The Savage River pipeline opened in ’67 and that’s our biggest area now. We run, probably, 1000 hives there.”

Blue Hills are the northernmost of the six main firms, with 1800 hives across the Tarkine wilderness. “Our leatherwood has a really soft finish,” says Nicola Charles, Robbie’s wife and Blue Hills’ manager. “Each region has its own profile; we think our pH is a bit more neutral than some of the other leatherwoods. You do get terroir.”

You get big variations in output, too; Mother Nature is a fickle business partner. A cold, wet or windy summer – hello, 2017 – plays havoc with supply. Bees don’t forage in the rain, or fly much below 15ºC, and leatherwood needs about 20ºC to flower.

“This is the nicest day we’ve had for three weeks,” says Robbie, glad to see sunshine as he works his hives. “If we’d had this weather before we would have a lot of honey by now. What we’ve got now is about half a crop, but another fortnight like this and they might fill again.”

Weather isn’t the only challenge. “There’s been a lot of leatherwood territory lost over the years,” says Nicola. “Some areas are difficult to get to. Bridges have washed out in flood and we’ve had to fly bees in.” Other novel solutions include the touristic West Coast Wilderness Railway, which third-generation apiary R. Stephens uses to get hives into forest outside Strahan.

Unlike other trees, leatherwood can’t recover from bushfire. Every burn whittles down reserves, and 2016 was a shocker, with 72,000 hectares razed in the north-west and Blue Hills evacuated. Given this, it seems incredible that leatherwood isn’t a protected species, but it’s still extensively logged – mostly as eucalypt bycatch. “We used to run 1000 hives within 10 miles of Mawbanna and it all got logged out,” Robbie says. “Once they clear-fell and burn it, leatherwood doesn’t regenerate. Rather than being a mixed forest, they turn it into a dry eucalypt forest. Then when there’s a fire they wonder why it all burns. They change the whole ecology of the place.”

This has wider implications than the survival of a boutique industry. As Tasmania’s richest and most reliable nectar flow, leatherwood sustains the bees that underpin the state’s entire pollination-dependent agriculture. And supply will never be secured by plantations, because leatherwood needs a century or so to yield a productive nectar flow. As Julian says, “People who invest money like to get a return while they’re still alive.”

With leatherwood a wild resource, profound understanding of its home range is paramount. “Every site is a different microclimate, which affects the rate bees collect,” says Anthony van Bohemen, one of Julian’s beekeepers. “Bees are sensitive to slight variations of temperature and it takes time to learn the personality of each area.”

“I spend a lot of time driving, just looking at the environment,” Julian considers. “You really have to know your country and look at the trees and understand botany, weather patterns, and be able to know where honey will be.”

We can only hope there’ll always be enough leatherwood trees for Tasmania’s beekeepers to keep on knowing where honey will be. Even if we can never know the West Coast as deeply, our appreciation of its natural wonders can be as heartfelt. And nothing enhances that appreciation like tasting the produce that speaks of this wild, pure country most truly, most deeply, most sweetly.