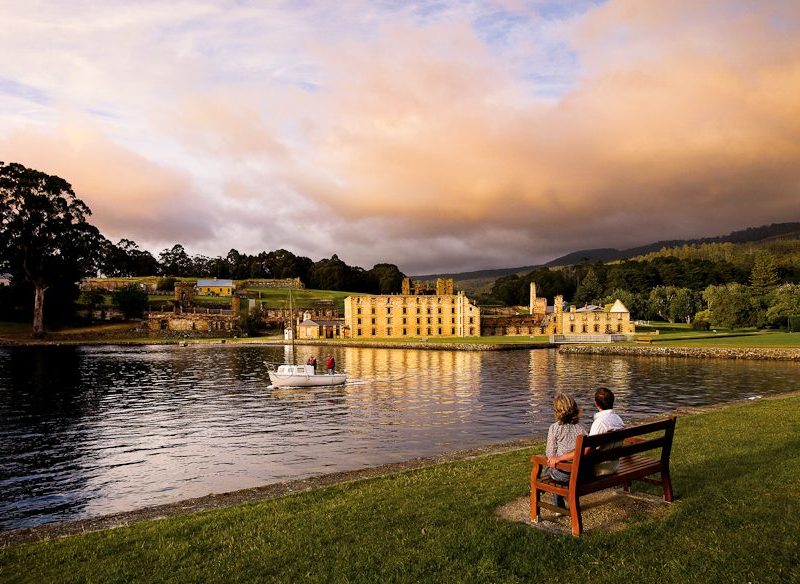 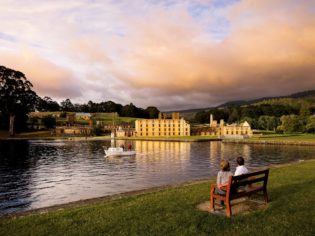 Discover a place with a dark history and an intriguing mix of beauty and bedlam – Port Arthur.

While a night-fright tour of the Port Arthur historic site is entertaining, it would be taken to a whole new level if the stories told stuck to the facts. This convict-era prison colony was a nasty place, where so many men lost their marbles that an asylum had to be built to accommodate them.

There’s something odd about going on a ghost tour in a place with a past that’s much more frightening than anything a guy in period costume could tell you while swinging an oil lantern in front of his face.

It doesn’t much move me that someone in the 1800s heard phantom footsteps or saw a flickering candle. But if I were told that at the same time as some corseted warden’s wife was swooning at a supposed spirit, convicts were being held in solitary confinement in a sound-proofed, blacked-out cell for months at a time, slowly going mad in the dark, in that building just over there – the one with gawping black holes for windows – well, that would scare the willies out of me. 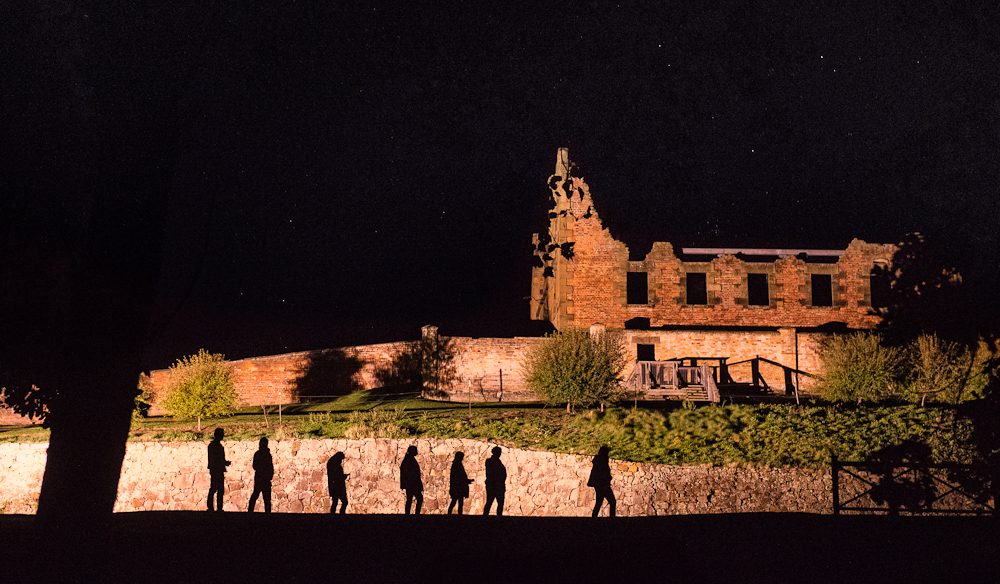 I’m ashamed to admit that the first I heard of Port Arthur, one of Australia’s most important (and beautiful) historic sites, was when a gunman killed 35 people and wounded 21 more here on April 28, 1996. While I’d learnt a little about convict history in high school, our classes didn’t venture much past The Rocks and The Rum Rebellion. They certainly never stretched to Port Arthur, 100km south-east of Hobart, which was the largest penal colony in convict history.

I would remember if I’d heard that convicts in the Separate Prison (modelled on London’s Pentonville Prison) endured enforced silence, and were made to wear masks in public, only taking them off in their cells and in church, where they stood in single-man blinkered stalls that looked to the pulpit alone.

Port Arthur was known for experimental prison reform. At first it was lauded for its focus on rehabilitation through hard labour (shipbuilding and timber logging), but as the convict population aged it took on more sinister, psychological methods of punishment. It became the scene of some of the most sadistic prison experiments anywhere in the world.

Port Arthur is now a UNESCO World Heritage-listed site, and in daylight it is alarmingly beautiful. It’s an outdoor museum without any sense of Disneyland fakeness, featuring 30 original convict-constructed buildings including prison wards, sentry boxes and guards’ homes.

Some are in ruins, but others are intact, with the wallpaper still on the walls, food jars in the cupboards and display cabinets holding relics found in recent archaeological digs. 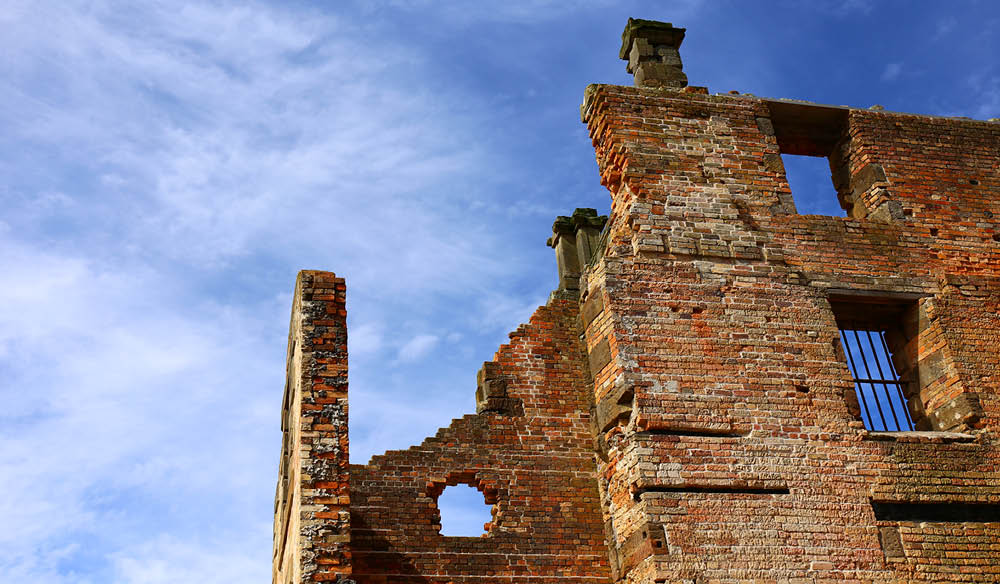 Port Arthur was voted ‘The Best Historical Site’ in Australia

Its gorgeous European-style landscaped gardens are a joy to wander through. But there’s a hint of past horrors at every turn. A Monterey-cypress-lined Soldiers Memorial Avenue commemorates locals who died in the First World War (1914-18). A calming cruise on the harbour culminates in a walking tour of the Isle of the Dead, complete with convict graves. A discreet native garden grows in the ruins of what was formerly the Broad Arrow Café, the site where most lives were lost during the 1996 massacre.

But even though you can’t ignore Port Arthur’s dark side, I’d recommend every Australian visit at some point in their life. It is a truly fascinating place that played an important, if disturbing, role in our history, and the site is well managed and maintained.

The old asylum is now a library, where records can be trawled through to discover family history. And a real sense of what life was like here can be felt in the restored Separate Prison, which is rigged with an audio tour that welcomes you as if you were a prisoner, reads you the rules and continues with knocks and bumps, sniffs and screams, as you walk along corridors, peering into the hatches in cell doors. Now that’s scary.

Everything you need to know when visiting Port Arthur Historic Site

Where is Port Arthur Historic Site?

Port Arthur is on the Tasman Peninsula, a 1½-hr drive south-east of Hobart along the A9 highway. There are bus services from Hobart to Port Arthur but is recommended that you hire a car if you’re flying into Hobart from interstate, so you can take a few days to explore Tasmania’s Historic Convict Trail.

Where to stay in Port Arthur?

We stayed at Stewarts Bay Lodge.

It comprises one-, two- and three-bedroom timber cabins starting at $140 per night for a one-bedroom cabin, minimum two-night stay. Deluxe, modern, one- and two-bedroom chalets with spa baths, king beds and private decks start at $190 per night (minimum two-night stay). On site, Taylor’s Waterfront Restaurant has a great menu inspired by local produce. It’s open for breakfast daily and for dinner Wed-Sun.

Allow more than a couple of hours to explore the Port Arthur Historic Site – it’s much larger than you’d imagine. There are a range of passes that allow you to explore on your own or in guided tours both during the day and after dark.
An entry-level bronze pass gets you a 45-minute guided walking tour, a 30-minute harbour cruise and access to the buildings, grounds and museum ($30 adult, $15 child, $75 family; allow at least four hours).

The top-end gold pass gives you the above plus tours to the Isle of the Dead Cemetery and Point Puer Boys’ Prison, a self-guided audio tour, morning or afternoon tea and lunch ($100 adult, $77 child).

Night tours include the Port Arthur Ghost Tour mentioned in the story and the incredible Paranormal Investigation Experience, which is an adults-only, five-hour tour that takes place just once a month and allows you to use the latest ghost-hunting technology to explore Port Arthur after dark.

What to do in Port Arthur

Enjoy the scenery. Take the scenic drive route off the A9 to Pirates Bay Lookout, one of Australia’s most beautiful beach views, looking across to Hippolyte Rocks and Cape Huay.

While you’re at Pirates Bay, drop in on Doo Town. This too-cute township comprises holiday shacks with nameplates such as Doo-I, Make Doo, Much A-Doo and Doo-Little.

Check out natural coastal formations such as the Blowhole, Tasman Arch and the Devil’s Kitchen. Twelve kilometres south of Port Arthur at Maingon Bay is Remarkable Cave.

Take a hike. The Bivouac Bay Walk is a 10km return trip along the coast (allow 3-4 hours), starting on the beach at Fortescue Bay, which is 4km north of Port Arthur. If you’re after something a little more challenging, take the Cape Raoul Walk, which features uphill climbs and gives great views from some of the highest cliffs in Australia.