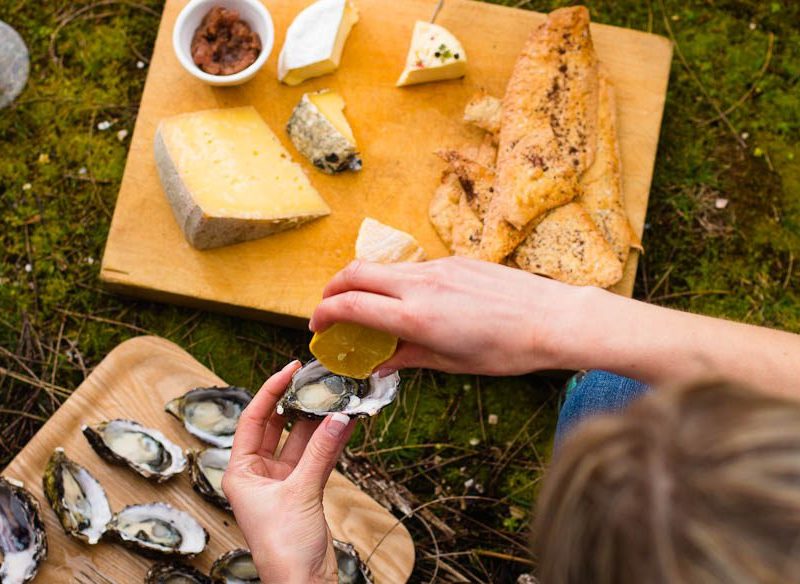 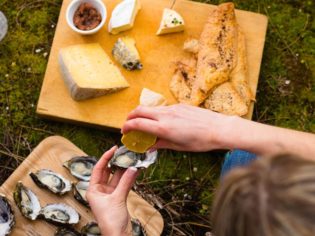 Bruny Island has a weekend experience that may just be the ultimate Tasmanian taster.

Rumour has it that back in the early 1800s, the waters between Hobart and Bruny Island (a 45-minute catamaran ride south-east of the city), were home to so many whales that residents complained to the government about the noise they made at night.

Yes, complained. Alas, a whaling boom through till the 1840s fixed that.

“Whaling was big business here,” says Hobart local, Robert Knight. “The oil was used to light London’s street lamps. As you can imagine, with over six [whaling] stations on the island alone, Bruny was a rough ol’ place back then,” he adds.

As our Bruny Island guide this weekend, he knows more than most about its history.

Still, it’s hard to imagine such gore here today. As we hike to the top of Cape Queen Elizabeth on the island’s north, overlooking a serene blue expanse and listening to the joyful gurgles of magpies – it rather seems a picture of untouched utopia.

This is one of many life-affirming vistas guests are treated to onboard the Bruny Island Long Weekend (BILW) walking experience.

That is, three days of walking, eating and wildlife watching, which as Knight (also the founder of BILW) promises, are the best bits of Tassie concentrated into one weekend.

“Bruny Island is like a distillation of all the things that make Tasmania so special, like the scenery, the wildlife and the produce, all captured on one little island,” he says.

The majority of visitors, however, tend to day-trip from Hobart to experience what locals call ‘the milk run’ – squeezing in a token wildlife cruise and a providore or two before the home-time bell rings.

Frustrated by how much of the island was being missed, Knight launched BILW in February.

It doesn’t take long for this Bruny first-timer to fall for the island’s charms. Having been on the island less than two hours, Knight and fellow guide Alex Hale, have already ensured all five guests are sufficiently caffeinated on the private catamaran ride from Hobart, stripped us of luggage (no heavy-backpacked hiking here), and led us on a scenic traipse through coastal health en route to the cape.

While I unzip my camera bag at the top – it’d be criminal to not capture this vantage point – Knight unzips his backpack to reveal gourmet lunch boxes for all. Forget the humble vegemite sanga – we’re talking thick frittata slices, crunchy salad and icy bottles of water.

Matching the food are the views, enhanced by Hale’s encyclopaedic knowledge of Bruny, which he imparts along the way.

“Out here is Adventure Bay, which is a central part of the island,” he points, explaining that although Bruny stretches 100 kilometres north to south, it is in fact two landmasses, linked by a narrow strip bordering Adventure Bay.

“It was also the perfect pit stop for early European explorers since it’s sheltered and with plenty of fresh water and firewood around.”

“When explorer Abel Tasman came along in 1642, he tried to stop in at Adventure Bay but his two ships were blown out to sea, across what’s now known as Storm Bay.

It meant they didn’t get to meet any of the Indigenous locals, but they did notice large footholes carved into trees, so they figured giants lived here.”

Feasting on oysters, cheese and wine

Post-lunch we continue trekking to the bottom of the cape, passing hardy shrubbery, which on closer inspection hide delicate wildflowers, as though Angry Anderson (a renowned softie despite his fierce exterior) was prematurely reincarnated in plant form.

Along the way, Hale and Knight rattle off countless facts about the local ecosystem, like how there are 50 bird species alone inhabiting the island – the only place where you’ll find all 12 of Tassie’s endemic varieties in one place.

As we ease our way to the base, the final leg of today’s walk is along Miles Beach – a vast sandy stretch where the only footprints are our own.

Chunks of rock containing fossilised sea creatures are casually strewn across the beach like kelp; offcuts of the towering rock formation nearby, a casual 270-million years old.

But as Knight explains, Bruny hasn’t always been about secluded beaches and untouched scenery. Once the whaling industry ceased, coal mining and forestry took over, whereas now, with a general uprise of greenies right across the apple isle, niche agriculture and tourism are the major players.

After today’s 12-kilometre wander we’re chauffeured to his office, on the banks of Adventure Bay. Trading sandy sneakers for wetsuit booties, we join him in knee-deep water where he shucks oysters fresh from the sea.

“After working in stockbroking for years I was made redundant when the GFC struck, so I serendipitously took up a job with a friend working on an oyster farm,” says Hauser, handing me a shell of creamy, briny deliciousness.

It needs nothing more than a squeeze of lemon – how all good oysters should be.

“Needless to say, I loved working outside on the water and I eventually struck a deal with the previous owner. I certainly haven’t regretted the change,” he grins from under a straw-brimmed hat. I just can’t imagine why…

Another local producer you can expect to visit is The Bruny Island Cheese Company, which creates eight diet-stalling styles like the devilishly good ‘Saint’ brie. One could be forgiven for devouring an entire wheel of this gooey godsend…all hikers need sustenance, right?

And what’s cheese without wine? Thankfully, Bruny has that too.

Overnight at ‘The Block’

As the day draws to an end, we arrive at ‘The Block’ – a 100-acre slice of Tasmanian wilderness dotted with four guest tents. If you can call them that – each disguises a heavenly king-sized bed inside. Although The Block is exclusive to Bruny Island Long Weekenders, the local wallabies don’t care for such snobbery and let themselves in to graze on the surrounding grass.

At night time, when they’re most active, I hear their tails thumping around my tent which, in a haze of semi-consciousness, gets the heart-thumping too.

However, the property’s best feature is hidden down a pebbled pathway: the shower. Every time I soak in this timber oasis of steaming water and fragrant Sukin products, I lose track of time gazing out its large open window, overlooking the eucalypt forest.

Dinner by the fireplace

Dinner is no basic campground job either. We gather in the dining house each evening (with a balcony and fireplace no less), where Knight and Hale are quick to hand me a glass of Tasmanian wine.

Bruny Island oysters and cheeses are served alongside wallaby carpaccio, flavoursome dips and wood-fired bread. On the first night, this is followed by a rack of Murrayfield lamb from North Bruny, while the second night’s feast features juicy Tasmanian beef from Cape Grim. It all seems better suited to a fine-dining restaurant than a camp kitchen.

Over the following two days, walks vary from a 12-kilometre trek around Bruny’s rugged south to East Cloudy Head, to a cruisy stroll through a fern-lined rainforest. Although vastly different landscapes, especially for a small island, the scenery never ceases to impress.

A word of warning though for the East Cloudy Head route – best pack a pair of lightweight pants. The alpine shrubbery here can, shall we say, vigorously exfoliated bare legs.

The BILW experience culminates with a ride onboard Rob Pennicott’s multi-award-winning Bruny Island wildlife cruise. Despite the island’s grim whaling history, the ocean giants, among other sea creatures have returned to the area, making the cruise a bucket-list experience.

Dealt life jackets and ginger tablets for seasickness (this is the choppy Southern Ocean, after all), we venture around the island’s south. It’s easy to imagine the impressions of early European explorers here, stumbling across these monumental cliff faces, topped in thick misty forests; it remains relatively unchanged.

Suddenly a gasp of excitement arrives: the water-spurting ‘Breathing Rock’ is spitting onto the faces of passengers. However, it’s soon outshone by colonies of sunbathing seals, throwing back their heavy heads to call out throaty greetings.

They’re not the only inquisitive residents today either – a pod of dolphins bob around the sides of the vessel for a few minutes before carrying on their way. Three hours later, we arrive back on land, wind-swept, salt-lipped but smiling ear to ear.

We don’t see any whales, but if we did, I’m sure the locals would be delighted.

The experience begins at Hobart’s Peppermint Bay, where guests board a private high-speed catamaran for a 45-minute journey to Bruny Island. Transfers to and from Hobart are included in the Bruny Island Long Weekend package.

There are four glamping-style tents at ‘The Block’ – each with a king-sized bed, balcony and thoughtful touches like fine linen, torches, clothing hooks and extra blankets.

Bruny Island Long Weekend runs from November to April. There is a minimum of two and maximum of eight guests.

The tour includes transport around Bruny Island, two nights’ accommodation, all food and wine, coastal day walks with expert guides, all national park passes, and Rob Pennicott’s multi-award-winning Bruny Island Cruise, from $1480 per person. The only extra cash you’ll need is for more wine or cheese. 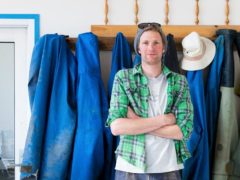 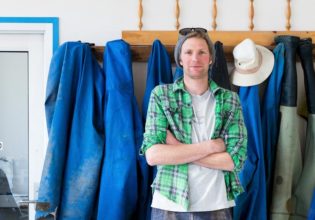 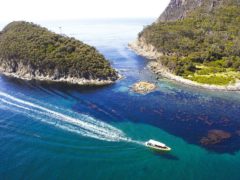 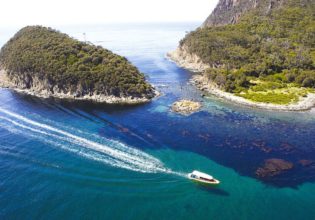 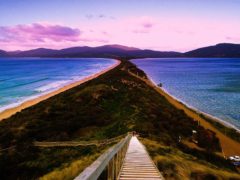 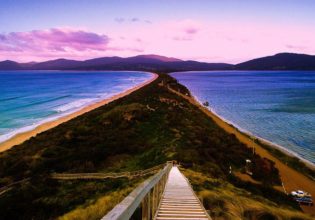 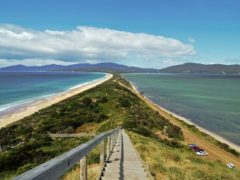 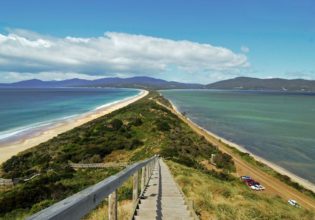