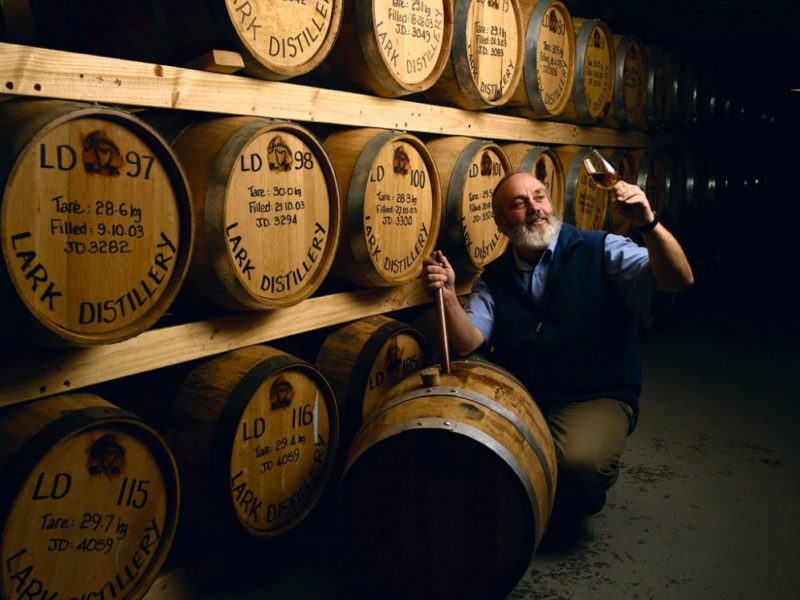 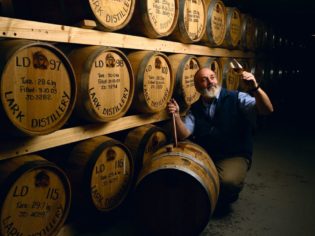 Aaron Smith finds out if a one-day whisky tour of Tasmania’s premier boutique distillery is worth the cost.

“I would prefer barley be fed to pigs than it be used to turn men into swine.” That’s what Lady Jane Franklin purportedly said of the production of whisky when her husband was governor of Tasmania back in the 1800s. The resultant prohibition led to a 153-year distillation drought in Tasmania until 1992, when land surveyor Bill Lark challenged the law.

With the help of some whisky-loving MPs, Tasmania built its first legal distillery since 1839 and in the subsequent two decades, Lark Distillery has gone from strength to strength, winning awards worldwide and even teaching the Scots a thing or two about creating the perfect single malt whisky.

I’m not much of a whisky aficionado, but 10 hours into a day tour of the distillery, I certainly felt like I had made up on lost ground. The one-day Whisky Tour kicks off with a fortifying flat white with Bill at his bar on Hobart’s waterfront, then continues with a drive out to his distillery in the rolling, mist-covered hills of the nearby Coal River Valley. There are just three of us in our group – an intimate tour that guides us through the whole whisky production process.

We arrive at the distillery, an unceremonious tin shed in a paddock, in time to see the toasted barley be crushed and hand-mixed with warm water to make the “mash tun” – 1300 litres of sweet porridge that is drained into a large stainless-steel vat, known as the “underback”, before being piped into smaller vats for a week of fermentation. It then goes through two rounds of distillation before being finished off in old port barrels for a number of years.

Although we learn about such things as the government’s “sin tax” on spirits and how the evaporative “angels’ share” puts enough alcohol in the air to cloud one’s judgment – it’s not all about drinking. Our jovial tour guide, Mark Nicholson, says, it’s “a day of whisky, wine, food, art and history”, but having said that, by 10am we are all half-cut on a selection of Bill’s breakfast whiskies.

The sun had certainly not yet reached the yard arm. To help find our legs, Mark whisks us off to the nearby historic village of Richmond, where we stop at Australia’s oldest Catholic church and cross Australia’s oldest bridge before taking Devonshire tea in the former police-station-turned-café.

Back at Lark, we sample more whiskies at various stages of production and see how Bill perfected a unique technique of smoking his barley with Tasmania’s distinctive sphagnum moss peat, which gives his whisky its sweet, smoky terroir flavour. Then we cross the road to neighbouring Meadowbank Estate Winery for a round of wine tasting, while Mark reads the doggerel verse of Tasmania’s “flawed history” of winemaking, carved artistically in the cellar-door floor.

With full bellies, we are returned to Bill’s bar in Hobart, where he presents us with Tassie antipasto and a few dark ales of Moo Brew, made at nearby Moorilla, also home of the Museum of New and Old Art. Bill then rounds off our day with a glass of his award-winning whisky liqueur, Slainté.

Although this may sound like a boy’s own adventure, Mark insists that a third of his tour groups are women, and says it’s the girls who tend to be most passionate about whisky. In fact, Bill’s wife Lyn has the Midas touch for distilling Lark’s liquid gold, and his daughter Kristy is one of the world’s youngest female whisky distillers.

At $195 per person, it may at first seem a little steep, but when you consider morning tea, lunch, nibbles and plentiful tipples are provided – not to mention learning the tricks of the trade – this adults’ Willy Wonka-style adventure is a steal at $19.50 an hour.

Aaron Smith, who paid his own way and visited anonymously, says: “‘A world of peat smoke and passion’ is how Lark Distillery describes their tours, and it certainly is that. From the heady scent of barley and peat to the enthusiasm of all of those who work in this family-run, boutique distillery, you can’t help but come away in high spirits.”

Where The tour starts at The Lark Distillery Cellar Door, Whisky Bar, 14 Davey St, Hobart – but they can also pick you up at your hotel.
Notes Tour groups are small, but they need a minimum of three people unless you want to pay a premium. The day-long whisky tour is $195 per person. If you are super-keen, there is a two-day tour ($375) and even a four-day Whisky Experience tour ($2100), where you visit the Central Highlands and mine your own peat, then enjoy degustation dining with an international selection of rare malt whiskies.