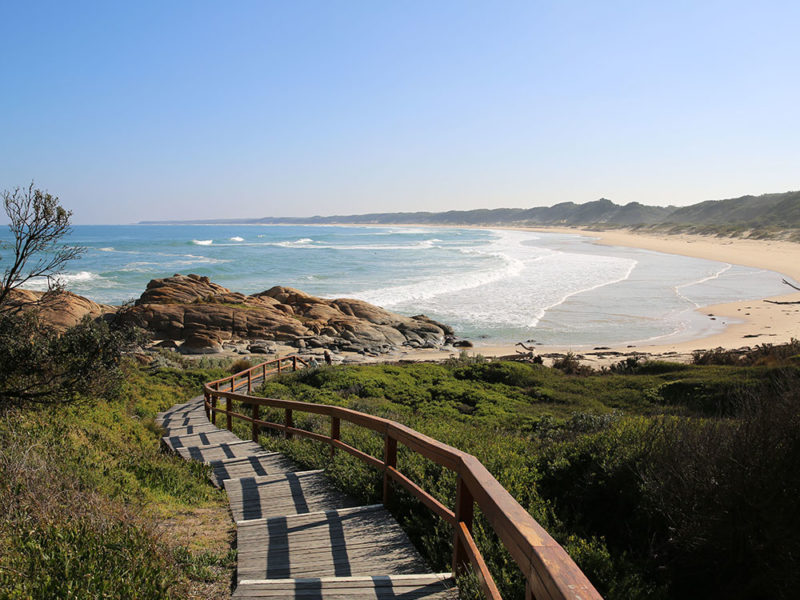 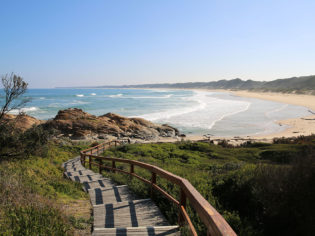 | THIS ARTICLE WAS CREATED IN PARTNERSHIP WITH Destination Gippsland |

THIS ARTICLE WAS CREATED IN PARTNERSHIP WITH Destination Gippsland

East Gippsland –Victoria’s far-north-east corner – has always been a back-to-nature adventure playground, where the state’s largest lakes and one of the country’s most iconic rivers (the Snowy) spill into the sea.

With most of the region protected by national parks, and a stunning 100km-long coastline untouched by urban development, it really is the wilderness coast. Sadly, much of that wilderness was affected by the devastating bushfires last summer that made headlines around the world. One area that didn’t make the front pages – despite being one of the worst hit – was also one of the most cherished, Cape Conran Coastal Park, near the tiny town of Marlo 420km east of Melbourne.

Much of that wilderness was affected by the devastating bushfires.

The fire, which started at the end of November in 2019, raged through the Gippsland forests for more than two months, finally hitting Cape Conran at the end of January 2020. The effects of the high-intensity blaze were catastrophic, and more than 80 per cent of the park was burnt, including much of the park’s infrastructure, the ranger’s office, boardwalks and access stairways, cabin accommodation and the wilderness retreats.

More than 80 per cent of the park was burnt.

Parks Victoria has been hard at work in the past months, rebuilding and repairing. While many of the walking trails are still being cleared and rebuilt, the popular Banksia Bluff campground reopened to campers in late September, along with the picnic area at nearby East Cape Beach, including brand-new amenities.

Fire raged through the Gippsland forests for more than two months.

The boardwalk and access steps at East Cape is still under construction, but the one at West Cape in the southern section of the park, has been rebuilt. Made from locally sourced hardwood, it spans 40 metres to connect West Cape and the Salmon Rocks beach, providing access back to the beach. It’s a fantastic spot for diving –Beware Reef is home to kelp forests, Maori octopus and 30-metre-high rock pinnacles as well as two wrecks – and the rock pools are full of fascinated snorkellers at low tide.

Greening out in nature

But nature has a way of healing itself, particularly here in Australia where many of the plants rely on fire to reproduce. It’s a rare opportunity to see nature at work and a fascinating glimpse into how brilliantly our coastal ecosystems work. Many of the eucalypts are covered in green epicormic shoots, and the banksia trees at Banksia Bluff are already shooting new shoots. Look up into the branches and the blackened banksia cones have opened up, scattering their seeds and the ground beneath the charred trees is littered with tiny banksia seedlings.

Nature has a way of healing itself.

The trees may be a bit barer than normal, but the beaches are as spectacular as ever and the diving is still spot on. But it’s the wildflowers that you have to see to believe. With the shrub cover gone, the heathlands are carpeted in blooms, many of which have been dormant for decades, waiting for the right time to emerge from the sandy soil.

The beaches are as spectacular as ever.

In spring and summer there will be more than 100 species flowering. Most are tiny and delicate, like the fingernail-sized lady finger orchids, sundews and sun orchids. Some, like the salmon sun orchids, haven’t been seen here for years. Others, like the pink trigger plants, bluebottle daisies, bright yellow everlastings and purple kangaroo apples are easier to spot. Head to the helipad and you’ll find, mixed in with the orchid colonies, swathes of native bluebells.

Diving is still just as magical.

The most spectacular sight will be in mid-summer, when tens of thousands of grass trees spikes will burst into flower, attracting honey eaters and other nectar-feeding birds. It really will be an amazing show, and one that will happen next summer as well.

Of course, Cape Conran is not alone. The summer inferno blazed across such a large area of Gippsland that there are several other towns and destinations that were also affected by the fires, but they, too, are on the comeback trail, beginning to flourish again as the forests around them reshoot and visitors begin returning after the pandemic lockdowns of 2020.

How to plan a regeneration road trip

A trip along the coast from Bairnsdale, where the A1 hits the watery wonderland of the Gippsland Lakes around 3.5 hours’ drive east of Melbourne, north to Cape Conran and beyond to Mallacoota near the NSW border, makes a great Gippsland Regeneration Road Trip.

Plan a regeneration road trip to witness the incredible comeback of Cape Conran.

Highlights along the way include Victoria’s largest wild koala colony on Raymond Island at Paynesville, and the beaches, rail trails, cycleways and fresh seafood at Lakes Entrance. If you’ve got time, take a side trip up into the hills to the historic gold rush village of Omeo at the base of the Great Alpine Road. Gold was first discovered here in 1851; the rush reached its peak in the 1860s and the town was infamous for its lawlessness. While the locals are much more law abiding these days, but many of the historic buildings remain, including the town’s original courthouse, the log lockup from 1858. The blacksmith shop, stables and waterwheel also remain in the historical park in the town centre.

Stop at Marlo for lunch on the deck of the Marlo Hotel overlooking the mouth of the Snowy River – the local pippies and mussels in lime and coconut are worth the journey alone – and stretch your legs on the 5km Snowy River Estuary Walk before you get to Cape Conran, which is only 15 minutes’ drive from Marlo.

Heading north, the Wild Ryes Bakery Café & Coffee Roasters in Cann River do great pies and good coffee, and it’s worth a stop before winding through the forests to Mallacoota. With the understory gone, the tree ferns have thrived and it’s a rare chance to see them. Like Cape Conran, the forests around Mallacoota were damaged by the flames, but the expanse of waterways of the Mallacoota Inlet are still as spectacular as ever.

Summer in East Gippsland has never looked so good.

Getting there: Cape Conran Coastal Park is around a five-hour drive east of Melbourne, via the A1.

Staying there: Bookings are essential for all campsites at Banksia Bluff: www.parks.vic.gov.au.  Because Cape Conran is a coastal park, rather than a national park, you can bring your dogs with you as long as they stay on a leash.

Grafton! Come for the Jacarandas, stay a little longer!

To help visitors get the most out of this glorious part of the world, we’ve put together a fabulous three day itinerary.

Grafton! Come for the Jacarandas, stay a little longer!

To help visitors get the most out of this glorious part of the world, we’ve put together a fabulous three day itinerary.

Converting old railway tracks into cycleways has long been a trend in Europe – now Australia is answering the call. AT saddles up for a taster (and...