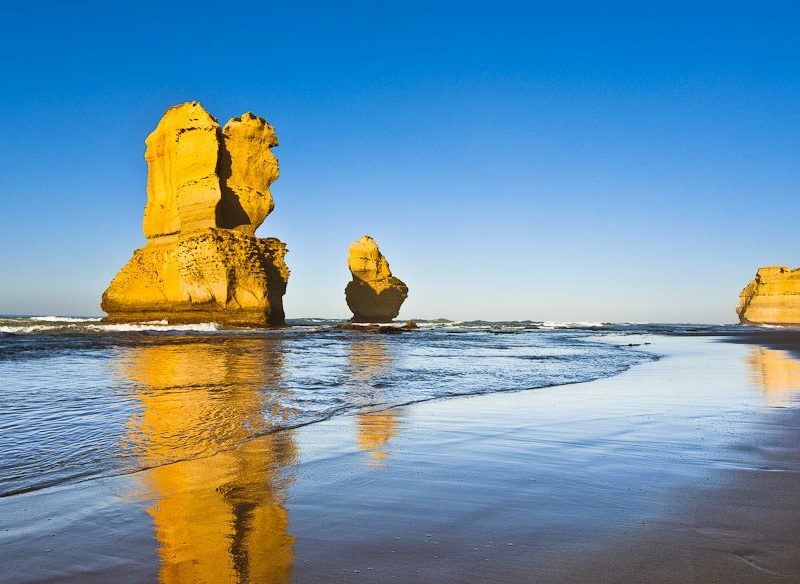 It’s not just for the tourists. This Australian must-do experience is one that many of us don’t quite get around to doing. Quentin Long discovers the error of his ways

It’s a dangerous game being a tourism icon. On the plus side is big visitor numbers, from which sprout small businesses, whose employment grows towns and gives the next generation of locals work in their home sticks.

On the downside, there are people like me. Due, perhaps, to snobbishness and a misguided travelling elitism, I tend to think that if it is an “icon”, it is already ruined and therefore needs no consideration. I am a traveller after all. I’ll leave the icons to the less sophisticated tourists.

This silly snobbishness may just explain why, in our eight-and-a-half years of publishing Australian Traveller, we have never actually dedicated an entire feature to the Great Ocean Road. We have covered it as part of longer features, and best-ofs, but the GOR itself – well, that’s just for the international bus tourists and the Melbourne ad execs who have a McMansion weekender in Lorne.

Now that I can own up to this oversight, I am embarrassed.

WHY IT IS THE GREATEST

“Oh my God, it’s the 12 Apostles!” I exclaim as the GOR, just past Princetown, rounds a mound to reveal the huge sentinels that stand as final courageous warriors against the advancing sea. The first two appear like meerkats peeping above the cliff edge before I spot the rest of them silhouetted against the ocean.I am actually on the phone (hands-free, officer) at the precise moment I first lay eyes on them, so my reaction gives the caller a bit of a surprise. “Oh my God!” I exclaim again. And so it goes on for another minute.

And that’s what makes the GOR great. It is a deserved icon and stands up to the examination of such snobby “travellers”. I was expecting to be a little dismayed by a ho-hum experience; looking down upon the silly hordes of bus tourists. They are there, admittedly, but we are all in it together.

Parking at the visitor centre, I make my way to the clifftop lookouts. The cliffs are like a huge Violet Crumble – soft and flaky against the oncoming sea. The Apostles are very beautiful.

But if the 12 Apostles are majestic in their losing battle against the sea, Loch Ard Gorge is a beguiling jewel. A sometime oasis of calm and meditation, the gorge can become a dangerous, thundering beast – lovely to watch from a safe distance when the seas are up. The sheltered cove is stunningly picturesque, the opposing cliff faces nearly meeting at the mouth of the gorge, protecting the pretty little beach. If it were in the Bahamas it would be the most famous beach in the world.

SUMMER HAS A HOME
If summer had a home in Australia, it would be Lorne. It’s one of those gorgeous, “appropriately developed” seaside towns where wearing shoes is overdressing, the cafés sit comfortably next to upmarket restaurants and the local milk bar is still slinging milkshakes and greasy potato scallops to golden kids.
In the height of summer Lorne is exciting but a little crowded, and as January closes the locals remain, and lucky travellers who seek out the shoulder-season deals move in to make the most of the stunning coastline.

Lorne is set against the beach with just the Great Ocean Road separating the perfect right break from the cafés and shops. Even in the height of winter, the dedicated surfers make the most of the freezing water because the waves are at their best and least crowded.

The high temple for many surfies is back up the road towards Geelong, just outside Torquay at Bells Beach, home of the Bells Beach Classic and the birthplace of professional surfing. This is the Surf Coast after all.

Torquay was a mystical place to me as a kid. Iconic surf brands Rip Curl and Quicksilver both started in this little town. I remember spending an entire summer in Rip Curl boardies and wondering where in California Torquay was.

The actual beach at Torquay is pretty, but not necessarily that amazing. Further down the road at Bells Beach itself, I park next to a stereotype: a combi van with a surf motif on the back. Two middle-aged guys look at the beach with wonder – and a little disappointment, as the waves are not up.

Lorne and Apollo Bay may bookend the most gorgeous stretch of bitumen in Australia, but in its centre is a real find. The Wye River General Store and Café is a genuinely awesome little eatery where excellent coffee is matched with fantastic pastries and food. Saved in 2008 by two Melbourne café and bar
proprietors, the General Store and Café is so good that stopping off is absolutely mandatory, no matter how little time you have.

To most locals and visitors, the Great Ocean Road is the 40-minute stretch of motion-sickness-inducing, cliff-hugging curves between the very chic Lorne and the more laid-back Apollo Bay. The drive is stunning and truly unrivalled in Australia. Around every corner of the 45-minute journey is another jaw-dropping vista to be greeted with an ooh and an ahh.

But when you have finished with the spectacular part of the road and wound past Apollo Bay, the lesser-known and perhaps more appealing (to my inner travel snob) Great Ocean Road reveals itself.

Cape Otway National Park nurtures a lot of the best of the Great Ocean Road region. The national park is so full of koalas they cause hazards, as cars pull over willy-nilly to take photos and generally admire their round behinds wedged in trees.

The coastal walk, aptly named the Great Ocean Walk, is a long hike at 106km but it does take in the most pristine area of Cape Otway National Park – unseen by most who stick just to the road. The walking track is well maintained. Guided walks vary in professionalism and value.

At Cape Otway Lighthouse, I meet my first ever ex-lighthouse keeper. Pat Howell still looks the part – with a wild beard, gnarled arthritic hands and slightly wild stare. He is a very funny man but turns a little melancholy about the demise of his profession.

“You were here for the light and what it meant to the ships,” he tells me as I try and understand what drives a man to love the loneliness and solitude of lighthouses. “That’s what I loved about it. The sense of duty to the light and ships.” It helped that his wife liked being a lighthouse keeper too. To this day, he spends several nights a week as caretaker of the lighthouse and its immaculate grounds.

JUST WHEN YOU THOUGHT IT COULDN’T GET PRETTIER
Leaving Cape Otway, I pass through the epitome of green, rolling, bucolic valleys at Ayr, then on to Johanna Beach via the weirdly named Red Johanna Road. (There is also a Blue Johanna Road, which leads to the same place – although Blue is windy and longer.)

Johanna is another beautiful beach, and probably the best campground on the whole of the Great Ocean Road. It’s right next to the beach and well serviced. I’m staying at one of the beautiful little Johanna Seaside Cottages: simple and comfortable accommodation with gorgeous views – but if I were camping, that’d be the spot.

Back on the GOR, Lavers Hill is a lot like Geelong – best seen from the rear window. I pass the Apostles to stop at Australia’s cutest town, Port Campbell.

Port Campbell is a couple of sleepy streets, a Best Western, a bakery, a pub and a Greek restaurant that serves authentic taramasalata, a Greek-style chicken parmi and the best whitebait I have ever eaten. The entire town is orientated towards the long finger of water that curls around the headland and laps at the beach in the middle of town. It is so unbelievably cute and quaint it seems to be almost fantastical. And it will remain so for a long time. The 2004 Great Ocean Road strategy has deemed it not appropriate for development, driving developers back to larger centres like Apollo Bay and Warrnambool.

All in all, the Great Ocean Road is the rarest of beasts. It’s a stunning attraction that is always enthralling no matter what season, weather or time. You won’t catch me saying this often, but the longer the journey on this road, the better.

Where to stay //
Most accommodation is B&B and holiday rentals.
SEAFOAM VILLAS
Comfortable and modern self-contained units right opposite the beach in Port Campbell. From 14 Lord Street, Port Campbell, (03) 5598 6413; seafoamvillas.com.au
JOHANNA SEASIDE COTTAGES
Cute, unpretentious, self-contained cottages, 10 minutes from Johanna Beach. From about $220 a night, two night min.
395 Red Johanna Road, Johanna, (03) 5237 4242; johannaseaside.com.au
GREAT OCEAN ECO LODGE
Fantastic hosted stay in a conservation centre on the road to the Cape Otway Lighthouse. Accommodation includes the dusk walking tour of the property and feeding the tiger quolls. From $350 a night incl. continental breakfast.
635 Otway Lighthouse Road, Cape Otway, (03) 5237 9297; www.greatoceanecolodge.com
ROTTEN POINT HOUSE
A beautiful luxury four bedroom, two bathroom home overlooking but without access to Johanna beach, but it has a private road entrance off Evans Track. From $670 a night, two night min.
Evans Track, Johanna Beach, (03) 5237 4201; www.rottenpointhouse.comEating //
Most of the places in Lorne and Apollo Bay are ok. Here are some picks.
MARKS RESTAURANT
Known as the best restaurant in the region – but annoyingly, closed May to August
24 Mt Joy Parade Lorne 3232, (03) 5289 2787.
OVENHOUSE RESTAURANT
Simple food, decent wine list, pizza is quite good.
46a Mountjoy Parade, Lorne, (03) 5289 2544.
ROOM SIX
Best whitebait I have had and quirky fusion like a Greek Style Chicken Parmie.
28 Lord St, Port Campbell, (03) 5598 6242
THE RIDGE ORGANIC FOOD AND CAFE
Not strictly on the GOR bur make the detour for the best food in the region handled with love and care by Sue Ladewig and Ray Cooper.
20 Gardner St, Beech Forest, (03) 5235 9273

Walking //
BOTHFEET
Bothfeet offers the most sophisticated guided experience on the Great Ocean Walk. Stay at a gorgeous Japanese-inspired lodge, eat beautiful food provided by the in-house chef, have a foot soak at the end of each day… The lodge is open from September to May. bothfeet.com.au