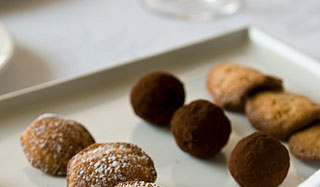 Tom Barclay traces the growing exodus of Sydney master chefs to Melbourne – in particular to the stunning new Bistro Guillaume at Crown Casino.

In a Diaspora of almost biblical proportions, Sydney’s elite chefs have been heading to Victoria to hang their shingles in Melbourne’s bling capital: the Crown Entertainment Complex. The latest and potentially most successful to date is Guillaume Brahimi, who created a stir when he won the contract for the old Bennelong site at the Sydney Opera House and created Guillaume at Bennelong in 2001.

In Melbourne, Guillaume has opened an up market bistro with all the French trappings of his homeland’s traditional diners. The bar beneath street level is so inviting that pre-dinner drinks almost turns into no dinner and all drinks. Apparently based on the legendarily cool Hotel Costes bar in Paris, it’s comfy, enticing, incredibly intimate and a great way to get into the Parisian frame of mind.

Upstairs we’re seated at a very simple traditional bistro table. The entire dining area is wonderful, designed by the same company behind Sydney’s Ivy and Est. Draped in cloud-like light fittings, the very black and white interior isn’t at all intimidating or stark.

The ribbons of in-house smoked salmon with crème fraiche and toasted brioche were delightful; delicate flavours that show up commercial smoked salmon as the ugly brutish imitation that it is. The brioche was a revelation; buttery, soft, tasty, yet airy.

My partner’s beef daube in red wine on a bed of pureé de pommes was superb. French sauces can be far too heavy for her delicate palate, yet I had to fight to get a mouthful. It was rich, yet lighter than a traditional French heart-attack sauce. The wagyu cheek was like fairy floss.

My fish and chips was a little disappointing. Masterfully produced, the dramatic fish arrived with tail curled as though in mid leap. The whiting is completely de-boned then cooked – a real achievement. The leaping fish is trampolining off Jenga blocks of thick-cut pommes Pont-Neuf, which were slightly oily for my tastes. The flavour of the fish didn’t come through as much as I’d have liked, since the beurre maitre d’hotel and oily chips stole some of its leaping thunder.
To finish, the soufflé de jour got the nod over the Crème Brulée, selection of sorbets, petit fours and tarte au citron. Ooh la la, simply astonishing.

We left the wines to the sommelier, who did a fine job of matching each dish with a different glass. The wine list is impressive but has been widely reported as excessively marked up.

It’s a little jarring to leave such a fine, classically French and cultured dining experience and enter the melee that is the Crown complex on a Saturday night. Regardless, the Bistro Guillaume is well done and deserves every acclaim bestowed upon Guillaume himself.