Where to eat, drink and shop in Richmond 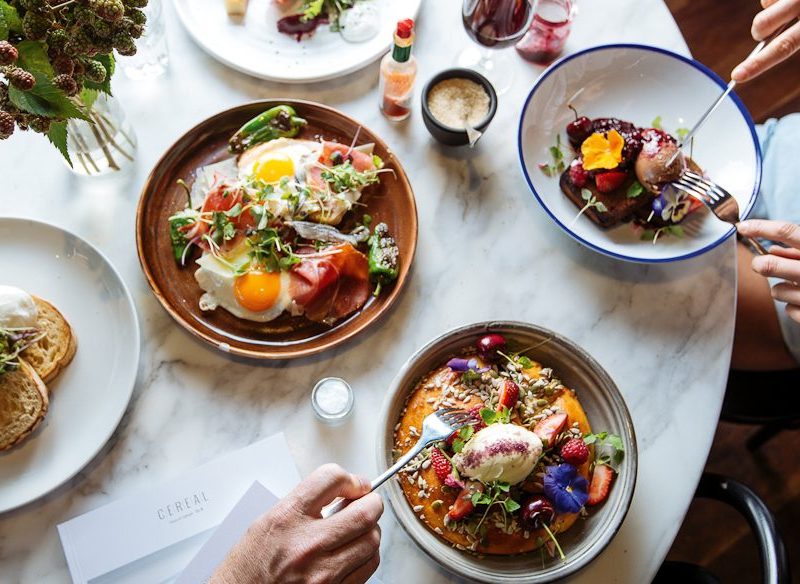 Not sure where to where to eat, drink and shop in Richmond? The gritty inner-city suburb has been dubbed the Next Best Thing in ultra-cool Melbourne hoods.

Less than a decade after Richmond officially became a city, things began to look glum. Succumbing to the depression of the 1890s, affluent locals sought refuge in outer suburbs and the grand homes they left behind became boarding houses for the poor.

During the 1920s, the city became infamous as an underworld, with mobster boss Squizzy Taylor, head of the Richmond Gang, involved in everything from blackmail to murder. To make things worse, the poor suburb became even poorer in the 1930s with the Great Depression.

But ironically it was World War II that brought some positive change to the city: there was a boom in industry (tanneries, brickworks, bluestone quarries…) and with that came a huge influx of immigrants from southern Europe and Southeast Asia.

Fast-forward to the 1980s – when the place was swelling with students, punk rockers and Vietnamese immigrants – and the city became gentrified. Today’s Richmond is a bit gritty and haphazard, which is part of its charm, but there are hidden gems sprouting up all over the place – you just need to know where to find them.

The ’burb is probably most well-known for a road that could make any husband or boyfriend shudder: Bridge Road.

This kilometre-long strip was once a thriving shopping hub of discount outlet stores that people would travel interstate for. However, in recent years a number of these bargain basements to close.

Happily, there’s still a host of stores (Sass & Bide, Bardot, Witchery, Alannah Hill and the like) that have survived and other businesses, such as cafes and other retail stores, have slowly begun to move in.

Start at the western end, closest to the city – it may seem like a bit of a ghost town but don’t let that deter you because it gets better; most of the good shops are in the middle section, as you near the Town Hall.

Breakfast and brunch on Bridge

Fuel up on a homely breakfast at Richmond Hill Cafe & Larder, owned by Australian cook extraordinaire Stephanie Alexander and cheese expert Will Stud.

Be sure to pop your head into the cheese room here, where passionate cheesemongers will educate you with a tasting (they run regular cheese and wine workshops, too).

Another great option for breakfast is Touchwood, a local’s fave with a great all-day breaky menu and a clean, urban design.

If you’re around this area for lunch or dinner and want to up the ante on sophistication, Mister Jennings is a pretty spiffy chap who serves a sleek tasting menu with matching wine. Headed by Ryan Flaherty (of Fat Duck and El Bulli fame), the menu includes high-end and innovative dishes such as kangaroo carpaccio and boudin blanc dagwood dog.

Pick of the bars and pubs

Boutique beer lovers will get their kicks at Slow Beer Store and Cafe, the country’s first dedicated craft beer store, offering a changing menu of four beers on tap, which you can take away in growlers or enjoy in-store along with plates of artisan cheese and charcuterie.

But if it’s a Carlton Draught you’re after, head on down to the very eastern end of the road where you’ll find The Bridge Hotel.

From the outside it looks like an average pub, but inside you’ll find a building split into two with an outdoor European-style cobblestoned laneway running through it.

The menu is a good mix of modern and traditional dishes – from crispy beef salad with nashi pear, chilli and roasted peanuts to good-old chicken parmy. On Friday afternoons they host Karma Kegs Happy Hour at 5pm: all proceeds are donated to community initiatives.

Time for a walk

Across from the pub is the Amora Riverwalk – a contemporary hotel overlooking the Yarra River.

There are 40 kilometres of walking and cycling tracks around the river and guests can get out and explore them using the hotel’s complimentary bike hire – better still, order one of the picnic hampers to take with you (from $170 a night; melbourne.amorahotels.com).

From here, a 10-minute walk south will bring you to Swan Street, the beating heart of Richmond.

Just one block away, Feast of Merit is also a top pick for breakfast; owned and run by YGAP, all profits go back to supporting youth education projects. So you can dine on the Forbidden Breakfast (crispy salted pork belly, fried egg, zhoug dressing and za’atar flatbread) and not feel so guilty after all.

After a good feast, it’s time to explore some of the cute boutique stores along Swan Street. Lily and the Weasel stocks local products from independent designers and artists, natural products and handcrafted pieces for the home.

We love the candles from Melbourne-based designers The Luxuriate that come in gorgeous marble jars and your choice of copper, gold or black lids. And for your fashion fix, Royal Order of Nothing sells men’s, women’s and kids’ clothing from brands such as The Fifth Label, ELK and Elwood.

They also stock some quirky accessories such as a whimsical necklace and charm collection by Sydney-based designer Kirstin Ash.

Men who are in the market for a new haircut or beard trim best stop by the very cool Dr Follicles barber shop (03 9416 3999). No ordinary barber experience, here you’ll find kitsch décor, hipster barbers, and free beer for every customer. They don’t take bookings so get in early.

Lunch or dinner on your mind?

Time to get multicultural – try Fonda for relaxed, delicious Mexican fare. The Feed Me option is great value – for $49 you get tortilla crisps and guac’, corn on the cob, fish tacos and pork quesadilla.

Or if you fancy something lighter – one of Swan Street’s newest and hippest eateries is Saint Urban. Located in a once dilapidated building now gorgeously restored, this bistro-style venue is the perfect spot to enjoy a glass of wine and a cheese board.

Whereas meat lovers are spoilt for choice at Little Bertie hidden behind Berties Butchers, which claims to be the oldest butcher in Australia. Located in a car park – stay with me – this barbecue smokehouse has a changing menu of succulent meat: pulled pork or lamb shoulder or pork belly served on brioche buns with delicious chunky chips.

Running perpendicular is Church Street, famous for its furniture and décor stores (frequented by the folks from The Block). Some of our faves include Jardan, Coco Republic, Matt Blatt, Meizai and super cute décor shop The Woodsfolk, to name but a few. If you’re in the midst of a redesign, this is the place to peruse some beautiful pieces.

Church Street leads down to South Yarra, where there’s another brilliant place to stay: The Olsen, an eclectic Art Series hotel graced with the work of Australian artist John Olsen. The view from the rooftop pool is fabulous.

If you’re staying down this end of town, there are some great spots for dining back on Church Street. An absolute highlight is Kong. This Japanese–Korean restaurant is a loud, bright and buzzy place where diners are packed in together on rows of communal tables. But the service is spot on and the food is amazing.

Another excellent place, perfect for a long, lazy brunch is Top Paddock . Helmed by the guys behind other cracking Melbourne establishments Three Bags Full and Two Birds One Stone, the food offering here is tasty and hearty. But what people really come here for is the coffee, brewed in a warehouse a few minutes down the road.

I passed this cafe several times during my stay in Richmond and saw a queue of at least 10 people out the door each time (and yes, it’s worth it). Get in line, because there’s probably no better way to top off a weekend in Richmond.