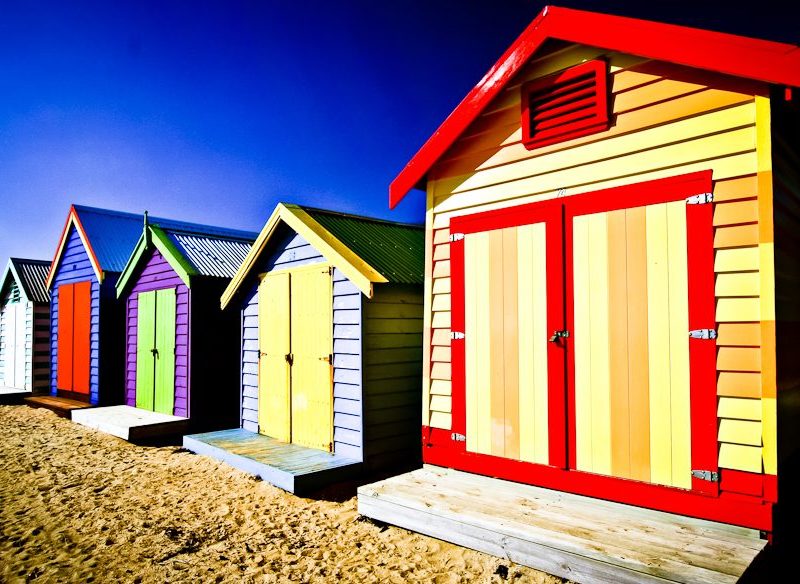 Brighton beach in Victoria is Just Like its overseas counterpart, Brighton Beach, England’s most famous seaside resort. Can’t afford to travel to England’s most famous seaside resort? Or think of a good enough reason, since we have 7000 beaches of our own? Fear not: there’s a spot near Melbourne with enough bathing boxes to satisfy all your UK urgings. By Peter Robinson

In my back yard I have a neat row of colourful bathing boxes. At the moment these much-loved sheds are politically correct. But it wasn’t always so. In the past 40-odd years the once-decrepit, straggly array of weather-beaten sheds has been variously washed into the sea, vandalised or burned. Council, state government and some residents have, at times, attempted to have these beachfront eyesores removed permanently.

Some of Port Phillip Bay’s 2000 bathing boxes and boatsheds have been lost, but the 82 at Dendy St are heritage-listed, thereby conferring legal protection upon them . . . for now. But why are they there? In the late 1800s (the Victorian era), bathing in the open sea was not permitted outside proper sea bath enclosures. There was also a taboo against the sexes swimming together, with different session times for the sexes, and also considerable prudery about the bathing costumes.

There was a custom, later enshrined in council bylaws, which stated the swimming costume had to cover the body from neck to knee. Local bylaws also stated that a swimmer must walk in a straight line from the water over the sand, then don clothes or enter a bathing box. It was illegal to linger on the beach in a bathing costume.

These incredibly strict rules were widely breached and led to many letters to the local press and occasional attempts to police it. In 1913 two men were fined for sitting on a Mentone beach in swimming costumes and others had been reported to be “sunning themselves in tight-fitting garments on Mentone pier in a state of semi-torpor.”

By the 1920s the rules were widely flouted, and even the custom of segregated bathing was broken down. One by one, as the sea baths were damaged by storm, fire or neglect, they were removed (only the baths at Middle Brighton remain). The rest, as they say, is history. Many old-timers reminisce, praying for a return to the days of tight-fitting costumes and semi-torpor.