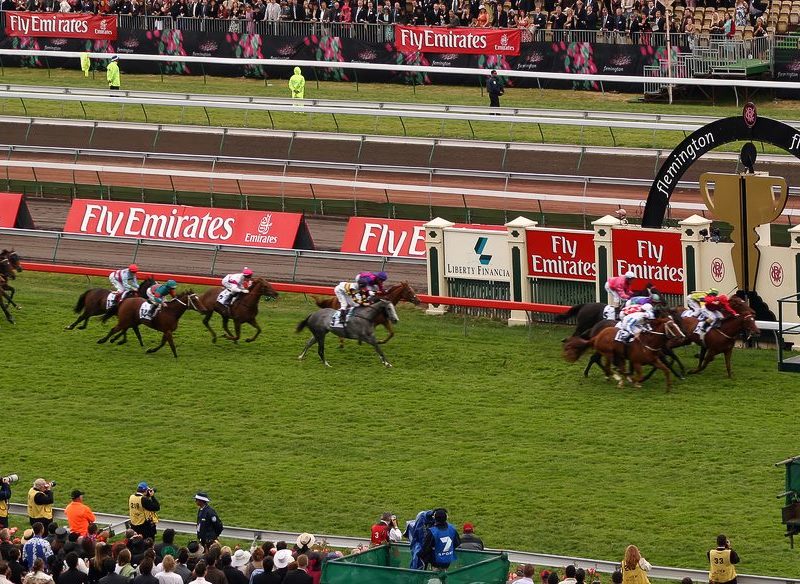 A beginners guide to travelling to the race that stops a nation, The Melbourne Cup.

Thinking of stopping by at the race that stops a nation? Not without this step-by-step beginners’ guide. By Matt Cleary

Like a herd of wildebeest crossing the savannah, like a school of fish turning on the whim of the group mind, we humans like to gather and do the same thing. It’s a celebration of our togetherness, our humanity. In Australia, on the first Tuesday of every November since 1861, the mass mind focuses on The Melbourne Cup: the race that sees 20 million of us down tools and bet on horses whose pedigrees could be as mysterious as a random wildebeest.

For Victorians, who sensibly get the day off (I’ve never understood this – why can’t the rest of us junk one of our a “bank” holidays and join them?), it’s all about Flemington. And while it’s not (yet) the law that the rest of us should visit the place at least once, here’s what to expect if you’re making the pilgrimage.

Getting there
“Avoid traffic and catch the train,” advises Suzi Wilson from the Victoria Racing Club. “Every few minutes special race trains depart Flinders St (Platforms 8 and 9), Spencer St (Platform 14) and North Melbourne (Platform 6). Alternatively, City River Cruises ([03] 9650 2214; www.cityrivercruises.com.au) operate ferry services from the city centre to Flemington along the Maribyrnong River. Or arrive in style aboard the ‘Cup Cruiser’ with Antler Marine ([03] 9376 3888).” Money no object? A one-way, five-minute trip from Melbourne CBD is $200 ($330 return) with Aussie Copter Helicopters (www.aussiecopter.com).
Hot Tip: Driving to the track is a parking and traffic hassle you don’t need. Steer clear.

Securing a spot
“The Cup attracts more than 100,000 people, so the best way to guarantee a seat is to book early through Ticketmaster (www.ticketmaster.com.au),” advises Wilson. “There are vantage spots everywhere and the race is shown on multiple big screens.” And how does one get into The Members? “Get chummy with a Member,” says Wilson. “That person can give you the use of a Guest Pass for the day. Or become a Member by applying to the VRC Membership department (www.vrc.net.au).”

And the difference between “the outer” and the Members’ area? “There’s more elbow room and no reserved seating in the Members,” says Wilson. “You also have to dress up. Ties and jackets are compulsory for men. In ‘the outer’ there’s no dress code. It ranges from top-hat-and-tails to people dressed as gorillas.”
Hot Tip: Get yourself a copy of the course map at www.vrc.net.au and get in early to stake a strong position near the “facilities” (that’s the bar and the toilets).

Getting it on
There are two ways to bet on The Cup: the TAB and bookmakers. At the TAB you front a teller and tell the friendly person that you’d like to bet on a horse or horses to:

Hot Tip: The Melbourne Cup is a race for “stayers”, so look for horses with good form over distances from 2000m to 3200m.

Getting on it
Now, what exactly is The Birdcage? “It’s the most sought-after spot at Flemington,” says Wilson. “It’s accessible to a limited number of people: guests of race sponsors and VRC Full Members. There are rows of marquees, all elaborately decorated, built and designed with no expense spared.”

Can’t infiltrate this gilded prison? Despair not. There are plenty of good spots to make your own fun, although racegoers can’t bring alcohol into the course: “Security personnel check everyone’s bags,” says Wilson. “But there are scores of outlets for buying inside.”
Hot Tip: Melbourne being Melbourne, the weather could be anything from hot with showers, windy with hail, or tornado with acid rain. Pack an umbrella.

Staying out of the poor house
Back a winner? You beauty! But be careful. As Eddie Chapman from the Council of Gamblers Help Services says, “Those who win with their first bets are thinking, ‘This is too easy!’ which can be dangerous. An early ‘win’ can be a serious risk factor for problem gambling. Winning on a regular basis is impossible. Treat gambling as entertainment which costs you money, not as a source of income.”
Hot Tip: Set a budget and stick to it.