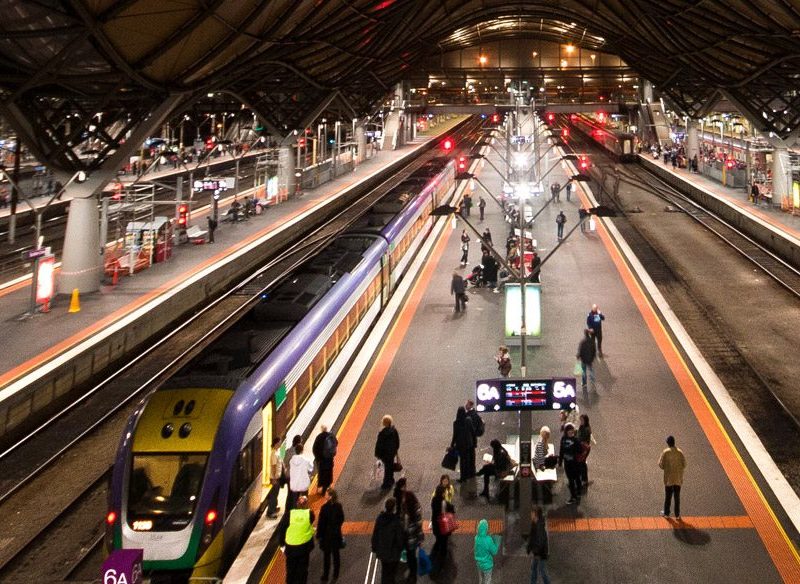 Melbourne Trainspotting (Minus the Trains)

If you think you know Melbourne like the back of your hand, here’s a different tack that allows for a whole new level of intimacy. Words and Images by Tim Richards

Been to Melbourne a million times already? Trawled through all the tourist sights? Wandered through Federation Square, seen the art at the NGV, haggled at the Queen Victoria Market, roller-coasted at Luna Park and lost a bundle at Crown?

All right then, here’s a different approach to discovering Melbourne: trainspotting without the trains. A number of railway reserves, remnants of unsuccessful rail lines, have been turned into routes for walking, cycling and riding. Though not much visited by tourists, these “rail trails” pass through attractive greenery or by interesting architecture, and allow a certain amount of sticky-beaking into backyards along the way.

Take the former Inner Circle line, which once ran from North Fitzroy across Melbourne’s inner north, past Melbourne Zoo. After this line was closed, an epic battle involving locals, unions and government resulted in the creation of a “linear park”, a four kilometre long thread of green meandering across tram tracks and behind terrace houses.

It’s an attractive walk. Merri Creek murmurs gently below the starting point of Rushall Station, reached by train from the city along the Epping line. Then the trail curves west past the patterned brick homes of North Fitzroy, built in the late 19th Century. It’s fascinating to be traversing a walking trail which is so urban; light industry contrasts with Victorian homes and modern buildings, just a few metres from the former track.

The highlight of the trail is the former North Carlton railway station, now the home of a community centre. This distinctive red brick structure was once the disembarkation point for crowds of footy supporters heading to nearby Princes Park (more recently known as Optus Oval). Then it’s on to the zoo, passing beneath old railway bridges as the track heads west. From here you can stop to see the animals, then return to the city by train from Royal Park Station, or via the No. 55 tram.

The Outer Circle trail is a more challenging walk, and an insight into the leafy middle suburbs less explored by visitors. Developed in the 1890s by land speculators, this north-south line closed down almost as soon as it opened.

The best segment to walk or cycle runs about eight kilometres from Kew to East Malvern. To start, catch a No. 48 tram from Flinders Street in the CBD, getting off at stop 39 near the corner of High Street and Harp Road. Across the road is a woodyard that’s outlived the railway line. Behind it you’ll find the trail, a surprisingly broad expanse of parkland running between houses, with signs marking the original locations of stations. It’s hard to imagine steam trains running through this green space.

Not so in the section beyond Whitehorse Road. Here the trail runs through a narrow cutting, deep below street level and crossed by a series of vintage road bridges. It’s cool in the shade but quite beautiful, with ferns and vines growing down the cutting’s face.

Once past East Camberwell, the trail follows the still operational Alamein line; you can always cheat at this point by catching an actual train. Then the route continues onward from Alamein Station, crossing Gardiners Creek. It’s important to go straight on here; a left turn will have you walking across golfing greens and interrupting shots. A walkbridge crosses a freeway and lowers the walker gently into East Malvern Station, where you can catch another train back to the city.

A third, more obscure trail is the Rosstown Rail Trail, marking a line which linked the south-eastern suburbs of Elsternwick and Oakleigh in the same period of boom and bust. Designed to service businessman William Ross’ sugar beet factory, and carry passengers, it ran just one train in 1888 before closing down. It was dismantled in 1915 and its railway reserves became roads and parks, but the route is signposted and can be followed for its seven-kilometre length from Elsternwick or Oakleigh Stations.

The most pleasant rail trail of all runs from Melbourne’s eastern edge at Lilydale, through the green hills and small towns of the Yarra Valley. The railway was built in 1901 and served the farming and timber industries, along with holiday-makers, until 1965. Now it’s a well-maintained 38km trail winding past vineyards, cattle paddocks and native bushland.

The trail is suitable for horseriding, cycling and walking, with the stretch from Millgrove to Warburton also accessible to wheelchairs. Because of its length, however, those on foot best tackle it in sections, or over more than one day.

A good starter is the section between the towns of Wandin and Woori Yallock.

After catching a train from the city to the Lilydale line terminus, transfer to a No. 683 bus bound for Warburton. The bus stop near the corner of Warburton Highway and Railway Parade in Wandin will set you down near the site of the old Wandin station.

That’s the particular attraction of this rail trail: the station platforms (with replica signs) are still there, though overgrown and slowly mouldering away. Aside from reminding you of the original purpose of the route, they also provide a satisfying set of progress markers along the way. The 11km walk to Woori Yallock is on an easy grade.

At the old Seville station site there’s a picnic area with tables, the perfect spot for a lunch break. Further on, the trail passes by the former Killara station, once serving a sprawling farm of the same name and still equipped with its once-busy stockyards.

Along the way, the walker encounters the occasional bridge above the trail, designed not for humans, but for cattle to walk between paddocks bisected by the railway. There are also wooden bridges crossing creeks, and views to the hills surrounding the valley. Be warned though: this stretch of the rail trail departs from the highway, so the bus is generally a kilometre or two away and there are no shops en route. There are also no toilets, so go before you go.

An easier option is the walk from Warburton back to Launching Place. Not only is this 10km segment entirely downhill, but it sticks to the highway for at least half its length, allowing an easier bail-out via the bus. It also passes through the towns of Warburton, Millgrove, Yarra Junction and Launching Place.

Each has refreshment options, including Warburton’s cafes, the Millgrove general store and classic country pubs in Yarra Junction and Launching Place. Cunningham’s Hotel in Yarra Junction is handy to the old railway station, still intact and open as a historical museum on Sunday afternoons.

There’s a range of other activities available in the vicinity of the trail, including canoeing, fishing, ballooning, archery and golf. There are also several wineries open to visitors. And there’s plenty of accommodation from budget to luxurious. Warburton has the most options, but there are caravan parks, hotels and B&Bs through the valley. For more details of attractions and accommodation, see the rail trail’s official website at www.yarravalleytrails.org.au.

These four routes within and near Melbourne are not the end of the line. There are numerous rail trails set up across Victoria, such as the Murray to the Mountains trail in the northeast, and the Ballarat to Skipton trail west of Melbourne. Visit http://www.railtrails.org.au/ for details. Then keep your eyes peeled for those non-existent trains.