Would you risk a night out dining with strangers? Leanne Clancey did, and here’s what she found.

I thought I knew the back streets of Fitzroy well. I’ve walked these Melbourne streets countless times, but tonight I’m taking detours and seeing things I’ve never seen before – all because of a text message from a stranger.

It pinged on my phone at about midday, from an unknown number. “Hi Leanne. We’re looking forward to seeing you tonight,” it read. This was followed by a set of precise instructions detailing where I needed to be at 6pm and how not to get lost, signed off with a cheeky ‘x’. It’s all feeling very blind date-ish. I like it.

I’ve booked myself in to a Private Dining Room (PDR) dinner, a Melbourne culinary event series that the website describes as an ‘underground dining adventure’. What this actually means is that the venue is a private space (not a restaurant). The location is kept secret until the last minute, as are details of the night’s menu and seating arrangements. Aside from the last-minute text message, the briefing has been scant, which for some people might be terrifying, but for me (someone who eats out for a living and sees unoriginal culinary trends on high rotation), it just makes the whole thing all the more interesting.

I totally get that, for some people, this might feel like a risky way to part with a chunk of their hard-earned in the hope of a good night out. What will I be eating? What’s the place going to be like? What if the people are hideous bores? What if the whole thing sucks?!

For PDR regulars, Maurice (a writer and sometime comedian) and his wife, Fiona (a lawyer), being oblivious to the nitty gritty details of a planned night out is all part of the magic. “The first time we went we took people with us, so it was more like a dinner party hosted by our friends with some additional strangers thrown in,” Fiona explains.

Indeed, when I arrive at the venue – down a cobbled laneway, toward the warm glow of fairy lights and sounds of conversation and clinking glassware – it feels like I’ve arrived at a cool friend’s house who’s thrown a big party with a bunch of friends I just haven’t met yet. I’m loving it.

The evening sky is clear, the air is balmy, and elegantly plated canapés and glasses of sparkling wine weave their way through the well-dressed crowd of around 40 people. Some arrive in pairs, while others, like me, are on a virgin solo adventure just taking it all in, breaking the ice with questions about whether or not it’s our first time and what the garnish on the trout was.

According to Tim O’Donnell, the entrepreneurial Melbourne sommelier behind PDR, stepping out of one’s routine to try something completely different is what people most love about his events. “I think ‘the unknown’ is the most exciting aspect of it,” he explains. “With PDR, that extends to the venue, the menu, the drinks and the company you’ll keep,” he says. “I guess it’s a little adventure; one that people are trusting us to guide them through.”

If you’re into eating out, a quick scout around on the PDR website provides plenty of evidence that Tim is a man with some pretty cool industry contacts. Running monthly, his events have attracted chefs from some of Melbourne’s finest restaurants. Typically, you’ll see sous chefs (rather than head chefs) from top venues stepping into the spotlight for the first time, savouring the freedom that comes with being the boss and being able to do their own thing. It’s their chance to flex some creative and culinary muscle without the usual pressure or expectation of their day jobs, while for diners it’s an opportunity to experience some seriously boast-worthy, one-off magic.

In fact, it was this that attracted Maurice and Fiona in the first place. “It intrigued us because it’s a hospitality insider thing that the public wouldn’t normally be privy
to,” says Fiona. Fellow diner, Anna (a hardcore foodie and industry follower) agrees. “For me, it’s really interesting to see the young up-and-comers get a chance to take charge and run their own kitchens for a night,” she says. “It’s pretty cool to see the food they’re coming up with.”

Sous chef at Collingwood’s acclaimed IDES, Zackary Furst did his first PDR event in an Art Deco boardroom down a Melbourne laneway earlier this year. For him, the experience was a rare pleasure – creatively and professionally.

“As a chef, it’s a great way to push yourself out of your norm and do something you might not usually do,” he says. “It’s a unique privilege and the result can be pretty amazing. For me, it’s all positives when it comes to pushing diners to go in blind with their fingers crossed.”

For diners, the positives are amplified three-fold: you get restaurant-quality food and wine, coupled with the chance to make new connections and experience something entirely unique – something I reckon would be enough to lure people away from their online dating apps.

According to Tim, it’s not uncommon to see previously unacquainted diners exchanging numbers and Facebook details by the end of the night, with friendships forged over great food and wine and the bond of a shared experience.

So what kind of people come to a PDR event? Tim says the primary common thread is “good food and the people who love it. The second thing that our diners have in common is a shared appreciation for the whole experience of our events,” he explains. “It’s a pretty big ask getting people to part with their money when you’re giving them little more than a postcode and the name of a chef,” he admits.

By the end of the night, I too am exchanging numbers and social media handles. I’ve met people whom I’d perhaps never normally speak to. Sure, I’ve anxiously filled a few conversation gaps, but I’ve also laughed and been surprised, delighted and exceptionally well-fed.

“The people who come don’t get here by chance,” says Tim. “They really want to be here, to experience something different. They want to go on a journey with us.” Private Dining Room events run monthly in various locations around Melbourne. 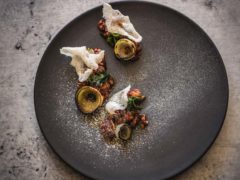 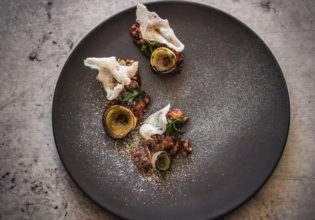 A novel concept inspired by the globe and a young chef with plenty to prove, Lara Picone finds out if Melbourne’s Atlas Dining is undercooked or jus...