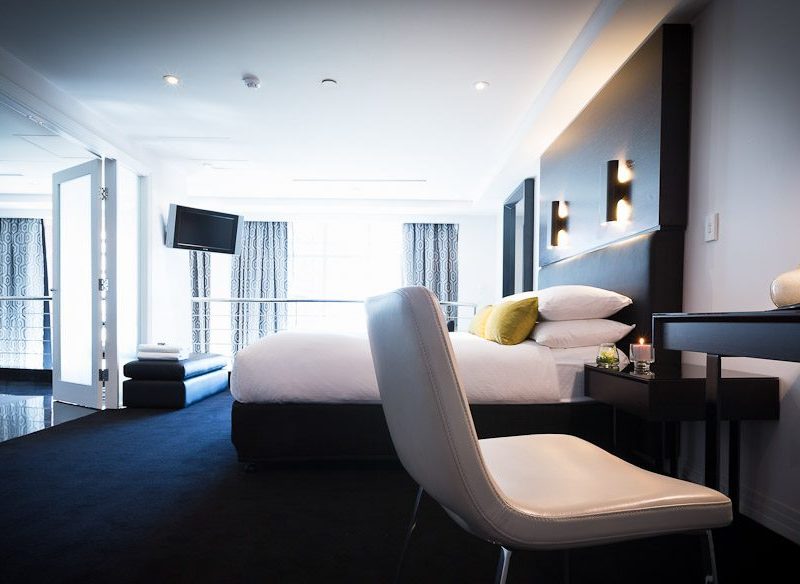 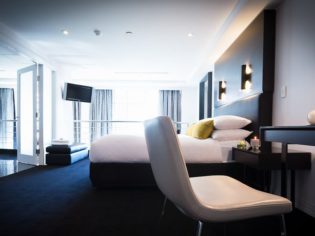 Bruce Springsteen. Kylie Minogue. Michael Buble. Robbie Williams. Since The Como’s grand inception some 22 years ago, it’s played host to visiting rock stars, Hollywood royalty and the movers and shakers of the globe. 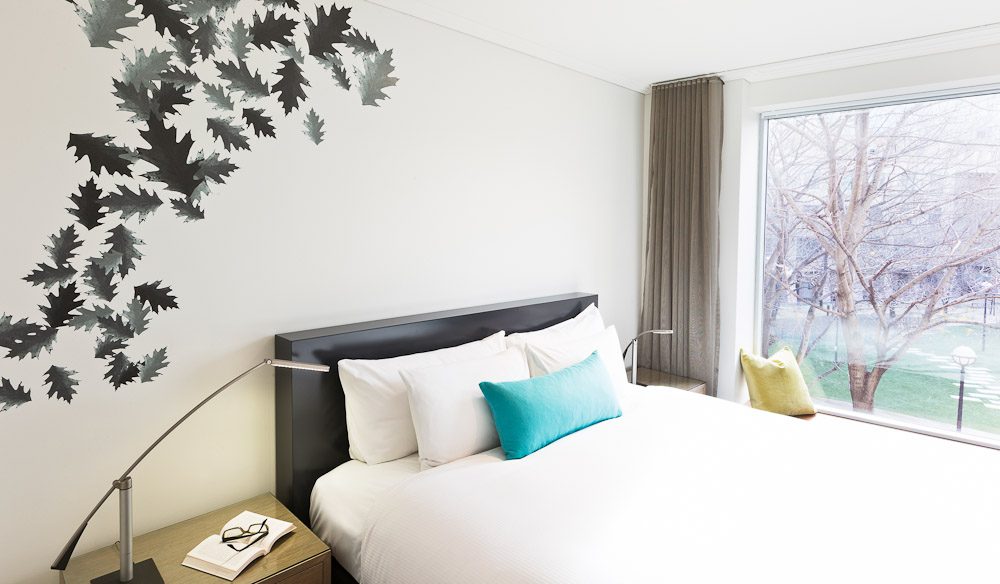 A standard room at the Como Melbourne.

But I can also exclusively confirm that the Como was visited by one less glamorous guest, back in its heyday: a wide-eyed, 13-year-old me.

I had begged and nagged and beseeched my mother for a shopping trip to Melbourne; staying at The Como was the icing on my Chapel Street coup. And what a sweet victory that was. Back then, The Como was the utmost height of style, where attractive businessmen could be found striding importantly through the grand reception at peak hour, and women would pop in during the afternoons with bags and bags of shopping and perfect, Meg Ryan hair. And of course, there was the rubber duck. This humorous little aside, now as common as any ‘personal’ touch in a hotel’s repertoire, was incredibly avant-garde at the time. Much like The Como itself. 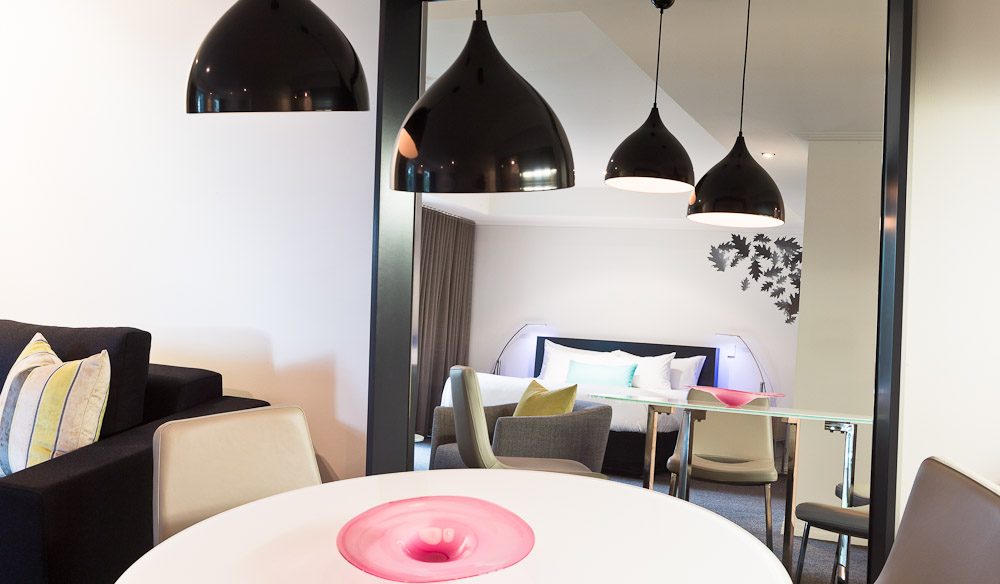 A standard room at the Como Melbourne.

But for all her blue blood, nothing can stop the march of time, and two decades, one GFC and the arrival of several flash new hotels down the road have been enough for The Como to require a touch of tender loving surgery. “The hotel opened in 1989 and appears to need a revamp,” wrote one journalist in 2010, “as there are signs of wear and tear, such as damaged bathroom tiles and a scratched tub”. Indeed. 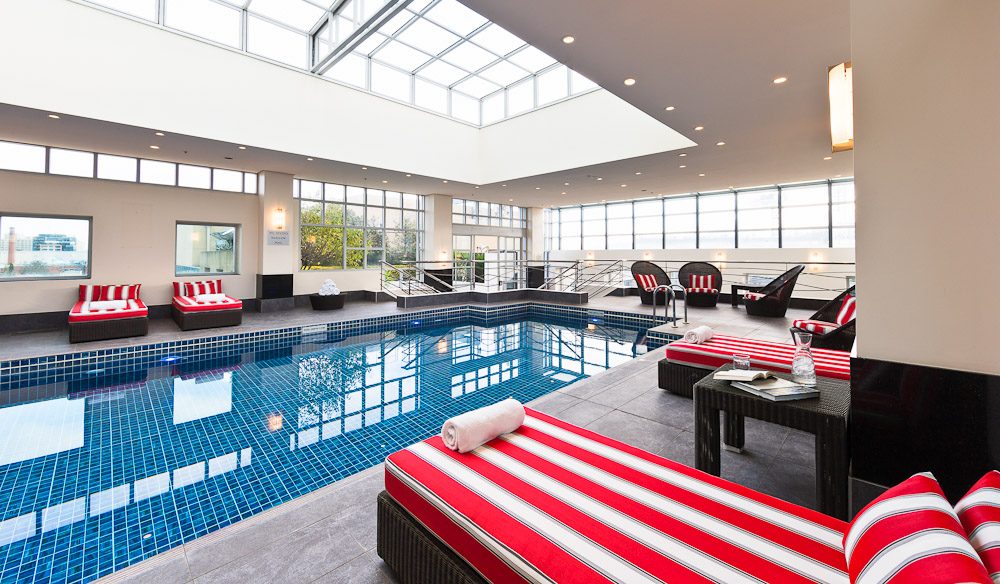 Pool at the Como Melbourne

But the tides of fortune have since changed at The Como, with new management (in the form of French hotelier juggernaut Accor) ordering a rebrand (the hotel is now known as The Como Melbourne – MGallery Collection), and pouring an undisclosed sum, somewhere in the millions, into her refurbishment. As a result, all 107 studios and suites now include wall murals, flash new beds, high-gloss kitchens, and the careful expert touches of Melbourne interior designers Elsie+Betty. So far, all signs point to good. 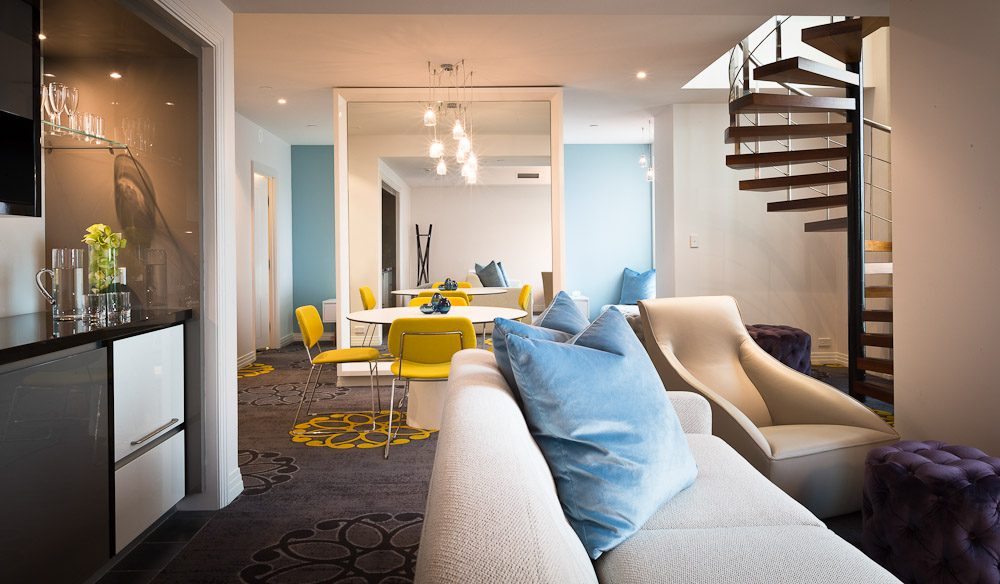 Gems Suite at the Como Melbourne

Walking through the foyer brings back no strong memories, either. Conservative cream has been replaced by an expanse of white leather and soft grey marble; various pops of magenta (a narrow rug here, a flower arrangement there) and a bowl of bright green apples make for refreshingly modern touches on what has unarguably always been good bone structure.

Indeed, hallways have always been wide, ceilings high, rooms generously sized and the bathrooms even more so. I am whisked to my lodgings with pleasant efficiency, receiving an upgrade from my modest studio to a fifth-floor open-plan suite in the process, and shown to a room that could house the loot of any Chapel Street assault. Aside from a questionable artwork on the wall (a grey motif of leaves, which would perhaps be more at home on the sale racks of a Swedish furniture store) the suite has been tastefully and thoughtfully put together, with sleek furnishings, descending feature lamps and more pops of colour – this time aqua and lime. The compact kitchen conceals a microwave and fridge behind glossy panels, while an enormous full-length double mirror leaves no part of a shopper’s reflection undisplayed. 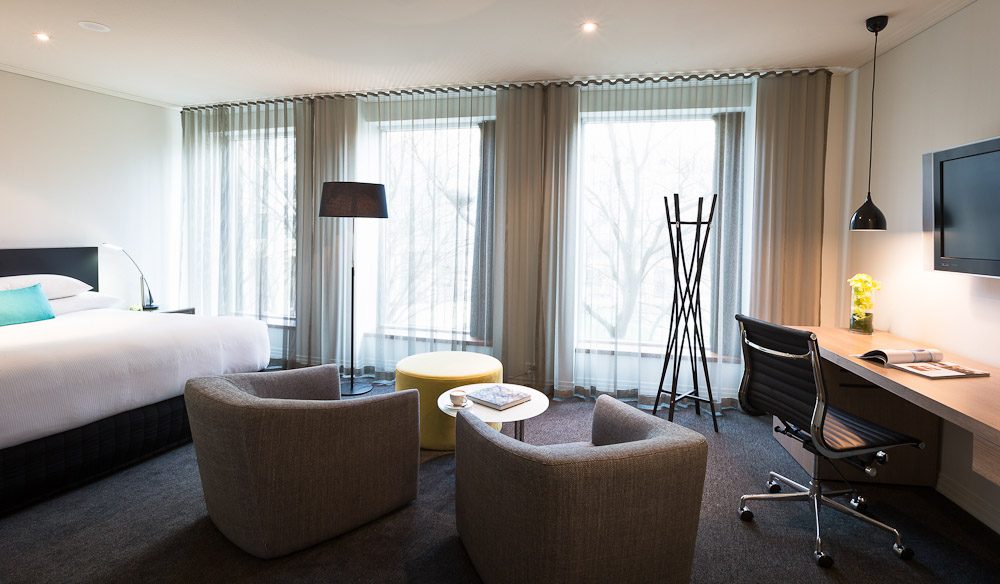 Interior of a standard room.

Evidently, this is a hotel that has housed more than one mother and daughter duo during their Chapel Street expeditions.

After a resoundingly deep nap, I scramble into the bathroom to begin the process of pre-dinner beautification, and discover the one place where wrinkles still show. Although the bathroom is large, with a double sink, separate shower and spa bath, and a swag of Morrissey toiletries, some of the fittings are an older style and the black marble hints at an era long past – when overalls were stylish and 90210 ruled the earth. And the rubber duck, a motif of which can be found on a $60 ‘traveller’s kit’ (toothpaste, deodorant, painkillers and so on), is nowhere else to be seen. (Although it will return soon, I’m later told.) 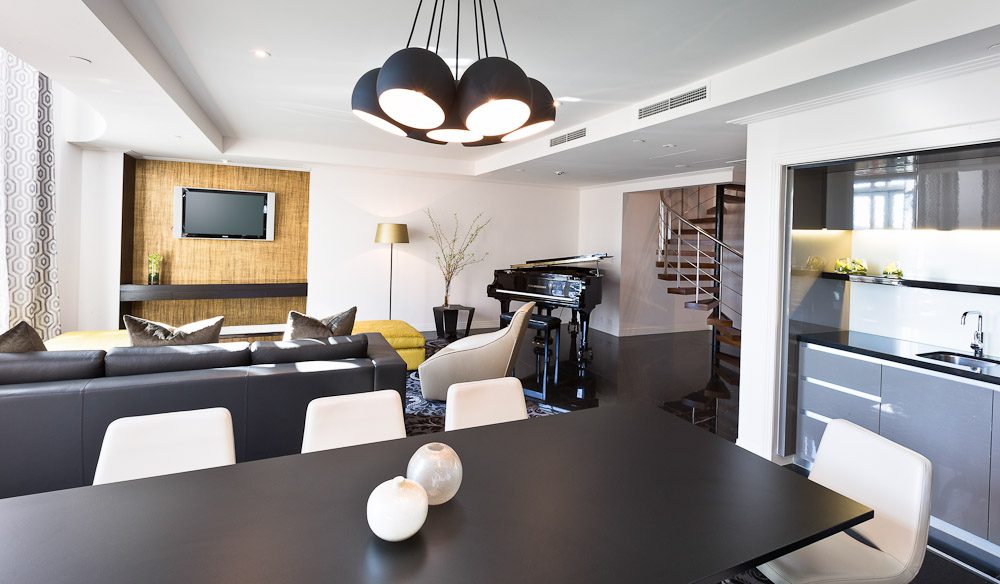 A Gold Suite at the Como Melbourne.

Later that night (actually it was some time early the next morning, I confess) room service delivers a serve of mushroom soup and fries. It’s unexceptional, like all food served at that hour, but promptly delivered and piping hot. And evidently it provides me with sufficient sustenance, for the following morning I find myself at the gym – which is, quite delightfully, not located in the basement. Rather, it’s part of a top-floor health area, which houses a sauna, spa and 25-metre pool complete with retractable roof. For when the ceiling gets in the way of your tan, of course.

Still, the Como isn’t really the spot to come for a sauna or sunshine – it’s a base camp, from which to explore the many fashionable surrounds of Melbourne. A rather nice, designer base camp. Come with your girlfriends for a latte long weekend, book in for an indulgent city escape, or retreat here after a long day’s shopping with mum. After all these years, she deserves it.

The verdict: Sleek, chic and fashionably located in the centre of South Yarra.

We rated: The sense of space makes everything that little bit more sumptuous.

We hated: The messy paint job in the bathroom.

Notes: AT paid $323 for a studio room on a weekend, but rates vary.