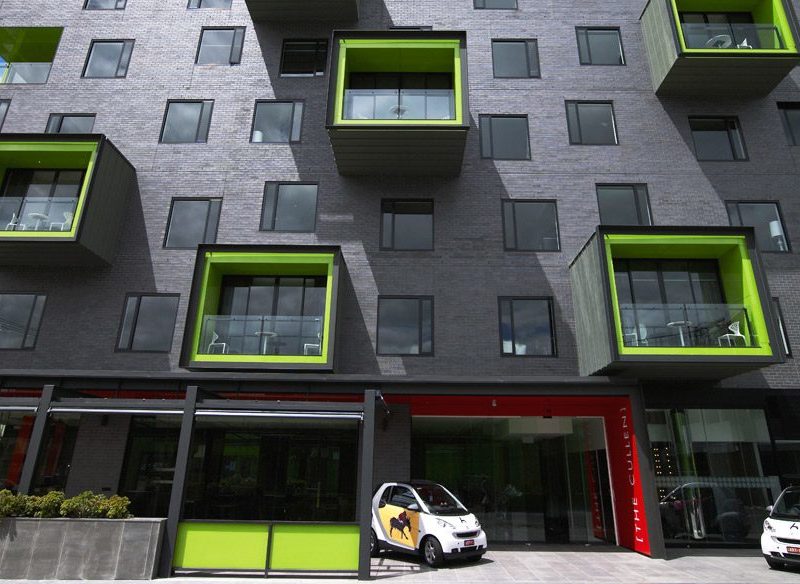 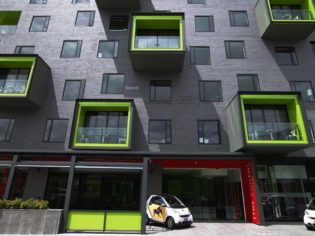 Melbourne’s latest boutique city weekender hotel, the Cullen, adds an arty twist to an already art-rich urban landscape. AT’s Nigel Herbert checked in – twice – to see if it can hold its own in Australia’s coolest city.

Just before Christmas, the intriguing 115-room Cullen hotel in Melbourne held its official launch. After being invited, I got to thinking about Christmas treats in general – and one Christmas gift in particular.

It’s the first in a new “Art Series” of hotels, with each one themed around the works of a particular artist – in this case Adam Cullen, winner of the Archibald prize in 2000. 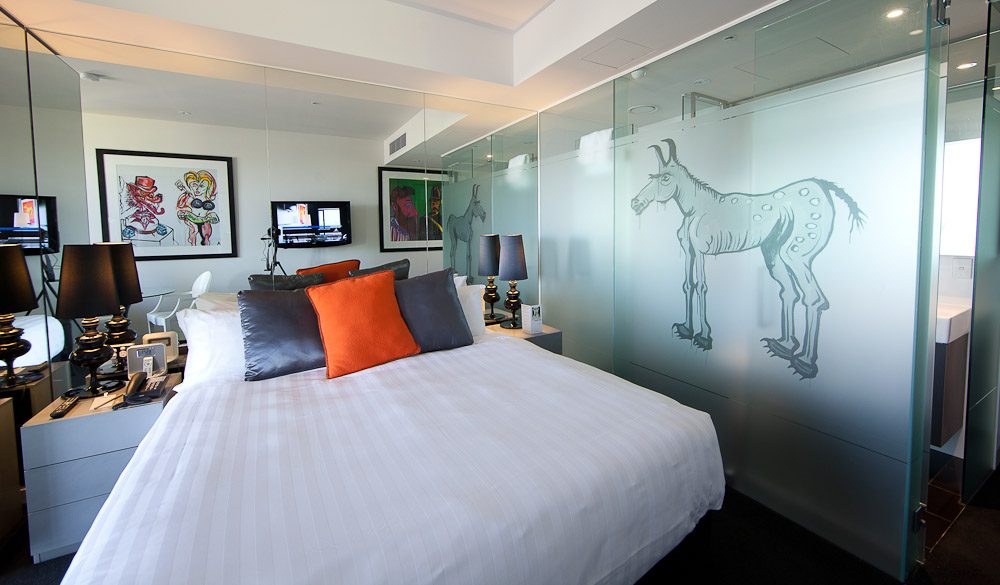 Interior of a standard room – The Cullen Hotel Melbourne

As a child, all I ever wanted was a Star Wars hand blaster. Trying to sleep the night before, knowing full well that the mysterious gun-shaped present under the tree was probably exactly what I thought it was, worked me up into a frenzy of excitement. But it would then proceed to go downhill. By the time Christmas lunch came around, the gun would be broken. Worn out. Never used again.

It’s similar with hotels. When a new one opens there’s usually massive fanfare and a launch. It’s all shiny and new, it smells of paint, but it takes a year of abuse and general running before you get a feel for what the hotel will really be like. So when we attended the launch of the Cullen in December 2009, it looked great. The rooms were new; the launch party was excellent. It’s the first in a new “Art Series” of hotels, with each one themed around the works of a particular artist – in this case Adam Cullen, winner of the Archibald prize in 2000. The hotel is a virtual gallery of his work, with 450 pieces throughout the hotel, including two cows in the foyer. It sounds strange but it does work. It gives it a point of difference, and as a guest you feel that this hotel is something unique. 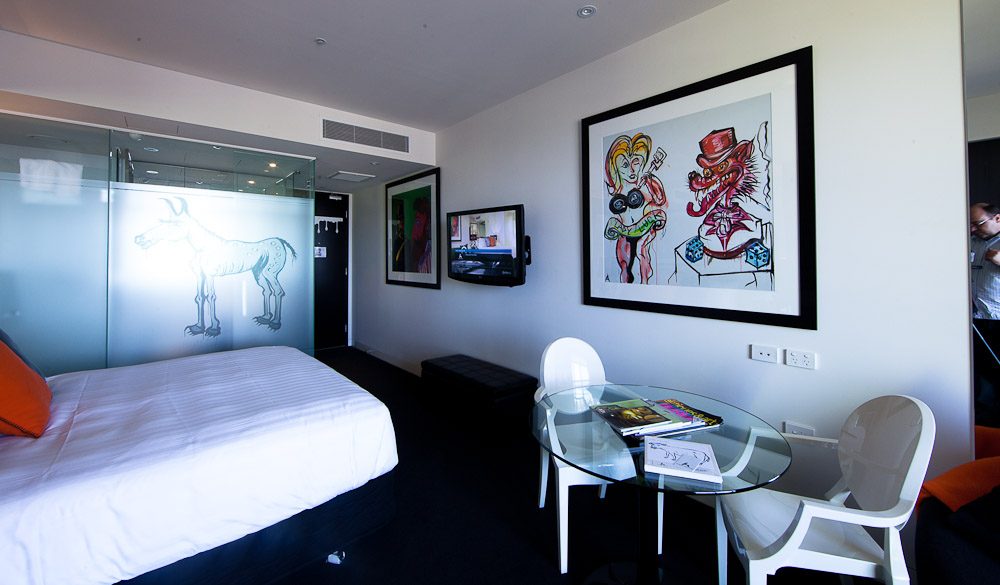 Interior of a standard room – The Cullen Hotel Melbourne

After the fanfare subsided, we returned in March 2010 to anonymously review the hotel for you, our humble readers. We paid $249 for a night in a studio room (all rooms are studios but some have balconies). Steep for Melbourne, but the Cullen website advertises the standard room rate as $549 – a preposterous amount that would make this hotel far too expensive. However, that rate is almost never used, and after monitoring it for three months, the real rate settled around the $250 mark. This makes it pricey for a boutique hotel and, with a huge supply of rooms coming onto the Melbourne market over the next 12 months, there will likely be downward rather than upward pressure on these rates.

On check-in we tried the “Can I please get an upgrade?” gambit, and while they didn’t give us a freebie, they did offer a studio with a balcony for an extra $60. So full marks there. Often hotels will try and gouge you at this point, but the Cullen, to their credit, just charged us the incremental amount on the best available rates online at that moment. 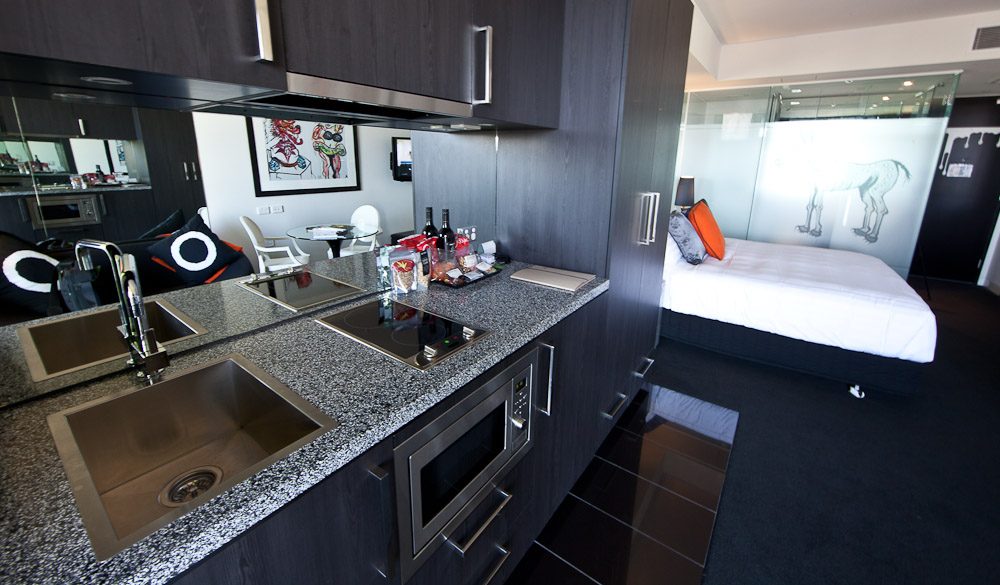 All rooms come with a small kitchenette

The rooms themselves are nice. Not lavish, nor über-trendy, with minimalist décor. Each room has a huge plasma TV, a table, sofa and, bewilderingly, a mini-kitchen that includes a cook top. We would have preferred to see some of this kitchen space used for another couch or a more generous living area; when you pay close to $300 a night, it’s unlikely you’re going to want to cook dinner in your room. If we want a kitchen, we’ll get a serviced apartment – which will likely come with a laundry, dining table and a couple of bedrooms for roughly the same cost.

If someone asks us for somewhere in Melbourne that’s great for a quick escape we would have no hesitation in recommending the Cullen. 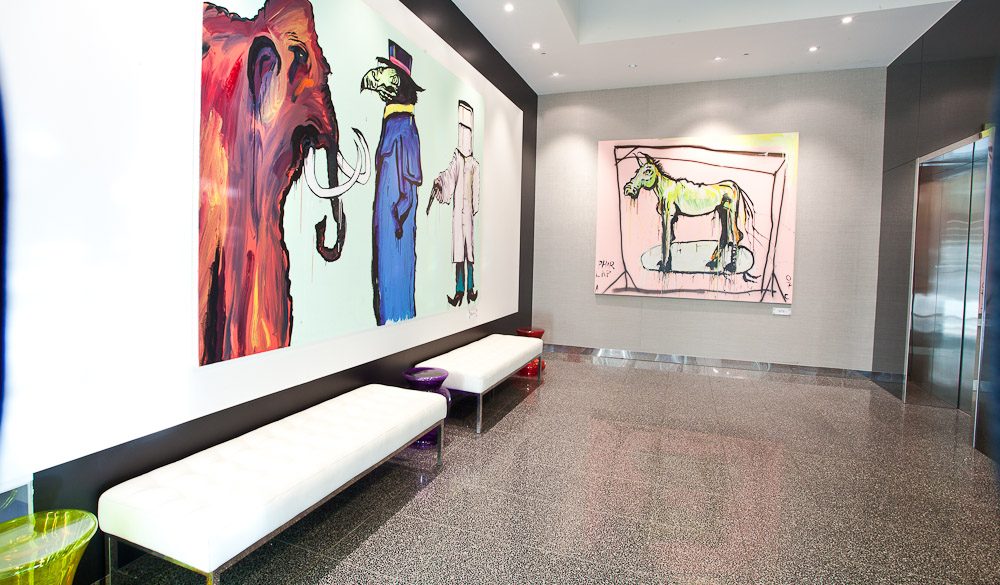 The Cullen doesn’t have room service, but there’s a downstairs restaurant/bar called Terrace Bar and Bistro that delivers for a surcharge. The food is Mediterranean-inspired, but not particularly noteworthy. It’s ideal for grabbing a coffee on the way out, but that’s as far as this recommendation can go.

Service was slow, and indifferent at best. 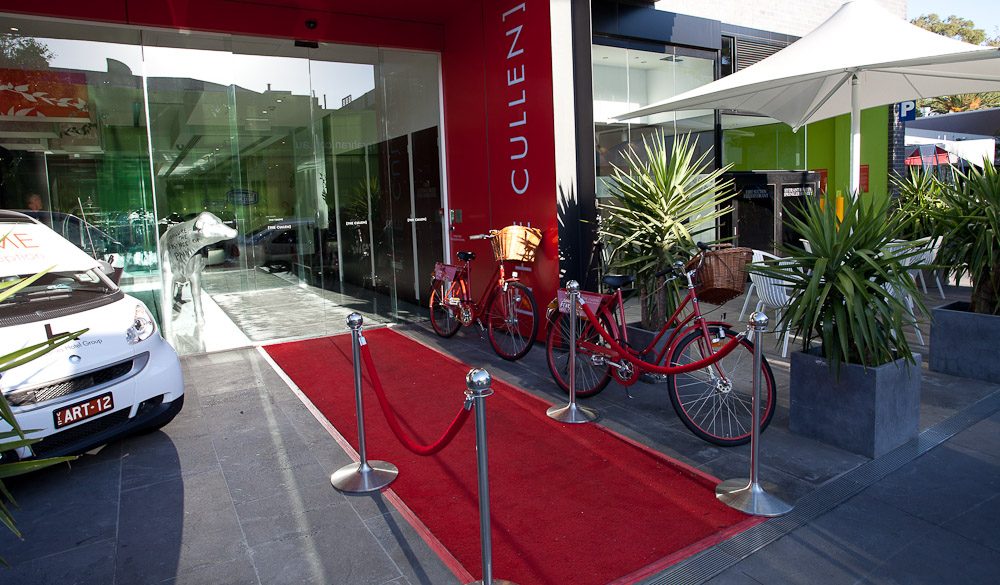 The exterior of the hotel. With bikes and cars available for guests to use.

The revelation and standout of the stay was the HuTong Dumpling Bar, which takes up a tenancy on the ground floor. Beautifully designed, with a wonderful feel and attentive staff, it was an absolute highlight – and that’s before you get to the food, which is brilliant. Perfectly produced dumplings, generous portions and reasonable prices considering the quality. This is one Chinese restaurant that’s going places, based on the full house of happy diners on a Tuesday evening.

Where the Cullen shines is as a city weekend away. An indulgence. If someone asks us for somewhere in Melbourne that’s great for a quick escape we would have no hesitation in recommending the Cullen or the Royce.

For the business traveller looking for a base for an extended period, it doesn’t cut it. It’s just too expensive, the business facilities too limited. But for a couple’s weekend – it’s quirky, bold and entertaining. I just hope it doesn’t end up like my Star Wars blaster: all worn out after 12 months.

Notes: Online rate from $249 for a studio room. AT paid an extra $60 for an upgrade to a balcony room.