The Merry Lives of Windsor 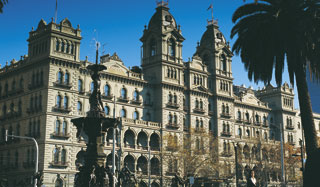 Peter Olszewski travels to Melbourne to see if the grand old Windsor Hotel is maintaining its grace and charm…or beginning to show its age.

Years ago I grew leery of refurbished and allegedly renovated ye grande olde hotels of yore, particularly after a string of unfortunate Indian experiences involving noisy pipes, dead mattresses, useless phones and crap food – especially the sad apologies identified on menus as mulligatawny soup. Such hotels tarted up entrances and foyers, decked out staff in daggy, frayed costumes and upped the tariffs while failing to deliver modern comfort and amenities. However, I’ve had occasion to revisit my attitude to refurbished old hotels after a delightful, although expensive, stay at The Strand, Rangoon’s legendary hotel.

Consequently, during a recent trip I decided to amuse myself by spending a night at the Hotel Windsor. This was a big call; when living in Melbourne I loathed this bloated palace of pretension. It personified everything I regarded as the stuffy, snobby downside of the city.

The hotel was opened in 1883 as The Grand. In the 1880s, Temperance party supremo James Munro bought it, burned its liquor license and renamed it The Grand Coffee Palace. In the 1920s the liquor license had been restored and the hotel was renamed The Windsor after a visit from the Duke of the same name. It’s at the top end of Bourke St, over the road from the Victorian Parliament House. For most of the Liberal Party-dominated 20th Century the hotel was government owned and, as such, a repository for the pin-striped Liberal ruling class, culled mostly from Melbourne’s superior suburbs or the wealthy grazing grounds of the western district. When parliament finished sitting, the Chosen Few ambled across Spring St to hole up in the Windsor’s tedious cricket bar where, during the ’70s, they feverishly plotted to defeat the barbaric introduction of the one-day game. They were soundly defeated. Their time at the trough was ending, leaving them lamenting a period when Britain ruled Raj.

The lowliness of one-day cricket came at the time of even greater sacrilege, a Labor Party that was in power. But worse was in store for the conservative denizens of the Windsor; in 1980 the hotel’s lease was taken over by an Indian company, Oberoi International. That empire was created by a former Punjabi clerk, Rai Bahadur Mohan Singh Oberoi, in 1934 and their purchase of the Windsor lease was considered a disgrace by the Melbourne old guard. The move was met with stern but futile opposition. The final blow came in August 1992 when the Victorian Labor premier John Cain sold the hotel to the company. It has since changed hands again, and from the beginning of 2006 now trades simply as the Hotel Windsor once more.

The Windsor is no longer really a grand hotel, nor a truly five star establishment for that matter, and I was surprised at the low room tariff I was able to secure. All the hotel has really got going for it in the marketing stakes is its curiosity, its nostalgia value and a superb location. And the fact (which isn’t marketed) that wheeling and dealing secures a mid-price stay. It was also obvious that the beautiful people no longer stayed here, and the interior is now fairly ordinary, with huge lumps of overly ornate colonial wooden furniture dotted here and there as a reminder of a grand past. Walking down the corridor to my room was a bit like strolling through an antique shop, interrupted by puce-coloured metallic lift doors that looked like a job lot from the YMCA. Opening the door to my room was a pleasant surprise; it was well kitted out with modern amenities, even connections for laptops with modems and, in keeping with ye olde hotels, it was huge. I considered calling room service for a pair of binoculars so I could actually view the TV from my favoured hotel viewing station (the bed), but I quickly canned that idea as it was obvious that the hotel’s extras were money traps: buffet breakfast $33 if not included in the tariff, use of internet in the foyer $10 per half hour, and so on.

Because breakfast was included I indulged, but found the Windsor’s fare sadly lacking: a not-exciting choice of food featuring watery and lumpy, almost-cold scrambled eggs.

A Windsor quaintness is that the hotel opens directly onto the street. There’s no driveway and nowhere to park while checking in, except in the loading zone at the entrance in busy Spring St. I was eventually told the hotel does have a car park area but not actually at the hotel; it’s in a commercial car park in a nearby side street. Although, as the receptionist quickly added, it is valet parking – which means you have to hang around until someone goes and gets your car and delivers it to the front door.

But the great feature of the Windsor is location, location, location. It’s slap bang in the middle of the city’s reinvigorated CBD and for the casual car-less visit it’s handy to everything and close to transport. The rooms are also well soundproofed. I stayed on the first floor in a room overlooking the busy Bourke St tram stop and in the morning I could just hear the faint and pleasant sound of a tram clanging outside, reminding me that I was in the heart of good old Melbourne town. Plus, I was chuffed that I’d found a good mid-priced hotel in the centre of the action. That’s the hotel’s current saving grace, despite the hefty tariffs posted on its website.