When Only the Second Best Will Do 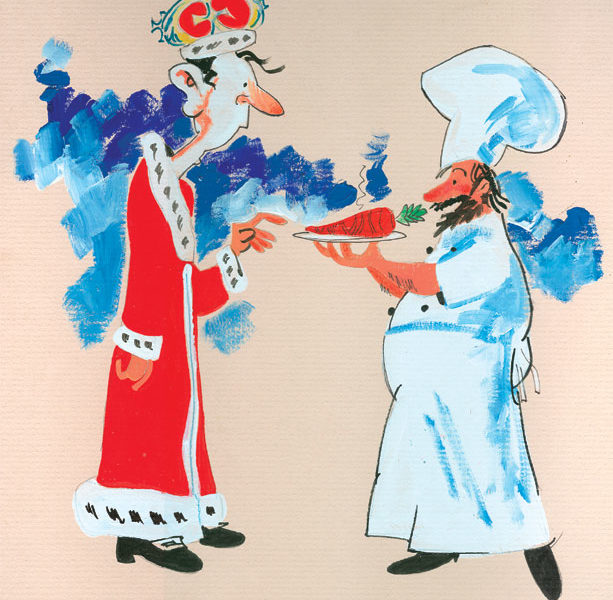 In the spirit of thrifty dining and shoestring travels, Peter Russell-Clarkehas served lone veggies to royalty, simple spuds to simpletons, and second-best fish to a second-rate show-off. All in the name of good taste.

Queenscliff pokes its nose out into the turbulent rip of Melbourne’s Port Phillip Bay’s Heads. The peninsula opposite is tipped by what was, until recently, a military camp, as well as Victoria’s Quarantine Station. The area is now a national park. And bordering that is Portsea, where the state’s silvertails live.

On the Queenscliff side, the Bellarine Peninsula is now becoming a trendy area too. But it wasn’t so long ago that the was the working man’s peninsula. The farms were worked by the blokes who owned them. The rainfall was, and is, about half that of the other side. And so is the income off the farms. I know, because I ran a sheep and cattle property overlooking Queenscliff. And I never made a worthwhile dollar from it. So I decided to open and operate a Gallery Restaurant in a corner of a paddock in which I grew a commercial grove of lemon trees.

I plodded my way through the bureaucracy of the council. That, dear reader, was like walking on a stairmaster – one of those infernal exercise machines with a revolving strip of rubber. You walk but never get anywhere. But my wife and I persevered and so, despite the council, we prevailed.

One day I was approached by a prestigious food group from Tasmania who asked me to cook for them. “We will supply all the ingredients,” they informed me. “We’ll even bring the water for you to cook with,” they smiled. “You see, absolutely everything must be sourced from Tassie.” It seemed to have escaped them that I wasn’t a Taswegian. Nevertheless, we proceeded to the day they arrived at my restaurant.

They were excited and understandably proud of their multitude of raw ingredients, one bag of which was potatoes. “They are a new and exquisite variety our clever folk have developed,” they crowed. “And this is our first tasting.”

And so the first thing I served them was one of their spuds boiled in the Tassie water. No butter. No salt. No nothing. Except a pretty little pomme de terre bravely sitting resplendent on a large, white plate before each guest.

They waited expectantly for some of their other foods to join the spud. Nothing did.

I was called forth, and explained that they should eat the potato without any other food to detract from its flavour. “You must know the true, unadulterated flavour so that you will then know what to marry it with.”

They ate the offering in silence. The rest of the food that followed wasn’t as dramatic or controversial.

A similar thing happened with one of the meals I cooked for Prince Charles. I served him a cooked carrot, alone on a plate. He looked at it with an expression that clearly said: “The blasted colonial has forgotten the chop and gravy.” So I explained that, prior to this, he no doubt ate his obligatory carrot with peas and parsnip and a serve of royal roast beef. “So, dear Prince, you lose the exceptional flavour of the carrot. I want you to learn to recognise that flavour, so that you know what to order with it. Great cuisine means food must taste just exactly like it is. You see, sir, I am here to excite your appetite, not admonish it.”

Next time, I served him carrot with honey and garlic as an entrée. “You see, Mister Prince, those flavours complement each other without any of them swamping the other.” We became firm food companions.

On another occasion, a swaggering young gent obviously set out to impress his fellow diners by calling for me, not for the menu.

“We’ll eat fish – fresh – with hollandaise sauce. Er, no, béarnaise sauce I think, and not too much tarragon. Now the fish – coral trout will do. No doubt you buy direct from the fishing boats at Queenscliff, so it must be fresh. Right?” he smirked at the girls at his table. “Knowing your food is what I believe separates a civilised and sophisticated fellow from a dolt, don’t you agree?” he asked me. I nodded. Then, as we were fully booked, I scurried back to the kitchen.

Now, hollandaise is made from egg yolks and butter. Béarnaise is a variation with slightly less yolks, tarragon vinegar instead of lemon juice, spring onions, chervil and white wine. Actually, it’s a classic sauce and served with fish, among other things. But I prefer a light soy with a little fish sauce and grated ginger. So, unlike French restaurants, which have hollandaise or béarnaise on hand, I don’t.

But I’d made an aioli sauce for another table of regulars. Aioli is simply mayonnaise with a heap of garlic juice stirred into it. So I picked fresh tarragon from the herb garden, mixed it with the aioli and served it over fillets of some marvellous eel-like rock ling, which the Queenscliff trawlers had caught between their home base and Tassie. Pink ling is caught in open water, while rock ling is found further inshore, in the shallows and around caves. Both fish have mild to medium flavours, but once a strong sauce covers them, you wouldn’t pick it from coral trout unless you knew your fish. And this gold-encrusted young swank most certainly did not.

“Best bloody meal I’ve had in a long time. Can’t beat coral trout, eh? And the béarnaise was superb. Just the right amount of tarragon, eh? Mustn’t overpower the flavour of the fish. God, you’re lucky being where you are. Trawlers at your doorstep. Can’t get fresher than that, eh?”

I didn’t tell him coral trout comes from Queensland, not Queenscliff. But then, if he’s given second best but believes it to be the best, good luck to him. Especially because he tipped.