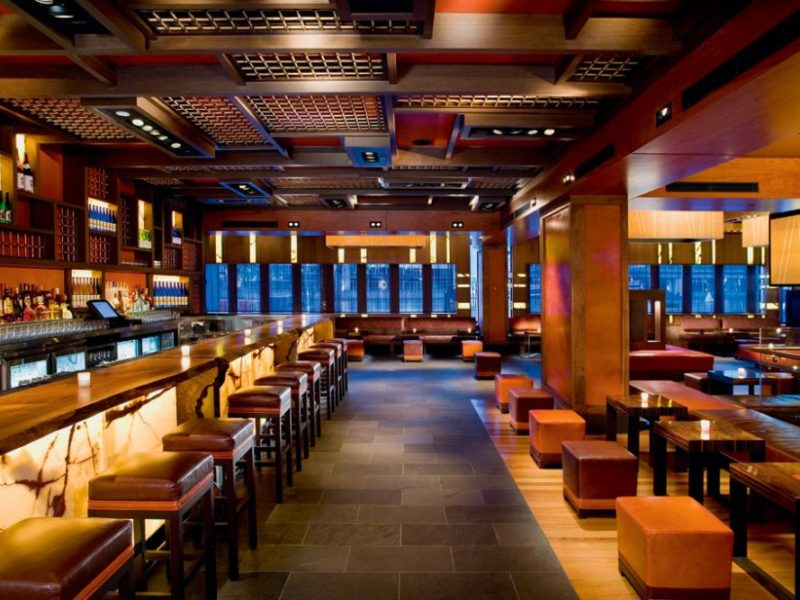 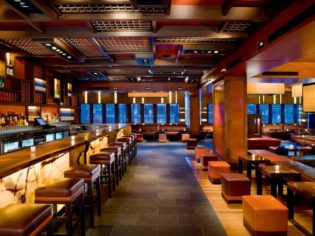 Check out one of the world’s most elite Japanese restaurants, Nobu in Melbourne, to determine how it fares against your average sushi joint.

You could take your tastebuds on a tour of Asia every day of the week in most capital cities. You don’t have to travel far to find delicious Korean barbecue, Chinese dumplings, Vietnamese pho, pad Thai, Indonesian nasi goreng, Malaysian Penang curry and, of course, sushi, the most popular choice for Aussies on cheap first dates and city workers taking their lunchbreak at their desks.

In Australia, Japanese food is fresh, easily accessible and affordable, so it’s with great interest that I head to Nobu, one of many fine-dining restaurants in Melbourne’s mega Crown Casino complex, to see if, after nearly five years in business, it can possibly offer anything more special than my favourite local Japanese restaurant, Tori Matsu, a casual Japanese dining experience at 179 King St, Melbourne.

I send my friends round the twist by extolling at any opportunity the delights of Tori Matsu’s California rolls, agedashi tofu and crab-cream croquettes – even their edamame seem the snappiest, saltiest peas in the pod in the world.

So yes, I am biased. I head to Nobu wondering just how a Japanese restaurant franchise that owes its success to Robert De Niro could possibly compete. Nobu is named after exectuve chef Nobu Matsuhisa, whose biography on the restaurant’s website is equal parts heartbreaking and uplifting. 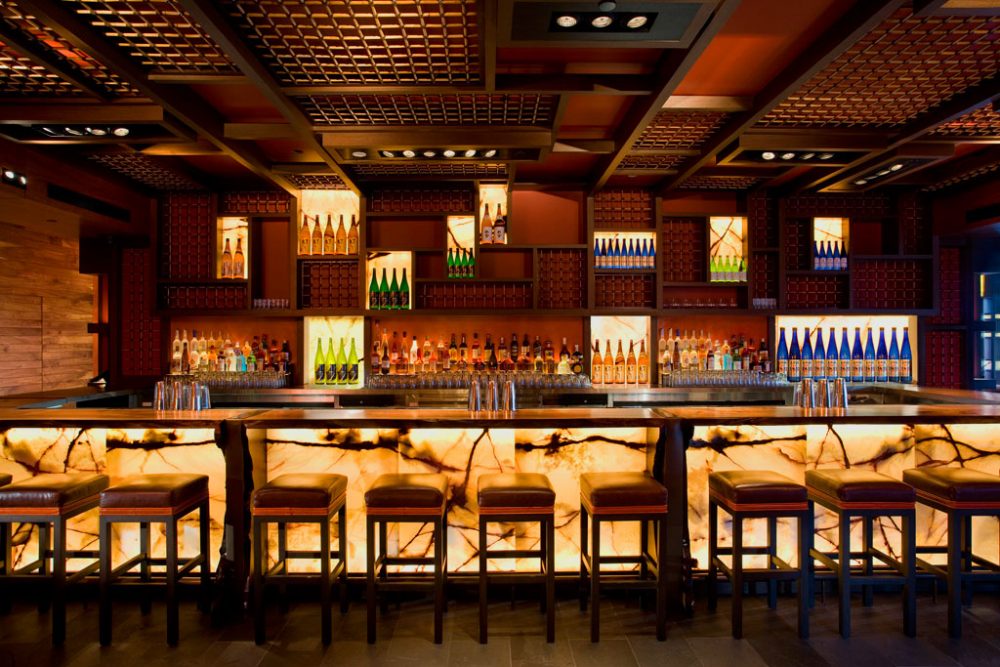 Allow me to annotate: he was born in Saitama, Japan, to a lumber-merchant father who died in a car accident when Nobu was a little boy. When he was 24, a wealthy customer at the sushi restaurant where he worked offered Nobu the chance to open his own sushi place in Lima, Peru. After the business relationship turned sour he worked in Buenos Aires before returning to Japan, only to be offered his own sushi place in Alaska.

When this restaurant burned down, he headed to Los Angeles and struggled for nine years to get out of debt, whereupon a besotted-by-sushi Robert De Niro convinced him to open in New York in 1994. The rest is history – he now has 25 restaurants in 21 countries, including Nobu Perth, which opened on September 5 this year at the Burswood Entertainment Complex. Seems gambling and sushi is a good mix.

The restaurants all share a common menu and interior styling – dim lighting, dark-wood furniture and burnt-red walls, which make a nice change from the low-rent Friday night rabble-rousing taking place in Crown Casino’s ‘common’ areas as I walk through them on my way to Nobu from the car park.

There are people everywhere, especially in the Crown food court, a bizarrely downmarket series of tuckshops just outside the entry to Crown Casino. The area is populated by drunk kids who may or may not be still in high school, who stand around in self-conscious clumps wearing patent leather high heels and brightly coloured backless tube dresses, waiting for their princes to come.

The contrast is quite extreme between this part of Crown and Riverside, where you’ll find luxury stores like Louis Vuitton and posh restaurants such as Silks and Spice Temple. 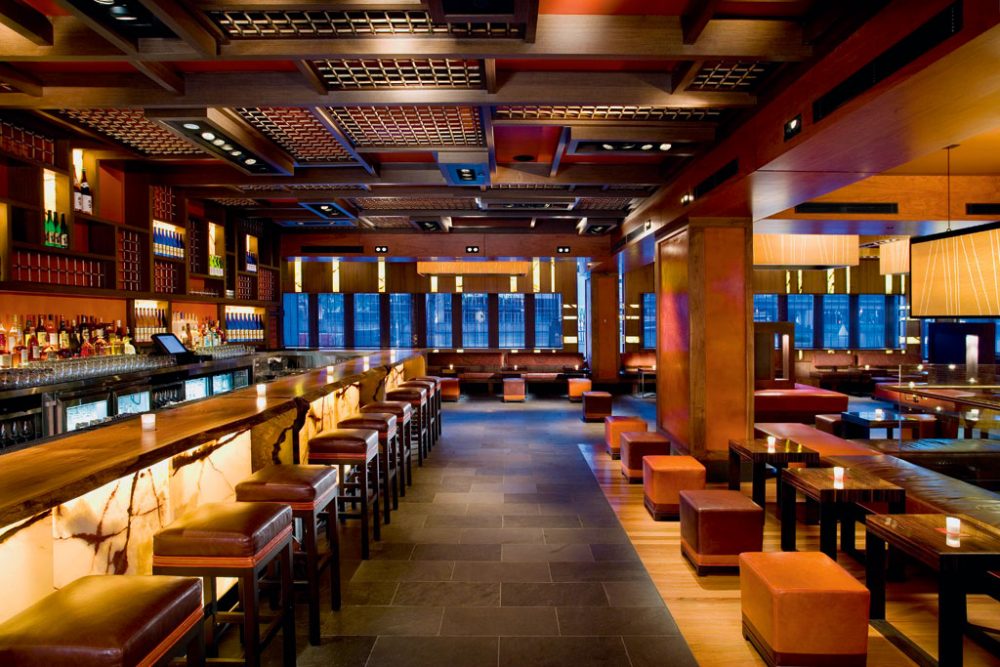 My dining companions and I haven’t made a reservation but the maitre d’ doesn’t mind, offering us a place at the impressively stocked upstairs bar until a table becomes free downstairs. At first we’re disappointed to be shown to a cramped space under the stairs,but as soon as we settle in we recognise the spot as one of the best in the restaurant.

Our table is tucked away on its own and affords a lot more privacy than the rest of the open-plan restaurant. We’re also near a window, which we think is great for people-watching until we witness a middle-aged woman “planking” on a banquette in front of Prada.

But to the food: we decide on dining in the omakase style, with a five-course chef’s choice tasting menu priced at $95 a head. There are three of us eating, and one is vegetarian, but the waiter happily tells us that this isn’t a problem – the kitchen will design a vegetarian degustation so he can dine along with us meat eaters.

It is a joy to watch our vego friend’s face as, course by course, he is treated to what he later describes as the most imaginative and delicious restaurant food he’s ever tasted. He almost squeals as he tastes a dish of eggplant with white sesame seeds and miso marmalade. 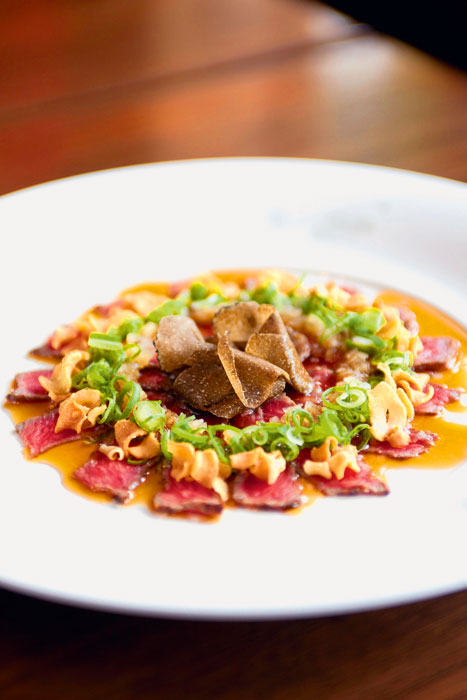 A salad of baby spinach with truffle oil and parmesan with lime dressing makes even us carnivores envious.

I came in tonight with quite a cynical head on my shoulders but the ambience and flavours have softened me up. The food is impeccably cooked and presented, and the waiter is clearly proud as he announces each dish and places it at the table. So he should be. Although the menu is formulaic – you can order the same meal in Moscow, Milan and Miami – it’s a delicious experience.

Our first three courses include a beautifully fresh whitefish ceviche, a salmon salad and a thoroughly enjoyable black cod dish, which has been marinated in miso for three days. A side dish of pickled ginger clears the palate for the next course – tenderloin toban yaki, which is steak cooked in clarified butter. Dessert comprises a bento box with a hot chocolate pudding and bitter green-tea ice-cream, which is delightfully rich but the clash of temperatures sends a shockwave through my teeth. I wonder if Sensodyne works.

If I have any complaint at all about dining here, it’s that I left feeling a little hungry, so next time I will fork out a bit extra and take the nine-course option. While Tori Matsu still comes up trumps with me for a midweek night out or casual Saturday night dinner, Nobu will now be my special-occasion restaurant.