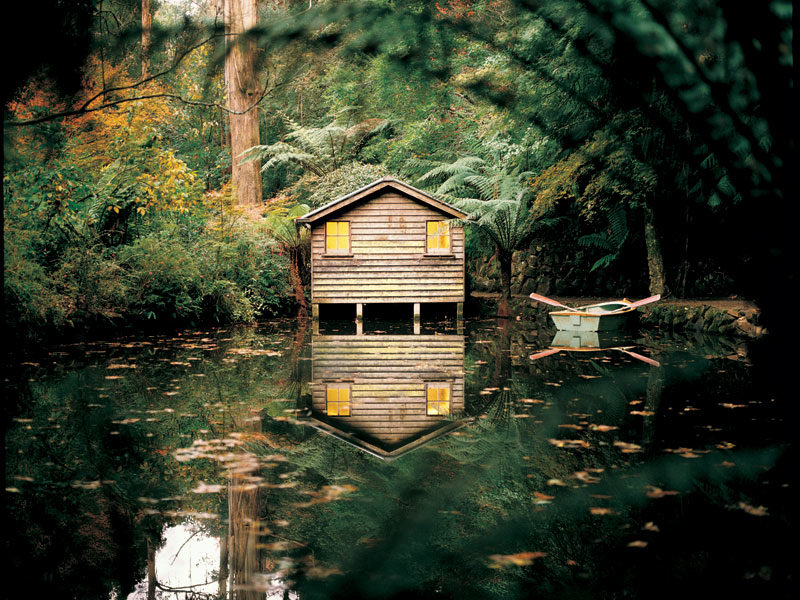 The best short breaks in Victoria when heading out from Melbourne.

1. Melbourne to the Yarra Valley

The Yarra Valley is one of Australia’s premium wine regions, producing an array of signature chardonnays, sparkling wines and cabernets. Just 115km (1.5hr drive) northeast of Melbourne, the opportunities to wander aimlessly among the vineyards – sipping, smelling and tasting – are virtually endless.

Make Yarra Glen, the heart of the Valley, your starting point and you’ll also get the chance to go for a hot air balloon ride and take a walk through the town’s antique and boutique stores.

Along the way // Eltham prides itself in having one of Victoria’s most successful annual Jazz and Blues Heritage Festival each year, so if you’re around on the Australia Day long weekend, be sure to stop by and join in the celebrations. Lilydale, the gateway to the Yarra, is where your wine tasting odyssey begins, before passing through the Dandenongs Ranges National Park, a great retreat destination for fresh air away from congested city life.

The Fern Tree Gully Picnic Ground is very cute, and the charming village of Olinda, the heart of the Dandenongs, holds a Spring Floral Festival each year at the National Rhododendron Gardens. If you’ve time to stray further south, the Sherbrooke Forest Park is some of the most tranquil country you’ll ever visit.

While popular for its internationally renowned wildlife sanctuary, Healesville can also be the perfect place to satisfy that hunger with some fancy pub-grub at the Healesville Hotel. And the ghostly, peaceful driving experience through the tall, slender galleries of Mountain Ash along the Black Spur Drive is unmissable.

Did you know? // Technically the closest ski field to Melbourne is in the Yarra Ranges National Park: it’s Mount Donna Buang, just north of Warburton, and at 1250m tall receives (just) enough snow each winter for a bit of a ski.

“The Prom”, just three hours southeast of Melbourne, is the most southerly point of mainland Australia, where you’ll uncover 50,000 hectares of national park renowned for its spectacular scenery. There are at least 30 walking tracks to explore – including the wheelchair friendly Loo-Ern trail. Watching the sunset from atop Mt Oberon will provide you with panoramic views of the surrounds, and you can rest your weary head at any of the four new wilderness retreats that let you camp in luxury.

Along the way // Take the Route 12 Culture Drive to Frankston, which gives you a unique heritage tour of the town, including a visit to the 1920s American colonial mansion of Mulberry Hill, a National Trust building. This leads you perfectly to a drive along the Mornington Peninsula where you can enjoy a glass of wine (or two) at one of the 50 cellar doors spread out en route.

Indulging a little too much provides an excuse to stay overnight at Mornington before heading out early the next day to the Cape Schanck Lighthouse for spectacular views of the sunrise. Grab a picnic basket and head to Western Port Marina in Hastings to enjoy a lunch with waterfront views, before driving through the dairying towns of Koo-wee-rup and Korumburra.

The guided tours down Wonthaggi’s State Coal Mines are on hold for now (thanks for the heads up from AT Reader Robert Butler from Inverloch) due to health and safety reasons and may be reopened in 2009 — but the fascinating above ground workings can still be examined, or you can  simply take advantage of the idea of doing nothing while at Waratah Bay.

Did you know? // One of AT’s favourite wineries – Ten Minutes By Tractor – makes its home along the Mornington Peninsula, and got its name from the fact that each of its three boutique vineyards is precisely ten minutes apart, by tractor. Clever, hey?

From Melbourne along the Great Ocean Road, Port Fairy is around 288km (3.5hrs drive) and is where visitors come to relax after dragging themselves away from the views of the 12 Apostles, closer to Port Campbell. Boat cruises from Port Fairy are very popular, either as part of a fishing tour or out to Lady Julia Percy Island for a picnic.

A scenic walk to the tip of Griffiths Island will take you to the Port Fairy lighthouse, and if you’re in town during March, you’ll be in time to catch the annual Port Fairy Folk Festival, a four-day party filled with plenty of jazz and blues by artists from around the world.

Along the way // The GOR has literally thousands of pretty stops along its 273km length. Torquay is now a beach-based mini-city. The sweeping coastal views from Teddy’s Lookout at Lorne never grow tiring. The sandy shores of Apollo Bay are great for a leg-stretch, as are the tiny artwork and antique shops along its main road. Along this same trail is Cape Otway, home to Australia’s oldest lighthouse, the Cape Otway Lightstation.

But to fulfil one of the main purposes of the GOR, you must stop by Port Campbell to see London Arch, Loch Ard Gorge and the 12 Apostles in all their glory. This entire area is certainly one of the great natural wonders of Australia, by land or from the air. Further west, don’t forget to tantalise your tastebuds in Warrnambool for a free tasting at Allansford Cheese World.

Did you know? // Apollo Bay’s popular annual music festival, usually held around Easter, has been running since 1993, and in fact a poster for the 1999 festival even made it onto an official Australia Post stamp.

4. Melbourne to The Grampians

Halls Gap is at the heart of The Grampians, Victoria’s rugged mountain ranges about 2.5hrs (255km) northwest of Melbourne. Aside from quality walks and terrific views, The Grampians National Park is known for the Aboriginal art sites scattered throughout, as well as several gorgeous, winding, scenic driving routes. The important and fascinating Brambuk Cultural Centre, complete with its own bush tucker cafe, is also a must-visit.

Along the way // Tours of Ballarat are wonderful, where you can retrace the steps of our gold mining history, check out the well maintained heritage buildings and visit the birthplace of Australian mateship along the Eureka Trail. Then perhaps a bit of rejuvenation is in order via a few spa treatments at Hepburn Springs near Daylesford, before leisurely walking through the historic town of Beaufort – the supposed birthplace, not of Australian mateship, but of Vegemite, which could well be just as important.

Stawell is just northeast of the Grampians, and is of course famous for its footrace – the Stawell Gift – which has been held every Easter Monday since 1878 (except for four consecutive years during WWII). Just southwest of Stawell, along the road to Pomonal, is the interesting Bunjil’s Shelter, an ancient cave containing examples of rock art depicting the Aboriginal spirit figure, Bunjil, a creator god represented by an eagle.

Did you know? // The first man to win the prestigious Stawell Gift from scratch (ie, without a handicapped head start) and only the third man in history to win it more than once, was Indigenous Australian Joshua Ross. He won it in 2003, and again in 2005.

Known affectionately as Australia’s paddle steamer capital, Echuca fulfils all those wonderful dreams of drifting along and fishing – or even sleeping the night on – the mighty Murray River. Around 218km north of Melbourne (2.5hr drive), Echuca is the closest point on the Murray to the Victorian capital, and is also home to one of Australia’s largest car museums, housing more than 40 restored Holdens at the National Holden Museum.

If you’re a lover of beer then you’ll definitely want to make a trip to The Great Aussie Beer Shed, a unique museum showcasing more than 16,000 cans of beer from around the world. So, to recap: that’s beer, Holdens and fishing from a houseboat. Road trip for the boys, anyone?

Along the way // Head northwest of Melbourne and into the Macedon Ranges to begin your journey with a visit to Woodend, famous for its unusual volcanic rock formation (better known as the perpetually spooky Hanging Rock). Then set course for a rich streak of old gold mining towns, chief of which are history-filled Castlemaine with its superb Art Gallery and the thriving mini-metropolis of Bendigo. Be sure to drop by Heathcote, which is punching well above its weight in the wine stakes and makes a fine alternative to the Yarra Valley.

If you’re a cycling fan, pedal your way to the museum to that eternal Malvern Star, Sir Hubert Opperman, on Moore St in tiny Rochester, just south of Echuca. The beautifully restored circa 1912 Shamrock Hotel is on the same street.

Did you know? // Echuca is named for an Aboriginal word meaning “meeting of the waters”, and in 1870 it was Australia’s largest inland port.