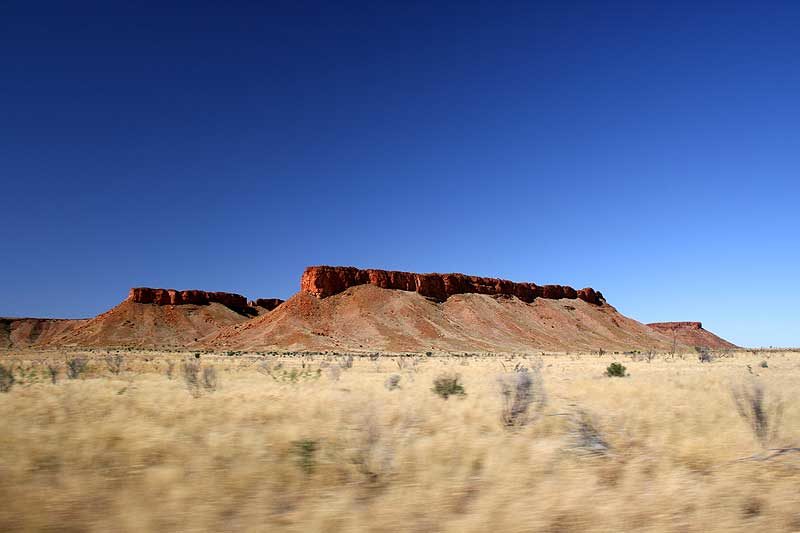 We had to include at least one journey for the truly hardcore, masochistic explorers out there. With the sun beating down mercilessly on more than 900 mesmerising dunes, this iconic outback trail has been described as one of the longest, most impracticable and remote in the world. And you really shouldn’t even think about attempting the CSR unless you’re an experienced off-road campaigner. As outback touring company ExploreOz so aptly puts it: “Drive the Canning Stock Route – the best way to beat up your 4WD.”

So, if you’re prepared to face mostly sand and bulldust for 2000km, start planning. Parks permits, fuel drops, food and water supplies, a convoy of well-equipped 4WDs and experienced and entertaining travelling companions are all top of the list for this adventure of a lifetime. And we guarantee you’ll be surprised at all the shades water can come in: swamps, billabongs, creeks, salt lakes and, of course, the famous wells – some reduced to slimy green holes, others resembling crystal-clear oases. Spare a thought for Alfred Wernam Canning and his 484-strong entourage of men, horses, camels and (mostly) goats who sank the original 52 wells every 15 miles (a day’s march for cattle) over a century ago.

This track from Wiluna to Halls Creek through the Gibson and Great and Little Sandy Deserts gives you a very real sensation of how inhospitable and alien the red continent must have felt to early European explorers. Which makes it all the more incredible to think Indigenous Australians have been living in this barren wilderness for so many millennia.

Starting in Wiluna’s gold mining and cattle station region, you’ll quickly leave picturesque and fertile pastoral country behind – as well as all vestiges of civilisation for that matter. (Although “quickly” might not actually be the right word, considering you won’t average much more than 40km/h throughout your journey.)

The first 700km will get you used to the solitude of WA’s outback; between Well 10 and 23, expect challenging sand ridges, endless salt lakes, stunning rock art at the Calvert Ranges, views from Canning’s Cairn and the first leg’s most popular camping spot at Durba Gorge – with tall, shady gums and green grass. Although there can sometimes be several groups of people making camp here, so if you like solitude there are nicer places to pause and enjoy the desert.

Next you’ll cross the Tropic of Capricorn before hitting the Talawana Track, where your first fuel drop can be arranged (this isn’t somewhere you want your car run out of juice all of a sudden). The thriving Kunawarritji Community is near Well 33 – fresh fruit and icy poles have never tasted this good – and there are camping and shower facilities for the weary traveller to wash off all that red dust.

Michael Tobin met his death on the end of a spear during the main stock route survey in 1907 near Well 40; the marble cross of his grave is still clearly visible. But before you get there, camp near the “haunted” Well 37. Canning called the adjoining stand of Casuarinas the Great Oak Forest.

Past the peaks of the Southesk Tablelands, the dunes of Breaden Hills and the rock art of Breaden Pool, the going gets a little easier as the countryside flattens out. Camping is permitted at the Mulan Community and Balgo just after Lake Gregory, where you can also stock up on fuel and limited supplies before hitting the Tanami Track, Billiluna Community and the Great Northern Road at Koongie Park.

Halls Creek offers quite a lot of excitement after the endless buzzing of flies and the droning of your car’s engine. If you’re weary and in need of a good night’s sleep by now, Halls Creek offers you a couple of lodging options, but while you’re passing through, check out the nearby China Wall, which looks remarkably like a section of the greater manmade version. There are also several natural pools around town, with Caroline Pool one of the most popular.

Refreshed and ready to go home? Welcome back to civilisation.

Who got there first? // Many Indigenous wells still exist near the CSR to this day and Alfred Wernam Canning relied on their knowledge of the area to sink his wells from 1906-’10.

Don’t miss // At Well 4a, walk about 200m west to find a welcoming lake invisible from the track. Most people simply drive by, but it’s well worth the walk.

Drive time // Total length 1781km, three to four weeks are recommended, and while you could theoretically master the route in less time, remember: the journey is the destination.

Dos + Don’ts
1. Prepare thoroughly and leave your itinerary with police. Lack of prep can have catastrophic consequences on the CSR. Deaths can (and do) occur.

2. Call ahead before entering Aboriginal communities.

4. Don’t attempt to drive on any of the salt lakes. It’s highly dangerous and the bogged-down-in-salt-crust look is a bad one.

5. Don’t think your brain’s playing sun-baked tricks on you when you come across the phone box in the middle of nowhere at Well 33 – it only works occasionally, and only for reverse charge calls.

Accessibility // 4WD only. Think lots and lots of red dirt. Check ahead on road conditions as some parts can become inaccessible. And organise your permit. (www.anfwdc.asn.au) May to August is a good time to go.

Did you know? // In 2002, German tourist Kim Hardt got stuck in a salt pan for five days in 50-degree heat with only one litre of water, some biscuits and an excellent supply of beer. Apparently, he thought the drive would take about three days.

Sidetracks // The Canning Stock Route
1. Rudall River NP // One of the biggest national parks in the world, sprinkled with sand dunes. If you’d like some diversity, go in winter and watch the desert transform into a carpet of wildflowers.

2. Lake Disappointment // If you’re disappointed with the CSR, check out the salt lake with that name (so called because explorer Frank Hann was hoping it would contain fresh water), which is bigger than the ACT.

3. The Gunbarrel Highway // is another isolated desert track, but it’s only a measly 1400km in comparison. If you’re ambitious (or just plain crazy), do this as a loop linking the CSR back to the Tanami Track, then back to Halls Creek.

5. The Tanami Track // is a shortcut from the Red Centre to the Kimberleys and a major service route for nearby gold mines.