Is this Australia’s loneliest lunch? 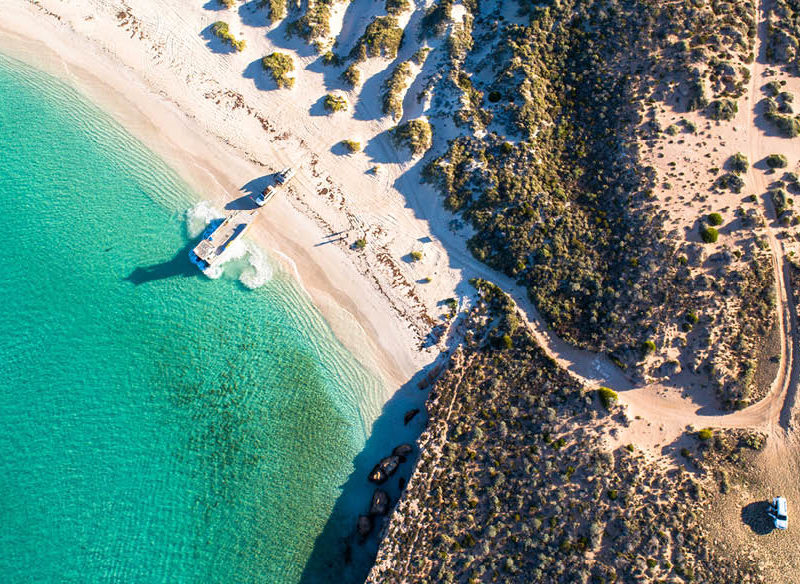 Throwing a long table lunch is easy, right? Roll out some table settings, bunch up a few native flowers and slap up a meal. Unless you live on a remote island off Western Australia’s mid-point, nine hours drive north of Perth, with no neighbours. Oh, and you’ve got 60 people coming.

Lunch on Dirk Hartog Island takes pop up dining to a whole other level. The setting, in World Heritage Listed Shark Bay, is a finger of land lapped by water so clear and so blue it’s like purified ice. The chef, with TV credentials, is flying in from Perth and the produce couldn’t be fresher: pristine seafood hooked for the occasion and native bush herbs foraged by a local Aboriginal man, who’ll probably chip a few oysters off the rocks for good measure. Idyllic? You betcha. But in keeping with the isolated location, there’s more to this romantic scene than you might expect.

Solar panels and wind turbines are the sole means of power on Dirk Hartog Island, while windmills and a desalinator supply water needs. So when Kieran and Tory Wardle hold their inaugural long table lunch this August – the highlight of a week-long foodie escape that runs from the 6th to the 12th –  some foresight is required. “Just little things like bringing over tables and chairs for 60 people on the front lawn – it’s not as though we have that many chairs on Dirk Hartog Island,” laughs Kieran, who moved to the island – now a national park – when he was 18 years old. In total, 400kg of freight and several tonnes of fuel will be put on the Wardle’s barge and ferried across to the outpost. And the food? That’s a whole other story.

On the menu: far flung food

Little comes easily in a place this remote – except fresh seafood. Kieran’s worded up his professional fishing mates, and will be throwing out a line himself so chef Russell Blaikie can dish up Shark Bay’s best. Blaikie, host of NineLIVE’s Delish and owner of Perth’s raucous Must Winebar, says he’ll be prepared for whatever presents itself. “I’ll pack some stuff to cure and pickle fish if I want to; if we catch squid I’ll do squid sashimi. If we catch a tuna, I might run it over the flame, dunk it ice water and serve it with seaweed and ice.” The rig for a fire licked paella is being constructed on site; goat for a slow braise will be supplied by a Gascoyne station; fruit and vegetables will come from nearby Carnarvon, the food bowl of the Gascoyne food region. Everything traverses the ocean. “The challenges are also the benefits,” says Blaikie. “Getting the ingredients there and working out what to cook – that to me is the experience of Dirk Hartog Island.”

Chef Russell Blaikie is so taken by the island’s rugged beauty, he volunteers his services for free. “It’s breathtaking, it’s wild and it’s getting back to its original state, since they removed all the stock from the island,” he says. “You’ve got the combination of two worlds: on the west side it’s rugged with 200m cliffs, massive waves and blow holes. On the east side, it’s calm and secluded, beautiful and serene.” The Wardles compare the island’s remote adventuring to the Fraser Island experience. Blaikie reckons it can’t be beaten. “I say to people: ‘put it on a bucket list because you won’t regret it’.”

Seems like a long way to go for lunch…

The long table lunch is part of the first Gourmet Island Escape, a three or six day foodie adventure that blends epic eating with guided 4WD adventures, marine sanctuary whale and dolphin spotting and cliff-top sunset drinks. It grants a window into one family’s existence on a remote stretch of Australian coastline few have laid eyes on. It’s also a satellite event of the Gascoyne Food Festival, where plenty more produce parties will be going on.

I want to go to there!

Dirk Hartog Island is a nine-hour drive north of Perth, or two-hour flight. From Denham airport, either tee up a scenic light aircraft flight to the Wardle’s homestead, hire a 4WD and join the self-drivers to Steep Point to meet Kieran’s barge, or book a spot on a daytrip to the island.