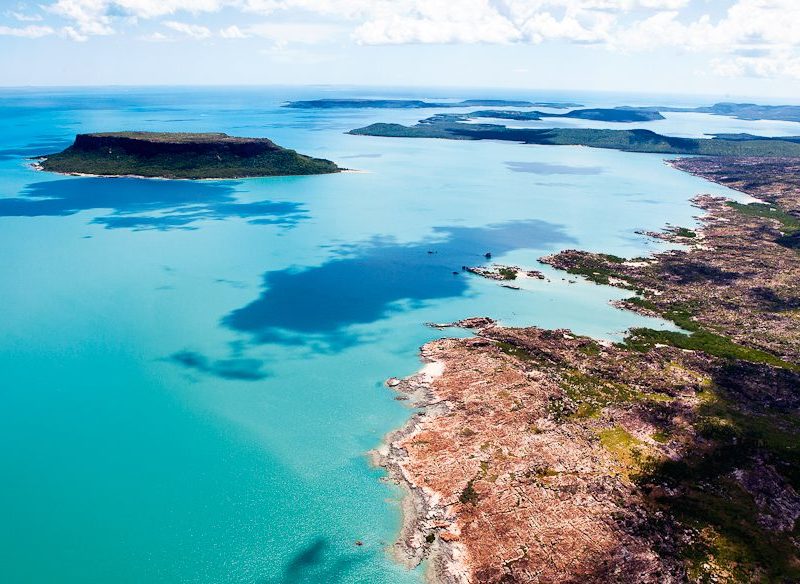 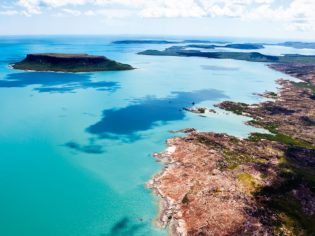 A vast tract of land in the northern Kimberley has been returned to its traditional custodians – bringing an incredible new travel experience to its jaw-dropping shores at The Kimberley Coastal Camp. Words by Alissa Jenkins

Cool blobs of ochre paint are dotted around my eyes. Albert Peurmora, a traditional owner of this land, has put them there.

He thumbs the same decorative markings his ancestors wore to signify ceremony, for thousands of years before us, before each member of the group is brushed with a gumtree branch in a traditional smoking ceremony to cleanse us of any bad spirits hanging around. We’re almost ready to enter.

He wanders through a small opening into a cave, and our group of 10 falls silent as we strain to hear the faint murmurs from inside. He’s speaking with the spirits of his land, warning them of our arrival and that we mean no harm.

This is the first time Kimberley Coastal Camp has hosted an experience like this. Traditionally a fishing retreat on the shores of the Timor Sea in WA’s far north, over 700 kilometres north of Broome, the camp is charting new territory with the introduction of cultural tours.

“The Kimberley is such a rich area in terms of indigenous culture and, because we’re so isolated here, the sites are so well protected and preserved,” says Kimberley Coastal Camp (KCC) sales and marketing manager, Ebony Muirson.

She’s hardly exaggerating. The camp is so isolated, it’s inaccessible by car. In fact, the ‘easiest’ way to get here is on board a light aircraft from Kununurra, over a mosaic of mangrove-lined creeks to Mitchell Plateau, followed by a helicopter flight that lands directly on the camp doorstep.

Situated on a headland overlooking vibrant turquoise waters, the land KCC sits on was only returned to its traditional custodians, the Wunambal people, in 2012.

While still leased through the WA government, the land’s traditional custodians are now recognised as its rightful owners, and KCC works closely with them in terms of how the land is cared for, and which sites can and cannot be accessed. It’s a momentous move, which has sparked the introduction of these cultural tours.

As we quietly make our way into the sacred cave, a member of the group gives a muffled gasp. The cave’s entire ceiling is embellished with ancient rock art.

Albert points out a large painting of Wandjina, the water spirit responsible for making rain, and Unguu the rainbow serpent, who slithered through the country to create the waterways that exist today. Surrounding these are hundreds of small circles, which indicate the abundance of nearby food, such as yams and stingrays.

“We don’t know how old these paintings are; some say they’re over 4000 years old,” he quietly hums over a cup of tea in the cave. “But we don’t focus on that. What’s important is the meaning, you know?”

We are sitting on extraordinarily smooth, glossy boulders, so formed “from so many sitting bums over thousands of years”, Ebony says. The floor, meanwhile, is covered in a layer of starched pippy shells left by traditional clans who came to this cave to feast on shellfish gathered from nearby waterways. Facing the enormity of this other previous existence is not easy.

As we try to take it all in, Albert finds a rock away from the group, where he silently sits and absorbs the experience. It’s a deeply spiritual place for him, where he connects with his ancestors and his culture, which in other parts has been lost or forgotten.

The rest of the afternoon is spent walking through long feathery grasses and over boulders, white-washed due to high levels of calcium in them, to other secretive rock art sites, only accessible to those of us lucky enough to be here at KCC.

Back at camp, as the west coast sun begins her multi-coloured finale, sinking behind silhouetted boab trees, I take a dip in the swimming pool before garlicky aromas entice me to the campfire.

The food here is surprisingly high-end for such a remote location – think home-style cooking at its finest – but the most memorable part of each evening takes place in tandem with our meal. As the camp fire glows each night, a resident olive python slithers in and coils up on a bench above the bin (harmless, so long as I don’t touch him apparently – a theory I don’t want to test), waiting for the local quolls.

In an extreme game of chicken, these little creatures – plucky tackers, they are – take their chances raiding the bin, darting in and out from underneath the python in a dance that, let’s just say, doesn’t always end in their favour.

They’re not the only regulars. A timid dingo (affectionately known to staff at Foxy), occasionally trots past when the group is quiet, and two sea eagles swoop a rock podium at midday every day, in the hope of snapping up lunchtime crumbs.

For all the wildlife, crushed-shell floors and ensuite-less accommodation, however, KCC is one sophisticated stay. The grounds, always neatly raked, play host to six lodgings with beach-front views and king-sized beds, while shared bathrooms (built around a small cave, no less), are a generous resource of fluffy folded towels and sumptuous amenities.

The careful balance between rustic but comfortable, accessible but chic extends further to ‘The Shed’ – a large open lodge, built from recycled materials (timber Telecom poles, remember those?) that houses the kitchen, dining table and lounge area, where crocodile skulls and fishing rods sit alongside colourful cushions, vases of fresh flowers and stacks of books and magazines.

However it’s the rock art that really gets the dinner table humming – more specifically, the Gwion Gwion artworks (also known as Bradshaw paintings). As detailed depictions of people, the Gwion Gwions can be found tucked under boulders, on rock walls and in all kinds of inconspicuous places across the north-west Kimberley, but nowhere else in Australia.

Unlike other ancient paintings, these figures are unusually meticulous, with tassels and sashes, arm bands and decorative headdresses (“the bigger the headdress, the bigger the boss,” says Albert) – and no one quite knows who created them.

While the Wunambal claim the Gwion Gwions are the handiwork of their ancestors, some archaeologists claim that an Indonesian population island-hopped to the region thousands of years ago before either returning home or dying out. As Ebony explains, some of the paintings are considered to be up to 28,000 years old, which means they’ve been around for so long that the globe has physically altered since they were painted – continents have shifted, islands have moved, sea levels have risen.

The Kimberley Coastal Camp, with the iconic boabs, takes in another laid-back dusk

For instance, at one beachside art site (which takes some gymnastic abilities to reach), when the Gwion Gwions were originally painted the sea would have been so far in the distance it would have been barely visible. Waves now lap the shore less than 50 metres away.

But for all the changes the world has seen since these figures were first painted, for all the revolutions, the wars, the fads and the technological advancements, there is something deeply humbling about the fact that this precious slice of history still remains.

“The KCC experience isn’t about the lodgings or even the activities,” says Ebony. “It’s about the feeling you get here – the solitude, and inspiration, to really look within. That’s what people come back for.” Given three out of four guests are repeat visitors – what a feeling it is. Face paint and all.

Getting there
Getting to KCC is an experience in itself. The most popular way is to fly by light aircraft from Kununurra to Mitchell Plateau, then get a helicopter transfer to the camp. Float planes can also be arranged for guests, with an impressive water landing.

For those with a vehicle or campervan, you can drive along the renowned Gibb River Road and up Kalumburu Road to the Mitchell Plateau airstrip and then helicopter the rest of the way. Or for the time poor (and thick-walleted), private aircrafts from Victoria or NSW can also be arranged with Kirkhope Aviation.

Each KCC experience can be tailored to your interests. Be it fishing, rock art, hiking or lying by the pool and sipping G&Ts – there is not a one-size-fits-all itinerary.

KCC packages include your return airfares from Kununurra, all tours and activities, accommodation, meals, snacks and non-alcoholic beverages (you’ll need to pre-order booze) from $4011 per person. The camp operates from mid-March to mid-October, to make the most of the dry season.

The Australian Traveller guide to The Kimberley

How to do the Gibb River Road – 4WD, hotel-hop, tour, cycle

You can travel along Kimberley's amazing outback Gibb River Road in the several different ways – and not all of them involve driving: 1. BYO Bedroo...

Everything you need to know about cruising the spectacular waters of The Kimberley: price, star rating, which port to jump on board and just how much ...

Cruising the Kimberley coastline: THE most spectacular Australian holiday?

Uluru, the Great Barrier Reef, the Big Lap: forget them all. In our last magazine issue, 20 of Australia’s leading travel experts named this little-...