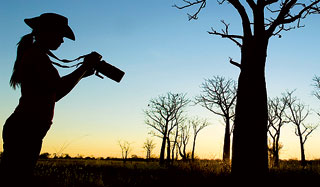 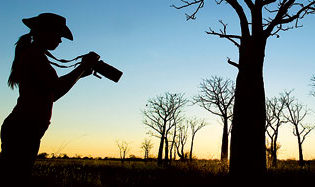 Australian Traveller reader Anne Bolch hops a barge from the Kimberley coast to a sleeping Darwin, arriving very much the worse for wear.
This story begins in Wyndham in the east Kimberley, the land where five rivers and many crocodiles meet. Most people, if they get to Wyndham at all, drive down the main street, faces screwed up at the rust and dust. Some manage to step out of their air-conditioned 4WDs long enough to buy an icy pole, feel the relentless heat, suffer attacks from little black flies and drive away.

I’d organised a lift from Wyndham to Darwin. By sea. No-one could tell me quite when Magic (the captain) and his barge would arrive. While waiting patiently for my ship to come in, I drank beer with the locals, canoed across a billabong, tightened the screws on an ubiquitous outback windmill (because the farmer was scared of heights) and was the only person to ride a bicycle to the Wyndham races. Then one night I danced like a mad thing to a band playing on the back of a semi as the moon rose full and flooded the mudflats.

When Magic and his barge eventually arrived, it was all hands on deck to unload, reload and resupply in the space of one tide. The outgoing tide sucked us northward into the Cambridge Gulf. The muddy mangrove waters gave way to wide blue inlets edged by rich red cliffs. Only a few crocodiles with mouths ajar floated just below the surface.

The sun set, more romantically than usual. We ate. Talked. Magic spoke of tiny leaking boats straying into Australian waters. I made my bed on the top deck. The canopy flapped in the light breeze. I planned to stay awake all night staring at the sky reflecting on the Timor Sea.

The rising sun revealed a blue horizon that stretched beyond belief. There was no land in sight. Just sea snakes. Flying fish. Sea snakes. A dolphin. Sea snakes. It was hot, and the smell of diesel and crusted salt pervaded while we chugged northeast.

We’d just finished our dinner of prawns and mashed potato when the tide turned and the breeze stiffened. It gets choppy when tide fights wind. I took a seasick tablet, just to be sure, and headed to my bed for a lie down. I knew I was lying on the worst part of the boat and that I wasn’t the best ocean traveller. I knew, sooner or later, that I was going to have to vomit. The tide would take six hours to change direction. I couldn’t hold out that long.

To vomit over the side from where I was would’ve landed it on the deck, or someone standing there. I didn’t want that. From past boating experience, I knew that as soon as I stood up I might not have time to climb down the ladder, take three steps and hurl. But I had to try.

I did make it to the water’s edge. Lost those lovely prawns over the side and, worst of all, my seasick tablets. They didn’t seem to work anyway but it did feel as though I’d just barfed up my last defence. Magic just looked at me. Shook his head. “It’s just a bit of chop.” The deckie laughed. “Is it going to get worse?” I whimpered. “No,” he said. But I couldn’t stop being sick. After a while there was nothing left. I forced myself from the side and snuck onto the captain’s bunk. I figured I’d do the journey back to my own bed in two steps.

But the captain’s salty sheets provided a comfort that I couldn’t leave. And didn’t. For six hours. My bladder was full after three. Felt like it might burst after four. Feeling guilty about stealing the captain’s bed couldn’t compete with the fear of retching. I pretended to sleep whenever Magic came into his cabin just in case he asked me to move. I dozed on and off, dreaming fitfully of free lunches and raw prawns. I swallowed and swallowed to keep it all down.

In the middle of the night, I felt the chop stop. Magic suggested I come out and see Darwin. “It’s beautiful,” he said. I dragged myself from his bunk feeling like the dried, smoked, full-bladdered cod that the cat dragged in. Lights shimmered on the flat sea. A working port strikes a grand pose in the quiet of the middle of the night: huge ships from countries around the world; small boats lay still on their moorings; tall wharves made of timbers from far away; fishing boats came and went; soft voices below diesel engines.

It was beautiful. We stood on the deck in shorts and t-shirts in the middle of the night at the end of a Top End winter. We docked. I climbed a ladder six metres to the wharf platform and wandered along the old, wide boards to stretch my weak sea legs. Time for a bit of sleep, said the captain. Aye, aye!

Next thing I knew it was broad daylight and a mob of people were staring in at me. I was on display. Tourists could see my sick-pasted face, my salt-encrusted hair, my dehydrated eyes. The tide had come in since we docked, and pushed my bedroom up, up, up by six metres or more.

“Big night?” called a British-accented visitor as I moved about the deck in my undies and singlet, retying the tarp that formed the wall between my bedroom and the public wharf. It was no use. The tourists were loud, curious and rising in number with the temperature. It was time to get up and explore Darwin for the first time.