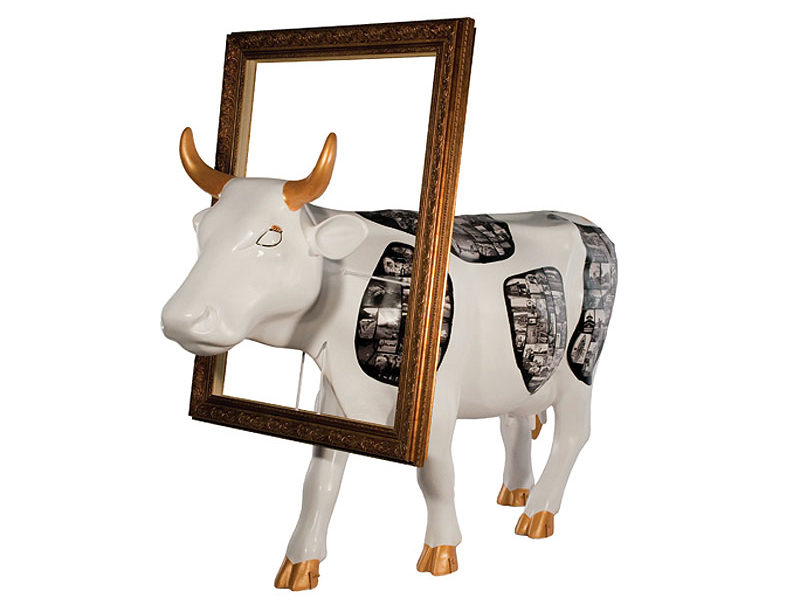 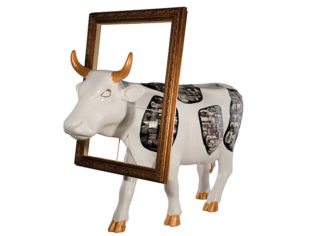 The Cowparade movement has arrived in the Augusta/Margaret River/Busselton region and, after spending three days touring the region to see some of the “moo-velous” (yes, the gags are infectious) spectacles, I can safely say they are strangely appealing and a success for the region.
From the quirky to the inspirational, the boring to the amusing and the affirming to the inside gags, the cows of the Margaret River Cow Parade are totally fun.
The cows are in fact life-sized fibreglass models. These fibreglass canvases are then presented to an artist to create their “moosterpeice”.
Australian Traveller account manager Megan Russell became the self-appointed arbiter of all things bovinely divine, and here are her picks of the Cows of Cowparade so far:

At one of the best cafes for a heart -stopping big English breakfast (by a Frenchman with the “has to be deed poll” surname Brassy England – no seriously) Megan just had to wrap her loving arms around the big surfie dudette.

The baddest of all the cows, this pasturised pirate was by far the most fun. As a lover of the bad boys, Megsy had a soft spot for the Maurader, which turned to admiration bordering on unhealthy attraction when she spotted the udder rings. Thoughts almost as unhealthy as the behaviour of the local lighthouse keepers, who would change the mercury used to reduce the friction of the turning light without gloves or breathing apparatus.

The overwhelming technicolour “bath” made Megsy giggle at the sheer fun of it. She certainly wants to buy this one at the charity auction in June as an installation for her next party. Or maybe it was just the sugar/chocolate euphoria of one of Simmos’ famous four scoop sundaes.

The Cow of Many Colours, Colonial Brewery

A rainbow cow who’s multicoloured cow ear tags raised a smile on Megsy’s face, the multi-colours comes from the many ear tags nailed to the cow. The Colonial Brewery is one of four breweries in the region and was an absolute winner with the young families with a HUGE playground and outdoor bean bags for kids and adults who were having too much of a good time.

Herd it on the Grapevine, Island Brook

Chillin’ cow without a crew, Megsy had to break out a few moves with this gal with the ‘can’s on her ears. Island Brook is a great little find in the area, with some lovely Merlot and – even better – lovely and affordable chalet accommodation.

Being firmly Gen Y, Megsy is all into self portraits, and so felt one with this girl was needed. Flametree has created such a stir in the wine world, winning the prestigious Jimmy Watson trophy with their first vintage – that’s like the Bangladeshi cricket team beating Australia in a Test.

The famous Margaret River surf certainly made its mark on many of the cows – and Megan. This bikini-clad bovine is much like the Augusta Hotel itself – simple, laid back, unfussy and totally relaxing.

A bucolic beast with a country check, Constance took Megsy back to her school uniform and inspired this flashback to “sitting up straight”: In first class. Unlike the art in the Gunyulgup Galleries, where some of Western Australia’s most avant-garde and nonconformist artists’ work is displayed and sold in the region’s first high-quality gallery.

Yes, this is one trippy cow where eggs fly, mountains levitate and stick people roam the world. Out the front of the Augusta IGA, it tripped Megan out to some of her more florid nights out.
This is just a small selection of some of the Cowparade cows. They are installed until June 2010, after which they be auctioned off. The proceeds go to charity.
Get more information on the cows themselves at the Augusta Margaret River Tourism Association website.
Find out more about the Cowparade movement.