Out and About in Kununurra, WA 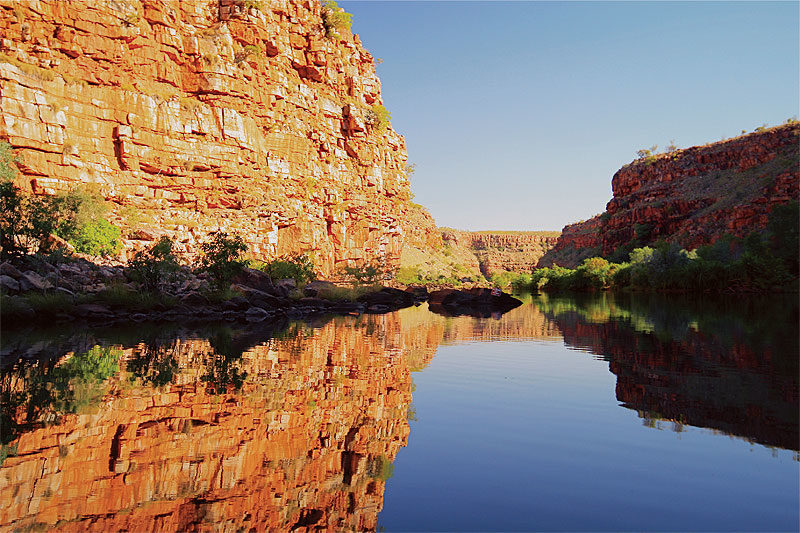 If you’re in Kununurra, it’s not going to be by accident. It’s 23km from the NT border on the eastern fringe of the Kimberleys in the middle of very little – you can’t just land here by chance.

So, as you’re about to start or end your northwest adventure probably on the Gibb River Road, soak it up with our guide to everything you ever needed to know about the eastern gateway to the Kimberley.

Less than half-a-century old, Kununurra is a contradiction, a young town on two-billion-year-old foundations. To live here, you would have to be close to crazy, impervious to humidity, or both. During the wet, it hits 40ºC and an oppressive 90 percent humidity. But for four glorious dry months of the year the temperature and humidity are in perfect habitable concert.

The town was created as the centrepiece of the Ord River Irrigation Scheme, the first phase of which was completed in 1963. After the Ord was dammed, Lake Argyle was formed. Bountiful crops followed.

Largely ignored for much of its life, the spotlight stayed well away from Kununurra – until Baz Luhrmann decided to film Australia in its surrounds. The influx of celebrity actors and international attention has since faded, and the outback hamlet is again watching its crimson sunsets in peace.

What to do in Kununurra

Kununurra’s Celebrity Tree Park is stuffed with trees planted by the likes of Rolf Harris, John Farnham, Kate Ceberano, HRH Princess Anne and, more recently, Baz Luhrmann. There are at least 150 trees of various heights and widths poking out of the earth, and a fair whack of surprise plaques, Baz Luhrmann for starters.

Ivanhoe Crossing is a short drive out of town and the waterlogged causeway is excellent for fishing and an entertaining drive.

Kelly’s Knob is a red rock hill with speccie views of the rich Kimberley sunset. The plummeting sun illuminates Diversion Dam and the bountiful irrigation areas it feeds, as well as the quiet township below. Park near the summit and hoof it to the lookout, nearly 200m up, and stay until stars stud the sky.

Ord Valley Muster injects a fervour into the town that has it swinging day and night each May.

Where to shop in Kununurra

Kimberley Fine Diamonds – Nicole Kidman shopped here – and Nina’s Jewellery bring the highly-prized and rare pink diamonds from the Argyle Diamond Mine to town. The mine itself is a short flight away. Apparently your investment will only grow as it’s believed the mine only has about a decade of life left – and it only produces a champagne glass of pink diamonds each year.

The Hoochery Distillery produces Ord River Rum (tastings $2), which tastes more like whiskey, really. They also do a fantastic rum cake. A relaxed tour will bring you up to speed on how the distillery grows its own cane and converts it into rum.

The Sandalwood Factory is about 800m down the road and sells everything scented and woody. Its attached cafe has been getting the thumbs-up from coffee fans.

Where to stay in Kununurra

Your options are pretty limited in a town this remote, so the Kimberley Grande is a rather pleasant surprise.

After several owners and a dubious reputation, it became part of the fancy Pinctada portfolio and was rapidly whipped into shape. Its swish spa rooms ooze luxury, with cow skins thrown over polished concrete floors that lead to a deep bath studded with spa jets. Simpler rooms combine comfy beds with views of the pool or garden.

The Kununurra Country Club Resort is doing its best to edge in as a rival option. In 2009 its 90 rooms and palm-shrouded grounds underwent a million-dollar upgrade. Now new artwork and flat screen TVs coat the freshly painted walls.

Best places to eat in Kununurra

The Pump House has the best view in town – and quite possibly the most gourmet fare you’ll find for 100km. Grab a balcony seat overlooking Lake Kununurra. The owner and head chef serves up locally caught barramundi, a jaw-stretching beef burger and dishes like warmed Margaret River goats cheese and roasted duck Maryland.

Gulliver’s Tavern is a bit more true blue. It’s pub grub at the upper-end of the quality scale. Early in 2010, a new chef arrived with a fresh menu that mixed exotic dishes like Moroccan lamb cutlets with traditional surf ’n’ turf. There’s also an alfresco pizza bar if you want to go casual. Beware: meals are huge; you’ll leave with a seriously full stomach.

Wild Mango is the place to go for brekkie. Kununurra’s newest eatery delivers fine coffees with passionfruit bircher muesli, croissants or scrambled eggs on ciabatta. Swing by later and get a sugar hit with their popular ice creams and cakes.

Two minutes out of town, Ivanhoe Coffee and Lunch Bar, aka Sue’s Pad, is a local institution and the best spot for a mango smoothie. Plonk yourself under a mango tree for a fresh salad or wrap.

Kununurra Art and About

Red Rock Art is a well-curated space that houses tin and timber sculpture, grass weavings and paintings. The gallery has supported/launched the careers of a number of local artists. Waringarri Aboriginal Art Gallery has a similar bent but with more of a grass roots feel. If you time your visit around lunch, you may see artists at work.