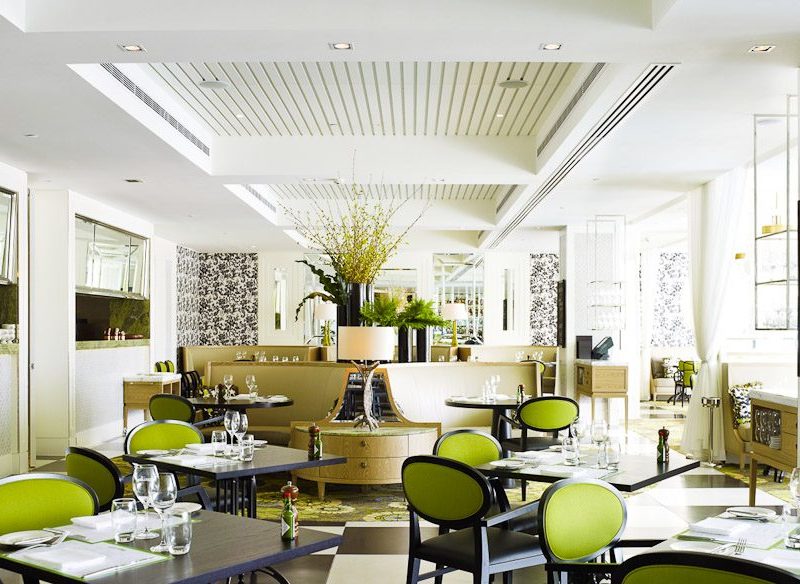 Perth’s answer to the Guillaume brand of restaurants is a jewel in the new Crown Perth, writes Rachel Hanson.

Things don’t begin well. “Can we make sure there’s a McDonald’s or something nearby? Last time I ate French food, I needed a burger afterwards,” says my lovely boyfriend (LB).

“Mid-80s sometime, with my first girlfriend,” comes the eventual reply.

It’s a retort-worthy comment, but a stern look is enough to silence him as we pull into Perth’s revamped gambling complex. Or so I’d like to think. He may simply be impressed by the looming view.

The redesign has lured big names like Neil Perry (Rockpool) and Nobuyuki Matsuhisa and Robert De Niro (both Nobu) to establish restaurants in the complex, but it’s Guillaume Brahimi’s new offering that has drawn the most attention of late. Given the two-hatted status of long-time Sydney institution Guillaume at Bennelong, and the remarkable success of more recent venture Bistro Guillaume in Melbourne, local expectations are dangerously high – mine especially. Anything that gets LB eating his words for that McDonald’s remark is a good thing.

There’s a distinct French provincial feel to the interiors, save for the crisp touches of modernity. Filmy white curtains clash with quirky wallpaper; ballooning chandeliers are clustered strategically around the room. Floors are alternately intimately tiled and wildly carpeted. Somewhat bizarrely, the restaurant overlooks a Hollywood-esque pool area and patio, which seems more Miami nightclub than moreish brasserie. But it works. Honestly.

Indeed the level of, and attention to, detail here, from the architecture and design down to the arrangement of ingredients on the plate is so refined it almost escapes your attention. Despite the newness of this place, our waitress exudes a serene confidence that makes us feel we’re in good hands and, almost unbelievably, hardly a murmur comes from the busy open kitchen. All is just as it should be, in other words.

Placemats pull double-duty as menus, reminding me of the value-for-money diners you’ll find on an any American road trip – but that’s where the similarities end. The menu here isn’t big, but it is well selected, with a heavy focus on meat, poultry and seafood dishes (the French do many things well, but catering for vegetarians isn’t one of them and the menu here is no exception).

The wine list is filled with a well-priced selection of Australian and French varieties (but thankfully doesn’t overwhelm with too many options), and a glass of sparkling, though expensive ($18), proves a decent choice.

Although we toy with the idea of escargot ($25), but the oysters ($42/dozen), steak tartare ($30), and braised octopus salad with white beans, olives, capsicum and chorizo ($26) prove irresistible.

But before the entrees comes the butter. Sure, there is bread, but really it’s just a vehicle for the good stuff: light, creamy and silky, with the slightest hint of sweetness accentuated by a pinch of pink salt flakes.

The oysters, both Pacific and Sydney Rock, need little more than a few drops of lemon juice (thoughtfully encased in mesh); alternately, a touch of the shallot and red wine vinegar.

The steak tartare, scooped up with crispy cross-hatched chips, is surprisingly complex in flavour, and the combination of fresh spices lingers long after the last bite.

Braised octopus salad looks more like a selection of tapas, and the mix of textures and tastes makes each mouthful different. Given the substantial size of the entrees, I would have been happy with a meal of just a few starters, but in the name of research, we must press on.

A main of John Dory fillets with beurre noisette ($38) are a little too simply prepared for my liking, and slightly overcooked towards the edges, but the accompanying lemony caper sauce is a soothing consolation.

LB’s choice – Berkshire pork belly with warm lentils, green apples and tarragon vinaigrette ($37) – goes completely against expectation in the best possible way. Instead of crisp, crackling skin, it pulls apart effortlessly. Rather than stewed chunks of apple, fresh paper-thin slices are arranged artfully across the top, with a vinaigrette that quietly complements the meat and lentils.

And I’ve yet to find the right word to describe the Paris mash ($9). Sinful, creamy, decadent, silky, buttery, indulgent – they all apply, yet none come truly close.

I’ve never been one to say no to sugar, but by this stage we are required to call it quits or risk being rolled out the door. All the same, as we head out I catch a glimpse of dessert at another table and promise myself to start with the chocolate soufflé next time. LB is uncharacteristically quiet on the way home. In fact, we drive past several McDonald’s and he never says a word.

The verdict
Guillaume’s restaurants earn hats for a reason. His gorgeous food, combined with the European bistro atmosphere and attentive service, are an experience.
We rated
The attention to detail and the ambience.
We hated
Parking at Crown Perth can be a bit hairy.
The score
16/20; great
The details
08 9362 7551, bistroguillaumeperth.com.au
Notes
Bistro Guillaume is open Monday-Thursday 5:30pm-late and Friday-Sunday noon until late. Bookings strongly recommended.

The AT scoring system
Our review scores are based on a series of points, awarded across a number of categories including service, amenities, design, location, value, food and beverage offerings and that elusive wow factor.
19-20 exceptional; 17-18 excellent; 15-16 great; 13-14 good; 11-12 satisfactory.