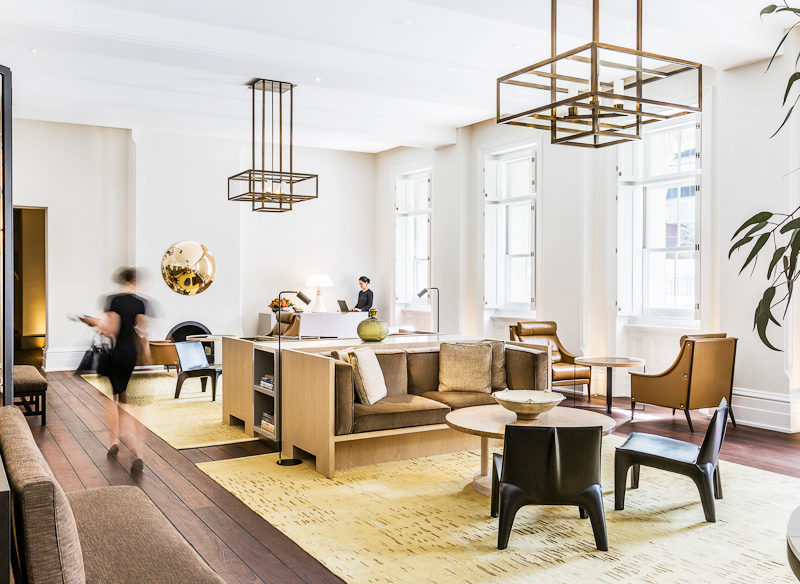 Built from the riches of the mining boom, Perth has shed its industrial mentality, diving headfirst into buzzing bars, first class restaurants and hotels, and a fun-loving vibe fuelled by the city’s wealth.

Think of the city of Perth and a mash-up of shockingly beautiful beaches, shiny steel buildings, mining magnates and pots of gold tend to come to mind.

For a long time, Australia’s most isolated capital was seen as a brassy lass, favouring new over old, big over small and expensive designer labels with a certain glint. Extremes were her thing, but that’s about all that remains after a dramatic makeover that’s also delivered a distinct personality change.

“There’s so much more to see and do; people don’t leave at 5pm when they finish work; they’re staying to enjoy the city.”

Over the past few years, fabulous little eateries and slick wine bars with inventive menus have popped up in the shadows of skyscrapers; down discreet laneways, up on rooftops and below the pavement.

In tandem, urban surfaces have been doused in street art, pop-up stores have filled empty spaces and young creatives who once left for the brighter lights of Sydney and Melbourne, or London and New York, are choosing to stay and make their mark.

No longer a land of steel, skyscrapers and suits, today the Wild West’s streets are scattered with sun-kissed people enjoying the sort of lively urban scene that hasn’t existed since WA’s 1890s gold rush.

And with every new small bar, cafe, restaurant or boutique that opens, the city redefines herself just that little bit more. “We’ve grown up,” says Jeffery. “We’re now a real city. Now we’ve got so much diversity, and we’ve really embraced our food culture.”

The change is being clocked around the globe. This year, TripAdvisor listed Perth as one of the 10 hottest destinations for travellers to visit in Australia. Lonely Planet went further, putting the city’s port town Fremantle into its ranking of the world’s top 10 cities to check out in 2016.

Then in January, Condé Nast Traveller advised its readership of one million Americans that Perth is ‘Australia’s Rising Star’. The New York Times was ahead of the trend, describing WA’s capital city as a ‘hipster heaven’ two years ago, worthy of a top 10 placing in its list of ‘52 Places to Go in 2014’.

No wonder Perth was declared the world’s eighth best city to call home, by The Economist’s 2015 Global Liveability Ranking.

Nowhere is the city’s revitalisation more obvious than along the Swan River frontage. In January, bulldozers, cranes and trucks were put on hiatus for the opening of Perth’s new waterfront precinct, Elizabeth Quay.

The $440 million riverside entertainment area – stage one in the $2.6 billion project named after Her Royal Highness, the Queen – has turned the city’s gaze away from its core business district and back towards its river-lapped doorstep.

Curated by the MRA, it’s a hive of cafes, bars and restaurants linked by promenades dotted with palm trees, a neon-lit pedestrian bridge, boat moorings and spaces where Bollywood dancercise classes, world music concerts, cultural events and food festivals such as Taste and Diner en Blanc are held.

“Before, there weren’t many places you could just sit by the river,” says Jeffery. “People feel really comfortable in this space, they’re embracing what a good city Perth is to live in.”

There are plans for a barge restaurant on the river and, from October, water taxis will take people on progressive waterfront dinners. In coming years, the blend will be boosted with more restaurants, fancy hotels (including a Ritz-Carlton) and inner city dwellings, together aimed at making Perth one of the most liveable cities in the world.

“People are seeing Perth in a new light,” says Jeffery. “I don’t hear that tag – the one I don’t use – anymore.”

That tag is Dullsville, a shameful term used even by locals as recently as eight years ago, when liquor licensing regulations changed to allow small bars to exist, setting in motion the city’s epic reinvention.

More than 130 have since opened. Similarly, there are no more exclamations of, “It’s so Melbourne!” Perth has now created a style and personality that is all its own.

In a Perth-ect storm, a new $580 million precinct known as Cathedral Square has simultaneously bloomed, drawing more fans with each new opening.

Only a five-minute stroll from Elizabeth Quay, its grass quadrangle is bordered by an ultra-modern, seven-storey steel and glass curl that is the new City of Perth Library, towering St George’s Cathedral and the game-changing, ultra-elegant COMO The Treasury hotel, a five-star outfit that flows through to a ground floor of bars, restaurants and all-Western Australian boutiques.

The hotel literally inhabits Perth’s geographical centre – known as ‘point zero’, from where all road distances in WA are measured – and fills the upper floors of Western Australia’s original government buildings, which were constructed in the 1870s but left dormant for the past two decades.

Their multi-million dollar re-awakening has revived the historic Treasury, the Lands and Titles offices and the city’s original General Post Office, reimagining the carved stone-embellished space as a haven that many guests don’t leave during their entire stay.

Each of the hotel’s 48 large, bone-hued rooms fit into the 19th century building’s original shape, so none are identical. Traces of the past are present in thick steel window shutters, vault doors, high ceilings and huge windows.

The man credited with having the vision to bring back the down-and-out part of Perth’s CBD is Adrian Fini. The Western Australian developer – and one of the founders of the now-sold Little Creatures brewery – is proud of the impact the precinct is having on Perth and its international reputation.

“People believed in what we were doing, and we spent the money to ensure we did something that was lasting,” he says. “We wanted to ensure it was Western Australian, that it had an identity through the art, the colours and the wildflowers. We then selected architects tied to WA and who understood what that was.”

Part of what makes the Kerry Hill-designed space special – and approachable – is that it’s wholly open to pedestrians, who might wander between the Aurelio Costarella boutique to the bespoke Sue Lewis chocolatier, or the florist specialising in WA natives. Fini says it was a deliberate move.

“We decided from day one that every door would be open to the public. We made it permeable and transparent. It wasn’t being exclusive, it was inclusive – and that was part of our very first brief to our architect.”

A significant drawcard is Michelin-star chef David Thompson’s Long Chim. The frenetic Thai restaurant devoted to street food heralded the expat’s return to Australia after some 14 years, pumping out what many regard as the world’s best Asian in London and Bangkok.

His fiercely authentic dishes (prepare to sweat) are executed in the Treasury building’s gritty basement. Once home to government records and archives, the whitewashed brick walls and vaulted ceilings have been splashed with cartoonish street art and Thai relics.

Fini says it wasn’t hard to convince the flamboyant chef to agree to open in Perth.

“He liked the whole concept of creating a CBD high-end, international-standard hotel with a philosophy of great food and different outlets at different price points. He understood the whole picture, that it was something that would last 100 years, or longer.”

Just upstairs, on the ground floor, the original Little Creatures team has reunited to create Petition Beer Corner, paying homage to the craft beer industry they love. Distressed, warehouse-feel walls play host to 18 taps that change regularly to explore an A to Z of the globe’s craft beers.

Petition Kitchen is across the hall, a noisy, charismatic bistro headed up by Cumulus alum, Jesse Blake. There’s also an excellent wine bar and a quietly brilliant restaurant named Post.

Fini has spent his entire life in Perth and remembers the days when it was commonly referred to as Dullsville. He says a number of things were at play restricting the city’s potential for the vibrancy seen today.

“The CBD didn’t express itself to the street very well. Laws were interpreted in the 1970s and ’80s to make it an office place, and then as the suburban side grew, cinemas and restaurants ended up in the outer rings of the city and it created a level of dullness.

“At the same time, Northbridge always had a level of vitality. The resurgence of that and the city in similar timeframes have given Perth a new lease on life. People are rediscovering the city.”

The Perth City Link project, set for completion mid-2017 will reconnect the ying and yang sides for the first time in a century. In doing so, the streets holding small, art-drizzled bars, edgy clothing boutiques and cutesy gift stores alongside strip joints and cheap Asian eateries will flow into the more polished urban sector.

They’ll be welded together by Yagan Square, a pedestrian zone committed to celebrating WA’s indigenous flavour in ways never seen before in a capital city. Another MRA project, its native landscaped stretch will host a permanent indigenous food market, aboriginal performances, educational activities, art, tours and more, in collaboration with the Whadjuk Noongar people.

“We’ll have a 45-metre tall digital tower telling the story of Yagan [a warrior who protested British settlement], which many people won’t know,” says Jeffery. “It’ll be a unique space in WA.”

It’s a stone’s throw from the Perth Cultural Centre. Once a concrete wasteland that people would hurry through, it is now a buzzing urban square that attracts all ages via night markets, pop-up bars and the annual Fringe World festival.

The free wi-fi zone is also where the Art Gallery of Western Australia, the edible Urban Orchard and the Perth Institute of Contemporary Arts meet another of Perth’s hottest new hotels, Alex (think hipster meets Vogue with a noon check-out), and where the new Western Australian Museum will open in four years.

Miles Hull, co-founder of Alex Hotel believes Perth’s reinvention will continue well into the future, as more interesting hotels join the fray and the city’s core bleeds into new areas.

He believes WA has a style unlike anything else in Australia, boosting its international cachet. “Perth’s evolved quite proudly to become a world city now, but of its own identity, forging its own culture.”

COMO The Treasury – if money is no object, stay here; one of Australia’s best new additions.

Alex Hotel – for something more hipster, check in to edgy Alex Hotel.

Rottnest Island – get out of the city via a 19-kilometre ferry ride and spend a few relaxing days by the beach.

MORE… 9 ways to play in Perth