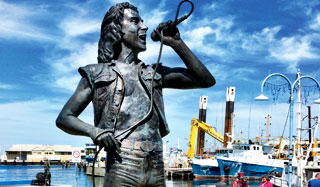 There’s a seagull perched on Bon Scott’s ripple-soled desert boot, but Bon doesn’t seem to mind. He is standing atop a Marshall amp, shoulders back, microphone in hand, paused in the classic Bon Scott stance as he gazes past Cicerello’s fish and chip shop towards the sky.

He’s wearing denim, with jeans so tight the creases encircle his manhood. A finger points to the bulge, in the unlikely event you’ve missed it. You can almost hear him belt out one of his AC/DC hits: “In the beginning/Back in 1955/Man didn’t know ’bout a rock ’n’ roll show/and all that jive.”

It’s a fitting place to erect a bronze sculpture to honour one of rock ’n’ roll’s favourite frontmen, right down on the fishing boat harbour in Fremantle, presiding over the boats and tourists enjoying their snapper and potato scallops.

After all, Bon spent his formative years here. His final resting place is up the road, in Fremantle Cemetery. This is where music fans worldwide come to try to get the essence of Bon Scott, singer of AC/DC from 1974 to 1980.

Originally from Scotland, Ronald “Bon” Scott and his family emigrated to Australia when he was a young boy, arriving first in Melbourne but settling in Fremantle when Bon was 10 years old.

Back then, Fremantle was very much a working class suburb, full of wharfies and immigrants living in simple worker’s cottages. Bon’s house has since been renovated, but has maintained its prime location on Harvest Road, North Fremantle – just a short stroll from the Swan River.

After attending John Curtain Senior High School, Bon worked odd jobs on crayboats and as a postie, though not before a stint in juvenile detention, “all in the name of liberty” no doubt. His minor altercations with the law put him where my tour begins – at Fremantle Prison, the “Limestone Lodge”.

Standing in the parade ground at Fremantle Prison under Perth’s blistering hot summer sun, I can only hope that Bon Scott committed his petty crimes in winter. The temperature in the tiny cells today is up to 55°C.

Of course, when it comes to Bon Scere are a lot of tall tales going around. Some people, like my tour guide, say that Bon spent time in the prison’s No. 3 Division on three separate occasions. (The cell he supposedly shared with a relative is pointed out to us.) Others say that Bon was only processed here before being shipped off to a separate juvenile detention centre for crimes including petty theft and carnal knowledge.

The processing room, where Bon certainly spent some time, is where detainees stood to be frisked before heading to the showers to be deloused. The room remains how it would have been then, with linoleum on the floor and a small holding cell in the corner for particularly unruly offenders.

While Bon had grown up by no means in the lap of luxury, he certainly would have been in for a shock stepping behind the iron bars of Fremantle Prison. Built by convicts, the prison, which was decommissioned in 1991, used the bucketing system for sanitation.

Dinner was gruel, tea and stale bread. Our guide tells us that 280 prisoners tried to climb the walls to make a jailbreak over the years (could this have been the inspiration for the great song?).

We’re told that tennis was the favoured sport for inmates, who would fire balls over the walls to co-conspirators; they’d return serve, having filled the balls with drugs.

We’re shown a whipping post against a wall of blue (painted this colour to calm the prisoner being lashed – though you have to wonder how effective that was!), then led to the gallows where Eric Edgar Cooke was the last to be hanged, in 1964.

Whether or not Bon spent much time behind bars here is debated, there is no doubt he sat upon Fremantle’s nearby Monument Hill looking down on the inmates, a popular pastime for many Fremantle schoolkids.

A music lover from a young age, Bon was an award-winning drummer in the local Caledonian Scots Pipe Band before joining such bands as The Spektors and The Valentines. He played shows at the Swanbourne Surf Lifesaving Club and the Medina youth club, south of Fremantle.

After moving to South Australia, Bon first joined a band called Fraternity, but his fate was sealed in 1974. From the day he wore a blonde wig with plaits and sang “Baby Please Don’t Go” with his trademark swagger on Countdown, his star continued to rise, sadly only for a short time.

Bon lived for rock ’n’ roll; he once said, “I’ve been on the road for 15 years and I (have) no intent to stop. We meet a lot of people, we drink lots of stuff and have lots of fun.”

At just 33, Bon Scott’s journey ended. He died alone in a car after a drinking binge on a cold winter’s night in London on February 19, 1980. His grave at Fremantle cemetery is marked by a simple plaque, which reads “Close to our hearts he will always stay loved and remembered every day”.

It’d be easy to miss, but for the empty bottles of Jack Daniels, beer caps and black fake flowers. It’s said that Bon’s gravesite is one of the most visited in Australia, with a good percentage of every US navy fleet (some 7000 crew) stopping by to pay their respects whenever they’e in town.

As I stand at the foot of the grave, a middle-aged Spanish fan walks over. He has cued up his favourite AC/DC song, “Ride On”, on his iPod. He sits on a bench (donated by the Scott family) and pulls out a small flask from his backpack. Straight bourbon, he tells me, and takes a swig.

Is he glad to have made the pilgrimage all this way? He doesn’t hesitate. Definitely, he says. It’s made him feel closer to his hero.

He turns on his favourite song and sits in quiet contemplation, staring at the photocopied images of Bon Scott taped near his feet.

Despite the grave being heritage-listed in 2006, the plaque has been stolen several times. It was this that led fans and friends to rally for something more: the bronze statue. Doug Thorncroft, president of the Bon Scott fan club, was responsible for having the tribute erected; successfully negotiating with the local council despite their fears the statue would bring riffraff.

I decide to call in at Little Creatures brewery, just metres away from the sta, and toast Bon with a bloke that went to his school, albeit years later. He tells me that when news broke of Bon’s passing, it was announced over the school’s PA system.

Distraught students of John Curtain Senior High School were sent home early, though some stayed behind and sang their favourite AC/DC songs all afternoon.

After the beers, I walk past the statue of the diminutive singer one last time. Had he lived, Bon would have turned 66 this July.

As the sun goes down behind him, a passing Holden Commodore slows down. The driver salutes and revs his engine in reverence to Bon, eternally the master of high-voltage rock ’n’ roll, and zooms off.

Where to stay: A park separates The Esplanade Hotel and the Bon Scott statue. The historic four-star hotel has long been Fremantle’s finest and is in a very central location; from $275 per night. Or try The Norfolk, a corner pub  that’s been in operation since 1887, with rooms starting from $90; or Quest Harbour Village apartments on the harbour, from $281 per night.

• Look up the local gig guide for a band called Hells Bells – they play the area regularly and limit their set to only AC/DC covers.