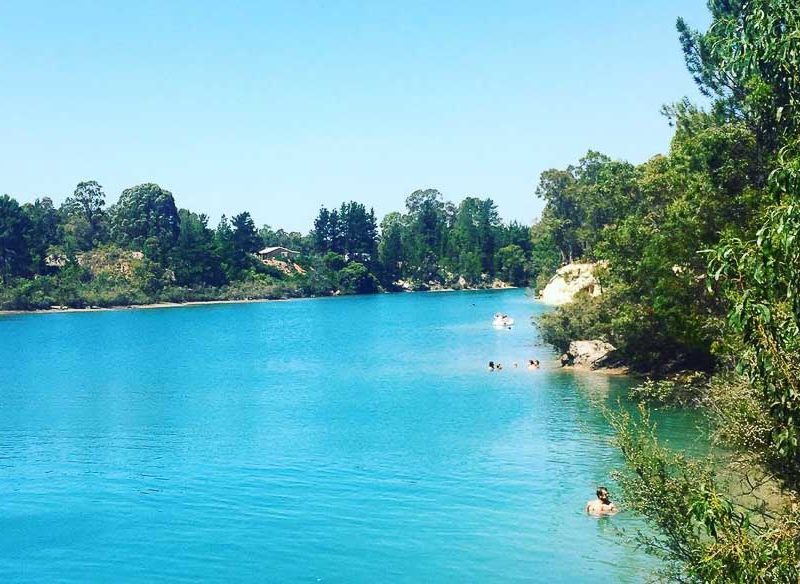 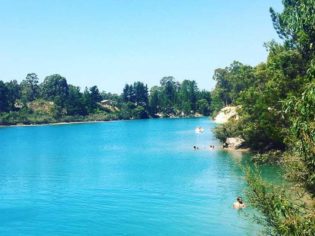 While most head down to Perth’s beaches to cool off in summer, we have a few secret alternatives. Here are the three sublime swimming spots in and around the city you should know about – but also keep to yourself.

The coastline in and around Perth is renowned for its white sands, red earth and pristine turquoise waters, but the West Australian capital offers a lot more for swimmers than just its incredible beaches. If you know where to look.

So if you’ve exhausted all the beaches in Perth, but still want to be close to the water, we’ve got a few more hidden watering holes up our sleeve for you to cool down in the summer months. Jump in the car, it’s time for a dip…

As you drive over the hill and down a winding track into Chidley Reserve, some of the most amazing views of the Swan River and the southern suburbs of Perth reveal themselves. 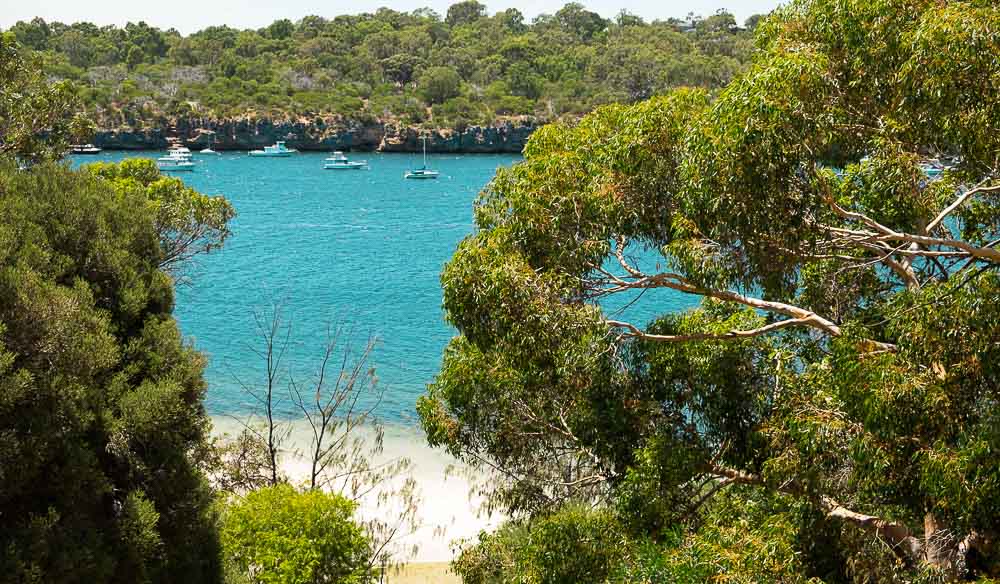 The Swan River doesn’t get much bluer than around Chidley Reserve (photo: Ella Liascos).

Chidley Way leads all the way down to the riverbank, where the water is crystal compared to many other parts of the Swan. It’s the perfect launching-point for kayaking, paddle-boarding and, naturally, it’s great for a swim.

This lesser-known part of the river is often empty on a weekday and the chances of having it all to yourself are high (if you keep the secret to yourself).

With plenty of grass to sprawl out on, Chidley Reserve is the kind of place you could spend an entire afternoon barbecuing or just relaxing by the water.

An hour south-east of Perth, you’ll find green uplands, with plenty of shade, and the Serpentine River Valley, which you can follow towards this waterfall. (It’s only about 400 metres from the carpark.)

With four walking trails of different levels to choose from, you can hike for an hour — or a few hours — before laying out a towel on the warm smooth rock faces of Serpentine Falls. You can then spend the afternoon swimming and then drying-off by this beautiful fresh water river. 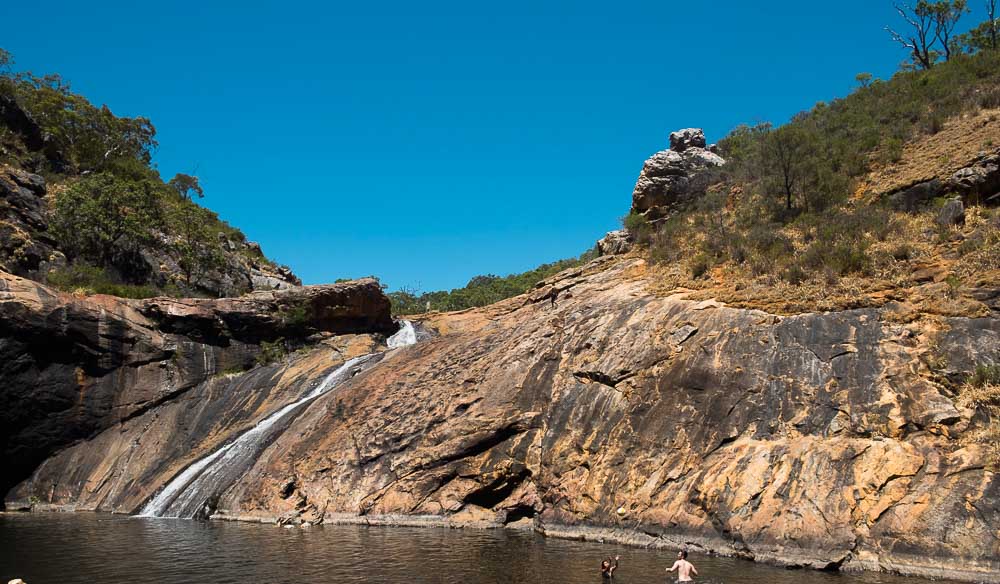 Serpentine Falls: walk the trails, have a swim to cool off. Repeat process. (photo: Ella Liascos)

Originalyl home to the Nyoongar people of the Whadjuk, the falls provided its indigenous owners with fish and fresh water. A range of other wildlife can still be spotted on the walking trail today including a variety of lizards and Western Grey kangaroos.

With plenty of shade and places to barbecue, Serpentine Falls is becoming better known among locals, but it’s still secret enough that you can head down earlier in the day or during the week to avoid sharing the falls with other visitors.

Overshadowed by WA’s famous beaches, this little-known gem is a prized secret for those aware of it (which is now you too).

Only two hours from Perth, inland from Bunbury, Black Diamond Lake is the perfect pit-stop on your way down south, or a great little overnight camping destination reasonably close to the city. 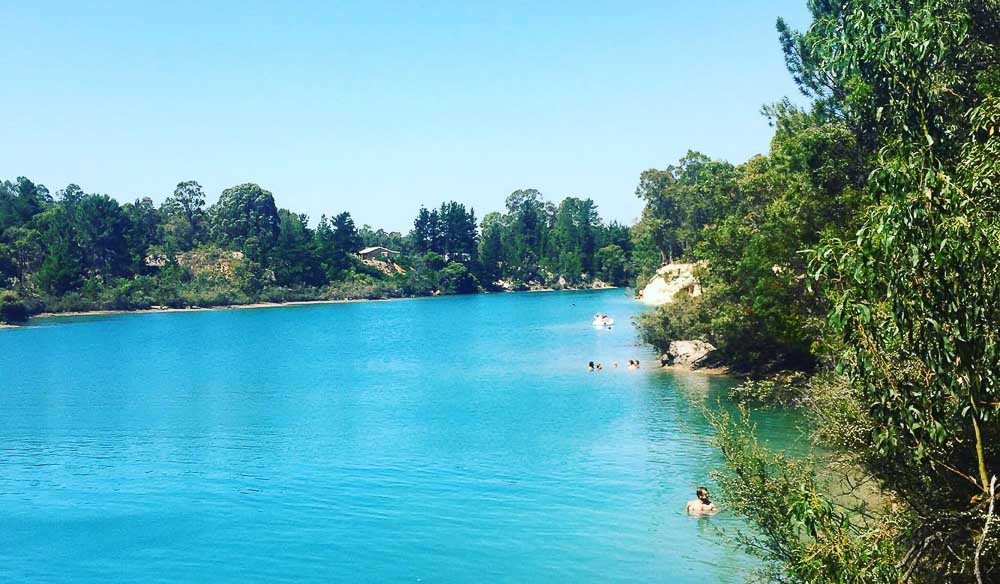 Turn off the barren Coalfields Highway onto Ferguson Road and you’ll stumble upon the oasis that looks almost out of place among the landscape, and it is.

Once a coalmine that ceased operating in the 1950s, the lake gets its colour from the limestone in the water, which looks most magnificent when illuminated on a sunny day.

The striking shades of turquoise is what makes this secluded destination famous among locals. Set out of the way, off an unsealed red-gravel road, Black Diamond Lake is something of an anomaly in WA.

You’ll likely find visitors pitching camping chairs by the lake with a picnic or floating along the river on small dinghy’s and li-los.

Locals have tied ropes onto branches surrounding the water, where you’ll often see young adventurous visitors taking turns to swing into the lake.