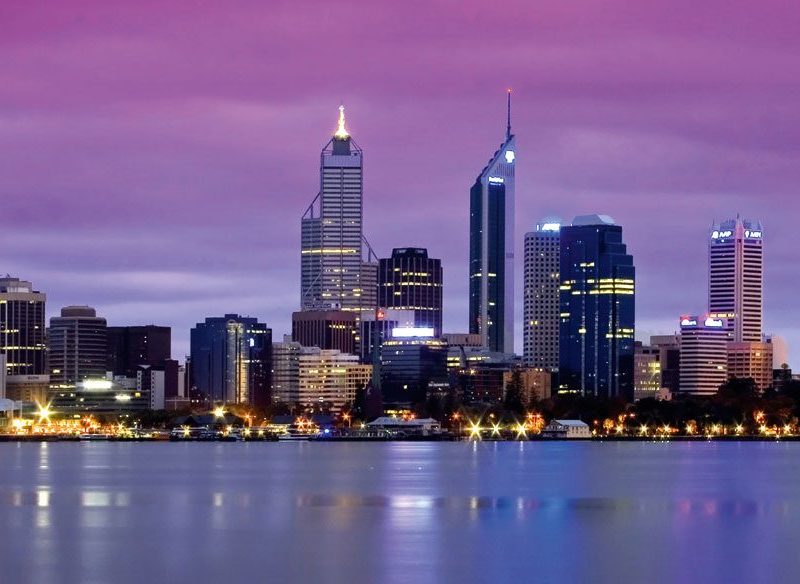 Some of the best Perth bars are in fact much higher than you think… Fleur Bainger takes the elevator up.

There are few Australians who don’t admire Bob Hawke’s larrikin line, “Any boss who sacks anyone for not turning up to work today is a bum!” Delivered by the wavy-haired Prime Minister after we whipped the America’s Cup from the Yanks in 1983, he celebrated at the Royal Perth Yacht Club until the early hours and cancelled his cabinet meeting the next day.

Nearly 30 years later, his words have been suspended in neon at a new rooftop bar in the western capital – not all that far from where the silver bodgie was partying in his patriotic jacket.

The al fresco venue, fittingly, is called Bob’s Bar and pays humourous homage both to the former ‘everyman’ leader who grew up in Perth, and the triumphant win by the Australia II, which ended a 132-year dream run by US sailors. Perhaps inspired by Hawke’s naughty side, the owners have named the menu’s hot dog choices after Blanche and Hazel.

Bob’s is the latest in a string of rooftop bars to open in Perth, as the city shifts to embrace more than just the dust and dollars billowing from the state’s mines.

As the capital’s population grows – currently about 1000 people move there each week – so too does the thirst for new, edgy venues that offer much more than Swan Draught.

Dozens of small bars have popped up in recent years, and with their success, Western Australia’s tight liquor licencing regulations have loosened, paving the way for sky-high fun. When you consider Perth’s stellar climate, it’s nigh-on criminal such venues haven’t really existed before.

“With Perth’s weather, which is good for nine months a year, it should go really well,” enthuses Lyndon Waples, chief executive of Colonial Leisure Group, the company behind Bob’s and the $10 million, four-level development it sits on, Print Hall. “It’s been an ambition of mine for years to have a rooftop bar in Perth,” he says.

Open for business since September 25, Print Hall fills the heritage-listed building Newspaper House, where local daily, The West Australian, was printed for 61 years. Knitting the two themes together, the stairway up to Bob’s Bar is wrapped in newsprint. And not just any newsprint; every page of the 1983 edition that splashed the America’s Cup victory across the front banner covers the walls.

There’s also more neon. Along with Hawke’s colourful quote, the now-restored original West Australian sign illuminates the rooftop with its incandescent glaze. Rising up beside it, the massive new BHP Billiton building looms over the airy terrace; positioned in the heart of the CBD, punters are hemmed in by a mix of glitzy skyscrapers and other revamped heritage buildings holding yet more new bars and restaurants.

Waples argues that Bob’s is classier than its contemporaries, its wooden furnishings and brass fittings contrasting with their kitsch astro turf and palm trees waving in the breeze.

“It’s Perth’s poshest rooftop watering hole, there’s no doubt about that,” he says.

Classy perhaps – we’ll get to the kitsch later – but when it comes to the cool stakes, another new bar, Mechanics Institute wins hands down. Perched above a gourmet burger bistro – yes, they deliver upstairs – the haunt is furnished with rusty typewriters and upcycled tables, all blanketed by the Milky Way.

Unusually for Perth, access to the bar is via a rear lane, adding to the intrigue. Owners of both top and bottom businesses, husband and wife team Hamish Fleming and Siobhan Blumann say they wanted to create a neighbourhood feel when they moved in to the gritty urban suburb of Northbridge and opened earlier this year.

“We thought we needed to rise above the street level and create a little escape from the hullabaloo below,” Siobhan says. “Rooftops allow you to be in the centre of the action, but also removed from it at the same time.”

Their view of the city is another plus, but perhaps not as big a drawcard as the $14 cocktails. And the moniker?

“The name Mechanics Institute references the State Library next door,” says Siobhan. “Mechanics’ institutes were the forerunners to today’s public libraries, established by factory owners for the benefit of their workers, to improve their minds and keep them out of the pubs!” Apt and ironic in one.

A few blocks away, a rooftop of a different kind is rolling out a carpet of faux grass, coating it with stripy deck chairs and edging it with palms and hundreds of plastic pink flamingos. This is Perth’s first – and only – rooftop cinema, opened for the first time this year after last summer’s trial run sold out night after night.

Crowning a seven-storey car park, it shows cult films and cherished classics on a giant movie screen rigged up on sea containers. Colourful vintage caravans serve dude food, while booze and pizzas can be delivered, but self-packed picnic baskets are equally welcome.

Marcus Canning, the man behind Rooftop Movies proudly describes the spectacle as “Miami kitsch with a dash of Hollywood glamour… We are the LA of Australia, after all.”

He says it’s no surprise rooftops are all the rage in Perth. “We’ve always scratched our head a bit about why rooftops haven’t been made more of in Perth in the past. We have the best climate of any capital in Australia,” he says. “Rooftops in Melbourne are brilliant, except when it’s cold, wet, grey and miserable… Perth is all about the sunshine and the long balmy summer nights.”

Across the train tracks that divide the city’s heart, punters flock to another lofty terrace. Aptly named The Nest, the 500-square-metre floor sits on the top level of popular bar The Aviary. It heaves with a dolled-up after-work crowd on Fridays and Saturdays, but on Mondays it hums at a more subdued pace.

As the sinking western sun coats Perth’s core in a crimson glaze, games of lawn bowls are held on astro turf while bar flies look on.

The Aviary’s Carly Odgers says a rooftop was always on the cards when the Melbourne-based owners were planning this venue.

“In Melbourne there are plenty of rooftop bars around, so the owners couldn’t understand why we don’t have them in Perth. The weather is so great, we only get about two months of rain, and it’s just so nice up there,” she says.

Decidedly urbane, this is the place to go to scope Perth’s edgiest independent fashion. One of the owners, Desi Litis points out the skydeck has a revolving lineup of visitors.

“During the day we have people who are looking at the gallery wander outside, as well as people coming up from the café to have a coffee or glass of wine,” she says. “The crowds usually come in the evenings when we have live DJs playing in the bar, as it’s a great place to chill out.”

Like all the other rooftop owners, she hopes more venues will join the skyward trend in WA, injecting Perth with greater vibrancy and creativity than it has ever seen –something Bob Hawke in particular would likely give a nod to.