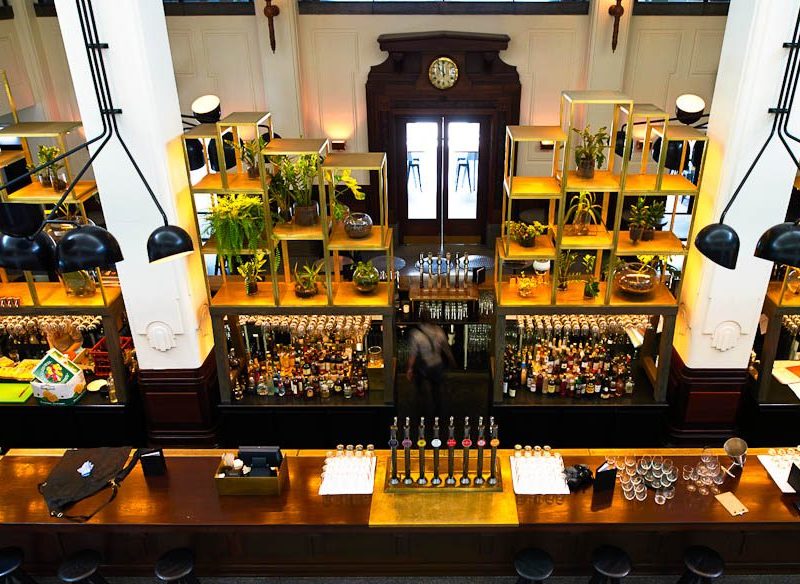 There’s no doubt about it. The lofty, character-laden, Gatsby-esque foyer bar of Perth’s first dining precinct, Print Hall, falls squarely into ‘take your breath away’ territory.

The heritage-listed art deco building, originally home to the West Australian newspaper, has been restored and revamped, and it’s clear plenty of tender loving cash has been devoted to the cause. A massive marble-topped bar, with dark wood and black light fixtures, dominates the stately white-walled interior atrium, while the vertical garden rising from atop the rows of twinkling glassware is one of many eye-catching features. It’s hard to believe that this decadent setting was once a factory churning out paper and ink.

The complex houses two restaurants, a coffee roaster and a rooftop bar, and our destination for the night – Print Hall Dining Room – is rumoured to be one of the best new restaurants in the city. Hype around town has raised the expectation level to headline-worthy heights, so it’s a dismay to discover the restaurant is squeezed into a narrow room, the kind real-estate agents might call ‘cosy’.

Tables are unadorned save for a hand-blown decanter on each; an avant-garde display of mostly monochromatic plates stands sentry along one wall. Next to the grand drama of the bar, these interiors seem small and spartan, with no linen, no cutlery, no candles – nothing. I’m all for minimalism, but this falls squarely in the ‘less is less’ category.

The décor is a disappointment but it’s one in a series, which began with the reservation. We were granted our booking on the proviso that we vacate by 8:30pm, a condition we were reminded of several times: while making the reservation, when they called to confirm the day before, and as we were being seated.

Such clear communication should be duly applauded, of course, but it’s difficult to shake the feeling that there’s a timer somewhere with our names on it as we eat. The churn-and-burn approach also seems at odds in a place where the dress code is strict enough to insist my partner wear a restaurant-provided (sadly, ill-fitting) dinner jacket.

Which brings me to the third pre-dinner snafu. In the days leading up to our reservation, Print Hall management introduced a regulated dress code; something of an oddity in this laid-back city. Unfortunately, the staff fail to mention this until we show up; only a minor annoyance, but not the first.

Still, what Print Hall lacks in décor and pre-dinner etiquette, it more than makes up for in food and service, thanks to the dynamic duo of food director David Coomer and head chef Shane Watson. A well-known name around town, Coomer is behind two of Perth’s best restaurants, Pata Negra and Star Anise (which is consistently ranked among Gourmet Traveller’s Top 100), while Watson has garnered a respected international reputation as the executive chef at Sydney’s Wildfire and the Sofitel Krabi Phokeethra in Thailand. Together they’ve created a contemporary menu dominated by local produce.

Before the menu, though, there is the wine list. ‘List’ might be an understatement; with over 40 chapters (yes, chapters), it’s more of a tome. Created by former Young Australian Sommelier of the Year Daniel Wegener (previously of Quay) and backed up by a 22,000-bottle-strong wine cellar, it’s already a strong contender for the 2013 Australian Wine List of the Year.

As you’d expect, the selection is excellent, if a little overwhelming. The by-the-glass selection is well-rounded and decently priced, with a glass of Bella Ridge Estate rosé ($11) light and slightly sweet. For those who just can’t make a decision, there’s also a flight of three wines (either white or red) available, starting at $22.

Word on the street is that the oysters here are not to be missed. And the street never lies. A mixed dozen of Albany Rock and Franklin River oysters, served with a champagne mignonette ($4 each), are briny and creamy, and the pink-hued mignonette an ideal acidic complement.

The entrees, served with a flourish by our very tall, very thin, very French waiter (who earns gold stars all around for his knowledge, politeness, and warm sense of humour), prove to be tiny portions, artfully arranged on oversized plates. Hadn’t this concept gone the way of booze-soaked business lunches? Size notwithstanding, they are sensational.

Fleshy Kingfish Crudo ($28), surrounded by minute marbles of apple and cucumber, and heavily garnished with dill and poppy seeds, is full-to-bursting with flavour. The Blue Manna crab cake ($29) is equally delightful: a light spread of Avruga caviar, with a daub of silky aioli, melds perfectly with the light taste and texture of the shards of crab meat.

A main of Amelia Park lamb ($43) is faultless. The perfectly pink loin is scattered with thin slices of miniature zucchini, and the pea puree so smooth and creamy that I initially mistake it for avocado. My partner’s deconstructed Duck Cassoulet ($42) – a celebration of texture, with firm, velvety duck breast contrasted against soft white beans and the crunchy saltiness of a croquette – is rated, between rapturous mouthfuls, as “sublime”.

Dessert, however, is the show-stopper. Print Hall’s signature dessert, Lemon ‘Spilled’ ($16), is a tipped glass of thick lemon curd with a trail of mini-meringues cascading across the plate. Crunchy almond crumble and tangy quenelles of ruby grapefruit sorbet round out the texture and flavour palette. Strawberries and cream ($17) sounds simple and light but is neither, in the best possible way. Cooled, stewed strawberries and rhubarb with sweet vanilla cream are given a serious kick from a sparkling rosé granita to allay the sweetness.

An unexpected accompaniment to dessert? The noise. By the time our last course comes out, I’m straining forward to keep up with the conversation. Those around us are having the same problem, it would seem – acoustics, teamed up with the background music that gets louder as the night goes on, aren’t the best if you’re keen for some deep and meaningful (or really even light and non-meaningful) conversation.

But with a few minor fixes, I wouldn’t be surprised to see this dining room sporting a hat, maybe even two, by next year.

We rated: The phenomenal desserts and faultless waitstaff.

We hated: Feeling pushed for time and the noise factor.

Where: Brookfield Place, 125 St Georges Terrace,Perth, WA (in the heart of the CBD)

Notes: It’s on the pricey side (which in a town with a reputation for being expensive, is worth mentioning), so save it for a special occasion, or just drop in for a drink and dessert. If the weather is cooperating, be sure to have a pre- or post-drink on the rooftop at Bob’s Bar.