It’s the dream of many to be a child again. The ice-cream and fish fingers diet, the ability to get away with saying and doing bad things because adults think it’s cute, “work” consisting of a particularly tough sum in maths class . . . it’s enough to make anyone nostalgic.

Arguably, though, the best thing about being a child again would be regaining that complete lack of fear. Cars can’t run you over, you’ll never fall off anything and playing with matches won’t hurt a bit. You can also gleefully scamper up precarious-looking trees while adults look on and wince.

Nowadays, tree climbing is a bit more risk-packed. Take the Dave Evans Bicentennial Tree in the Pemberton Forest of southwest WA – one of three giants in the region, along with the Gloucester and Diamond Trees – which is more an occasion of stomach-tightening fear than glorious opportunity.

In the Warren National Park 10km south of Pemberton, this karri tree soars 69m in the air, and someone has thoughtfully built a flimsy looking staircase around it. As protection, you have a mesh that’s little better than chicken wire and you’re treading on thin strips of steel. One misplaced foot, therefore, and you’re going to be in an awful lot of trouble.

Hate heights. Hate them, hate them, hate them with knobs on. Climbing something so high and blatantly dangerous is not my idea of fun, but with the rest of the group chickening out (boo! hiss!) someone has to restore some honour.

Gingerly I step on to the first rung, which mercifully doesn’t give way under my elephant weight. My legs may, though; they start to turn to jelly as soon as an unsafe jump-off distance is reached. Roughly a third of the way up is a viewing/recovery-from-impending-asthma-attack platform. Great view, lovely trees, but after you’ve just clambered up the equivalent of a two-storey building any photos you take are liable to be shakier than a blancmange on a washing machine. Especially when there’s still more than half of the climb to go. And then the getting down part . . .

After about 20min of self-flagellation on the cowardly merits of backing out now, it’s time to restart the baby steps. With the knowledge that coming down is going to be that much more terrifying, each rung is a triumph of willpower. “Aided” by shouts from the ground of “watch out for the missing rung” and “if you fall, you’ll probably die instantly – no pain,” the top section is conquered, somehow. Once there it’s easy to imagine how Sir Edmund Hillary felt. The biggest kid, up the biggest tree of all, the king of the playground.

Then, of course, there’s the matter of returning to earth. Any chance of a helicopter ride? 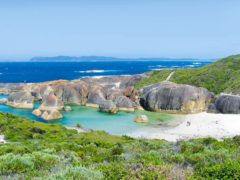 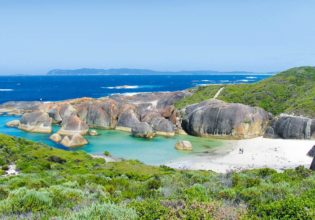 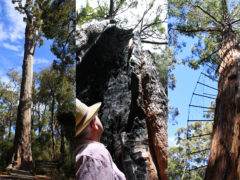 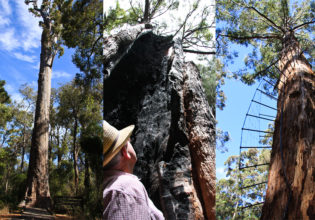 Giants of the Forest: Valley of the Giants, WA

AT’s Rob Gordon goes tree crazy in southwest WA, visiting as many forest behemoths as he can in a single day. When you travel through southwest W...