Ten Things To Do In WA For $10 And Under 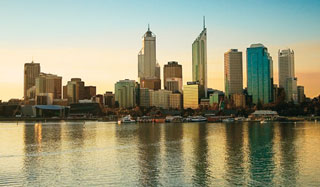 If the best things in life are free, then the second-best things must cost just under ten bucks. To that end, budget travel hound Sarah Tierney has come up with some great ideas for saving money on travel in these lean times.
1. Take in the sights of Peth with an i-City hosted walking tour that, by the way, is also free. There are many tours to choose from, with an orientation tour ideal for first-timers to the city, and other tours including a convict’s tour, icon tour, art tour and – for the shopping lovers – the bling tour around the jewellery stores of Perth. You can also pick up booklets for self-guided tours. www.cityofperth.wa.gov.au

2. Visit Fremantle, the lively and decidedly arty port town about 20 south of Perth. Try some fish and chips on the harbour and take a walk along the 19th Century streets finding all the hidden gems Freo has to offer.

3. As a hidden secret in the middle of Perth, Heirisson Island has been usually ignored, apart from the odd jogger or fisherman who escapes the city by going across the Swan River to the island. Slowly but surely, however, Heirisson Island is becoming a destination to visit, with its views across the skyline, natural flora and many kangaroos. Entry is free.

4. Kings Park and Botanic Gardens is the best for free entertainment in Perth. With free guided walks, viewing tower, nature walks including a walk dedicated to the soldiers who fought on the Kokoda Trail and a walk above the gardens. Called the Federation Walkway, the bridge sits high in the treetops allowing magnificent views of Peth and the gardens. www.bgpa.wa.gov.au

5. Near Augusta in southwest WA lies Cape Leeuwin Lighthouse – Australia’s tallest lighthouse. This whitewashed building sits atop a cliff where you can see the meeting point of the Southern and Indian Oceans. Funnily enough, it’s the only place in Australia where you can see this. On a good day, you can also spot sea lions, dolphins and whales. Entry starts from $5 for adults.

6. The WA Museum is always holding interesting and exciting exhibitions: for example, their most recent was exhibition was on great Aussie singer/songwriter Nick Cave for their Winter Arts Season. With a plethora of photographs, artwork, notebooks and original lyrics, as well as objects from the musician’s own home, it’s a treat for all music lovers. Entry is free. Check out www.museum.wa.gov.au for regular updates to their What’s On page.

7. The ANZAC Coves is an exhibit at the Museum of Performing Arts honouring the unsung heroes of WWI, the entertainers who travelled from barn and shed near trenches to perform songs and skits for soldiers. These men were not professionals; they were active servicemen, performing while on leave, and at least three survived the Gallipoli landing. ANZAC Cove is at the Museum of Performing Arts as part of the Winter Arts Season. Entry is a gold coin donation.

8. One of the most amazing things you can see for free in WA is the famous Staircase to the Moon in Broome, a natural phenomenon that only happens when conditions are perfect. The rising of the full moon reflects off the exposed mudflats in Roebuck Bay at low tide to create a beautiful illusion of a staircase reaching the moon. You can see this along Roebuck Bay and Town Beach where local markets are held.

9. Queensland isn’t the only place in Australia to be home to evidence of dinosaurs. Gantheaume Point near Cable Beach in about 6km from Broome. The landscape is a blend of red cliffs and the stark blue water and, at low tides, reveals fossilised dinosaur prints and plant fossils thought to be more than 130 million years old. If you go during high tide, a plaster copy can be found on top of the cliffs.

10. If you’re up for a healthy bike ride, the Munda Biddi Trail is for you. It starts in Mundaring, about 35km east of Perth, before winding through river valleys and eucalypt forests of the southwest. And best of all, the Munda Biddi Camp Huts and tent sites, about a day’s ride apart, are all free. www.mundabiddi.org.au