Everything you need to know about the Wolfe Creek Crater 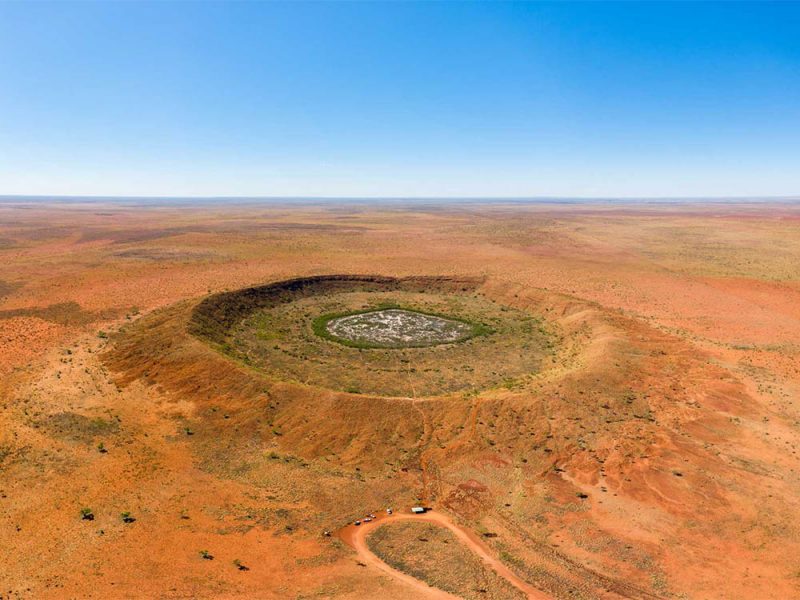 Wolfe Creek Crater is a dirty big hole in the ground created by a meteorite that smashed into WA umpteen thousand years ago.

A meteorite is a solid particle from outer space that has survived entry through the atmosphere and reached the earth’s surface. Australia has about 25 known meteorite impact craters, of which Wolfe Creek is the most spectacular.

Wolfe Creek Crater was formed around 300,000 years ago, during the Pleistocene period (in geological terms, that was only yesterday). It lies on the edge of WA’s Great Sandy Desert, within the Wolfe Creek Crater National Park, and is accessed by an unsealed road that joins the Tanami Rd, 145km south of Halls Creek.

The crater is an almost perfect circle with an average diameter of about 880m. A well formed rim stands 25m over the surrounding landscape. Originally 150m deep, today it has been largely filled in by windblown sand, gypsum and calcite giving the crater an almost perfectly flat floor.

It’s the second largest crater in the world from which fragments of a meteorite have been recovered. On its western slopes, near the top of the crater rim, rusty balls of iron-rich rock known as “shale balls” lie scattered about. Analysis of recovered material suggests the crater was formed by an iron-nickel meteorite that weighed around 50,000 tonnes, was 50m in diameter and travelled at 15km/sec. The impact of such a mass created the bowl-shaped impression and pulverised the underlying rocks. The energy would have been converted into heat, causing a violent explosion, melting and vaporising the meteorite.

It’s estimated that meteorite impacts like Wolfe Creek may occur every 25,000 to 50,000 years. The latest troublemaker is a 400m tall asteroid named Aphophis No. 99942. (The name comes from the Egyptian “Apep”, the Destroyer.) NASA experts have given a one in 43,000 chance of it smacking into Earth in 2036. This is considered a “negligibly small chance of collision.”

Wolf Creek the movie was released in 2005, a horror flick in which three backpackers are “helped” by a crazier-than-craphouse-rat bushman who laughs in all the wrong places and is far scarier than a 15km/sec meteor.

But did you know

On January 18, 1991, when we were busy watching missiles over Iraq during the Gulf War, a mini-asteroid about 10m in diameter named 1991 BA came very close to crashing into Earth.(Actually, it missed by 170,000km, but who’s counting?)

And did you also know

In WA and SA, meteorites are the property of the government and must be lodged with an appropriate museum. In the other states, “finders- keepers” applies.