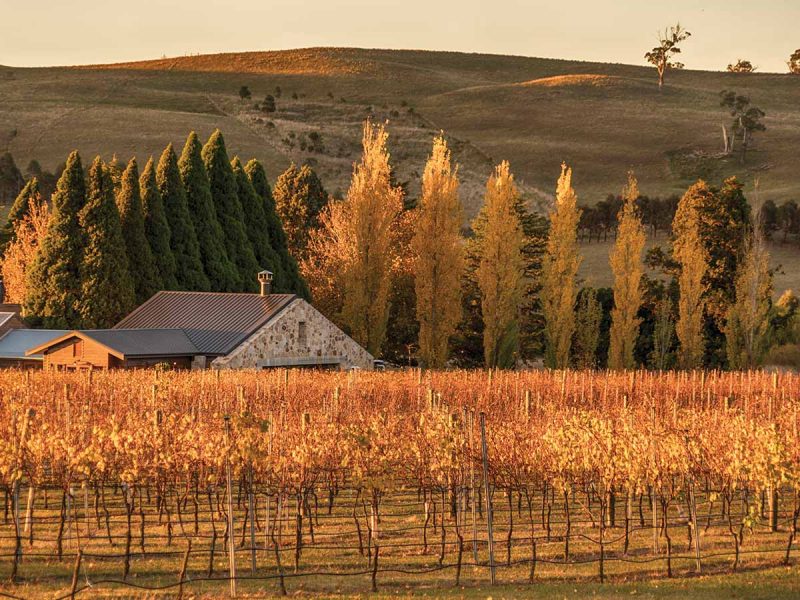 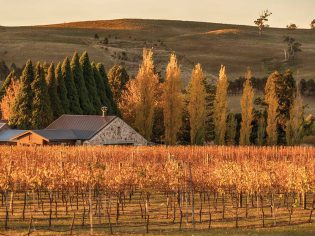 Berrima has boundless charm and is surrounded by some of NSW’s loveliest landscapes.

The historic village of Berrima is Australia’s best-preserved village from the 1830s, known for everything from its bushrangers to its book barn, its killer pies, wineries and Georgian courthouse. The Southern Highlands town, which was built around a village green, is also home to Australia’s oldest surviving gaol. Here are some of the best ways to explore Berrima village and beyond. 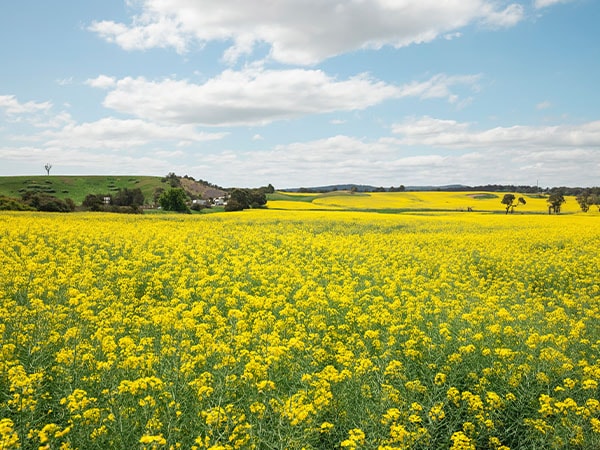 When first settled in 1831, Berrima set its sights on becoming the regional centre of NSW – and built a gaol and courthouse to celebrate. However, a new railway line was built in 1867 that bypassed the tiny community, leaving it frozen in time for close to a century.

Of course, the area around Berrima was once occupied by the Traditional Owners of the Land, the Dharawal people and in fact, the town’s name originates from an Indigenous word that means ‘to the south’. 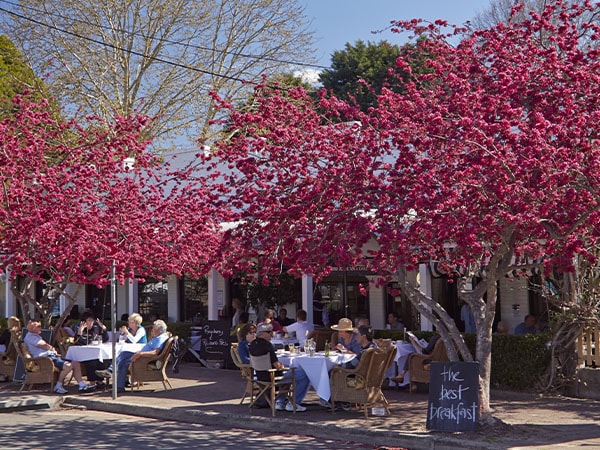 The historic village of Berrima is Australia’s best-preserved village from the 1830s. (Image: Destination NSW)

Check out the Berrima Cluster Map so you can bounce between heritage sites and foodie experiences in Berrima village. The General Store Café is a local favourite owned by Italian chef Diego Arata and a top spot for country-style cakes and coffee roasted locally by Rush Roasting. If you’re self-catering, pick up some Taluca Park eggs and pork,  homemade focaccia and lasagne and jams at the store where Diego’s Italian hospitality is on show. 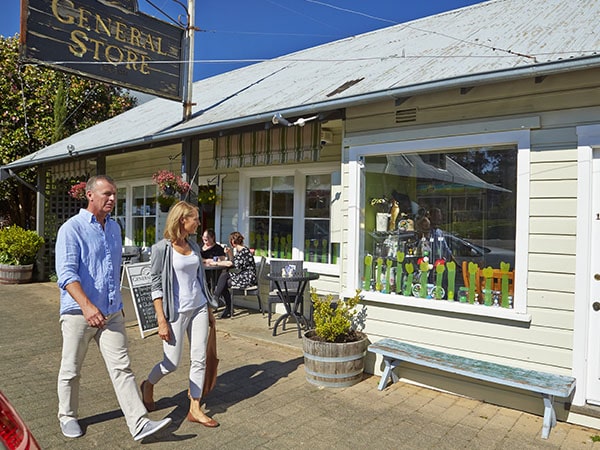 Mrs Oldbucks is another charming Berrima institution for everything from confectionery to chai and chutney.

Josh’s Café is much beloved in Berrima village for the great food, warm welcome, live music and atmosphere the staff create. Owner Joshua Leving understands the cafe is more than just a place to linger over lunch; it’s also a charming community hub that is open for dinner Thursday to Sunday serving a rotating roster of dishes ranging from spicy dahl with flatbread to pho and pizza.

Eschalot has had a refresh under new owners Matty Roberts and Cassandra Wallace who have turned up the charm at the sandstone cottage. Expect fresh posies of flowers and quirky artworks inside the low-line cottage and for much of what you sample on the Feed Me Menu to be sourced from the kitchen garden out the back. Check Instagram to see what chef Matty is cooking up for his Farm, Fire, feast dinners in the courtyard festooned with fairy lights. 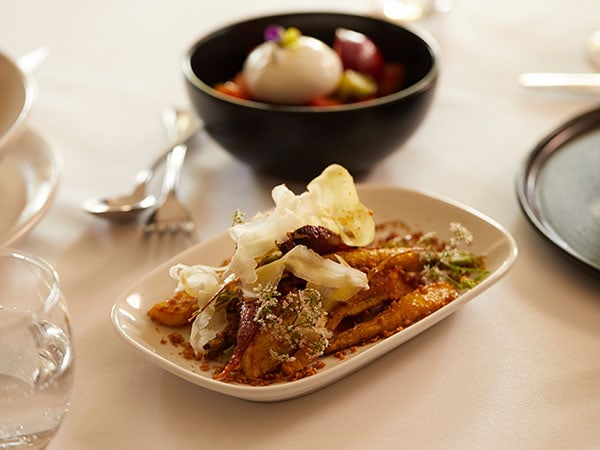 Expect much of what you sample on the Feed Me Menu to be sourced from the kitchen garden out the back. (Image: Destination NSW)

Try out Berrima’s pies and bakeries

The Gumnut Patisserie has three venues dotted across the Southern Highlands thanks to the demand for its creative cakes, slices, pastries and pies. It’s the place to go for morning tea. Over Easter, Gumnut Patisserie’s spice-packed hot cross buns run out the door, but the pies are perfect all year round. 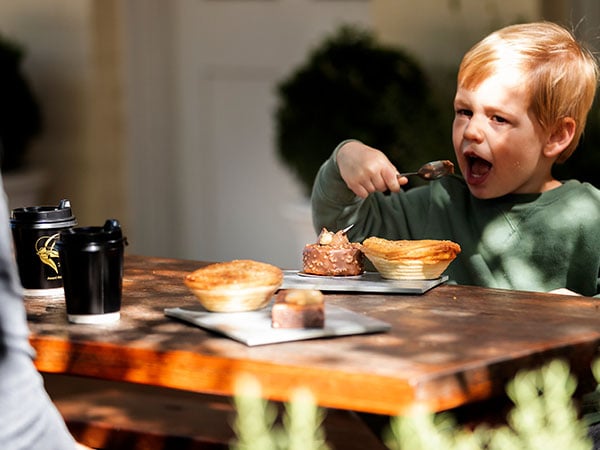 The Gumnut Patisserie is the place to go for morning tea. (Image: Destination NSW)

Pumpkin damper, pecan plaits or freshly baked Danish pastries from the Old Bakery Tea Room are also worth popping in the picnic hamper.

Pop into Baked in Berrima downstairs from Mrs Oldbucks for apple tarts and chunky beef pies, one of many irresistible stops along the Southern Highlands Pie Trail. The bakery is the sister business to The General Store Cafe run by Diego Arata and it is where to find one of the finest brews in Berrima village. The European-style bakery-cafe is also a charming spot to pick up coffee, some fresh sourdough and croissants, which is open Friday to Sunday.

High tea at The Magpie Cafe is also popular in Berrima village.

Fill up on pub grub at Surveyor General Inn

A personal favourite is the Surveyor General Inn, which continues to serve up some wicked pub grub and is said to be the oldest continually operating hotel in Australia. The menu at Bistro 1834 at The Surveyor General Inn reads like a Greatest Hits list: expect classics like bangers and mash, char-grilled Scotch fillet with red wine butter, and chicken parmigiana. There’s also a vegan curry of chickpea, potato, tomato, steamed rice and crispy onions, which is one of the finest plant-based pub meals in the region. 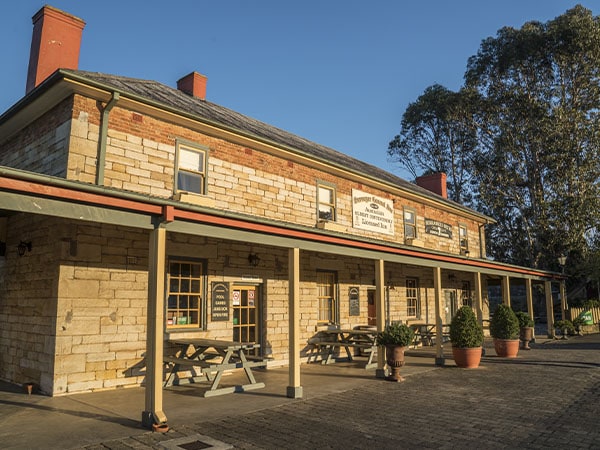 Surveyor General Inn continues to serve up some wicked pub grub and is said to be the oldest continually operating hotel in Australia. (Image: Destination NSW)

Built out of convict-hewn sandstone and completed in 1838, The Berrima Courthouse & Museum is a place for history buffs, and those interested in early colonial architecture. The façade of this impressive heritage building comprises four Doric columns with classic Greek bases. You can learn about the history of the building, experience an immersive Sound & Light show, take a self-guided tour of the Courthouse to learn about infamous court cases or steel yourself for an overnight ghost tour. 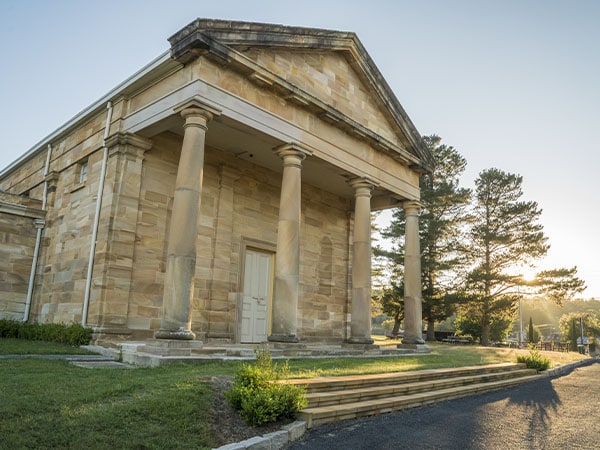 The Berrima Courthouse & Museum is a place for history buffs, and those interested in early colonial architecture. (Image: Destination NSW)

Overlooking the Surveyor General and a stone’s throw away from the Wingecarribee River, the impressive Berrima Gaol building housed German internees during the First World War, munitions during the Second World War, and bushrangers and crooked State politicians, too.

Inmate Rex Jackson was famous for making cuckoo clocks during his stay. Before the gaol was built, convicts were chained up in one of the cellars beneath the inn.  You can gawp at the gaol on a self-guided tour of Berrima village. 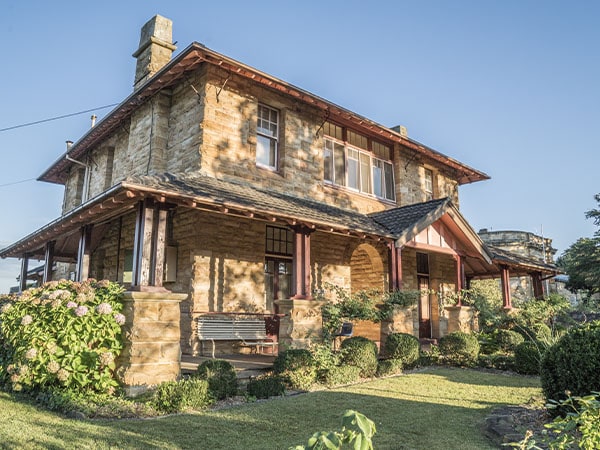 From its imposing position overlooking Berrima village, Harper’s Mansion has enjoyed stints as a home, presbytery, convent and almost abandoned ruin. The original mansion was built by James and Mary Harper soon after 1834. But the couple’s grand vision for the property was stymied during a financial downturn in the 19th century.

Despite temporarily falling into disrepair, locals have reclaimed the red-brick property in recent years and returned it to its former grandeur. As well as reproducing original paint samples and zhoozing the veranda, residents planted a backyard maze that’s deceptively tricky to navigate. Visit the heritage-listed property, which is managed by volunteers, to enjoy a picnic amid the heritage roses or back at the charming brick-and-stone Harper’s Cottage.

Thanks to the tireless work of nature-loving locals, the Wingecarribee River continues to offer up a stunning assortment of bushwalks, fishing spots and secluded picnic haunts. To explore the area grab a map from the Berrima Court House Museum, which also has the keys to various historic buildings. The well-maintained paths are easy to tackle and great for adventurous visitors. 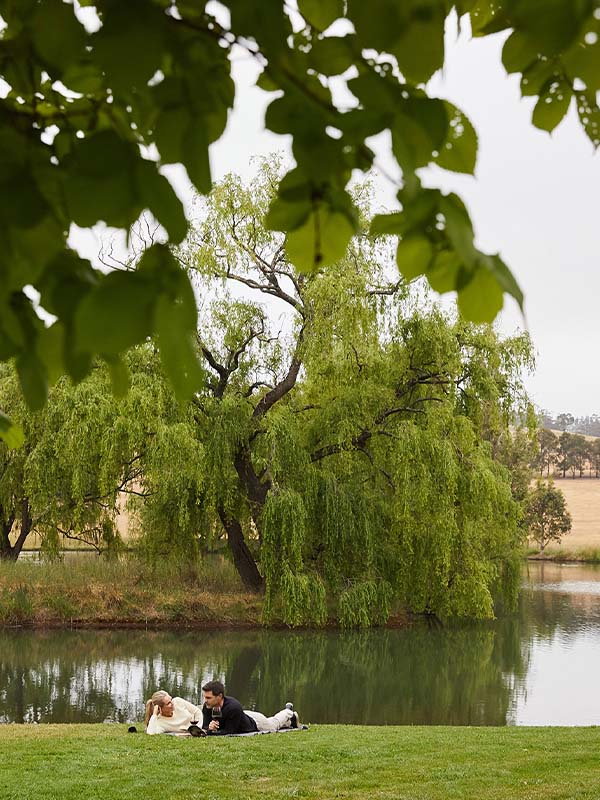 Walking the Wingecarribee River on the traditional lands of the Gundungurra people is one of the best ways to experience Berrima. The Berrima River Walk is signposted to point visitors to the boat-building efforts of the German nationals who were interned in Berrima Gaol from 1915 to 1919. The boats were built using bush timber or scrap metal and were created when the internees were out on day release. The signed walk starts in the Berrima Picnic and Camping Ground and follows the river’s natural curves. It is a mostly flat track that takes just over an hour. 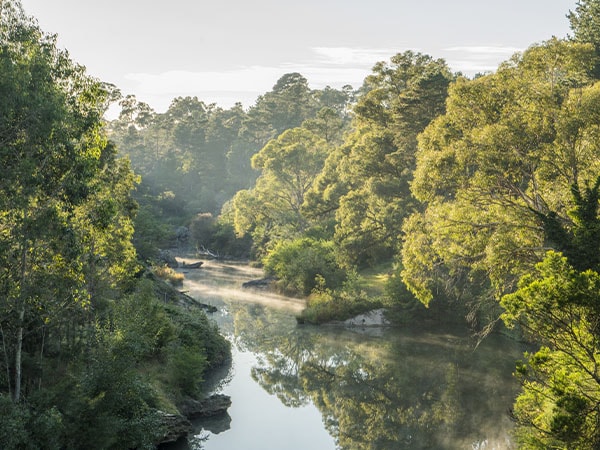 Walking the Wingecarribee River is one of the best ways to experience Berrima. (Image: Destination NSW)

The literary-minded should plan to spend an entire day exploring the atmospheric Berkelouw Book Barn, which sells books on every imaginable topic. The Berkelouw Book Barn was built last century and has been converted into a little fantasy land for bookworms, boasting exquisite chandeliers and stunning artworks, and famed for its collection of second-hand, rare and antiquarian books and huge sections dedicated to specific genres.

After letting your imagination roam in the section dedicated to Fiction, set yourself up in the Berkelouw restaurant to savour cuisine inspired by the seasons of the Southern Highlands. 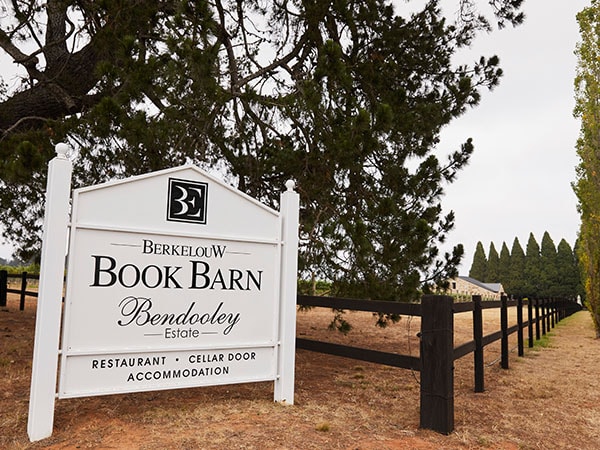 Stop for a tipple at Berrima’s wineries

The swanky new cellar door at Bendooley Estate is open for wine tastings matched with cheese and charcuterie from 10 am and from 3 pm daily with wine sales until 5 pm each day. 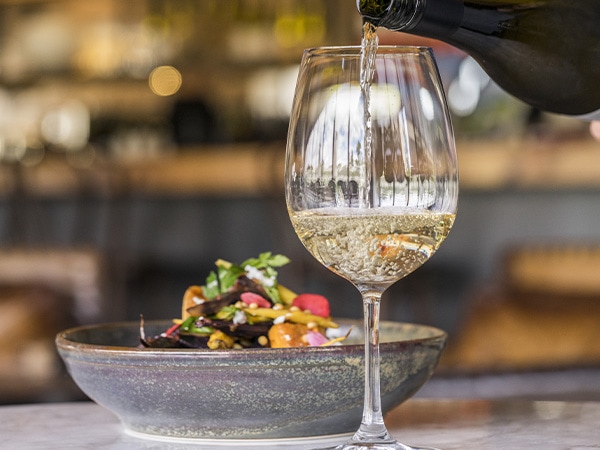 The sumptuous setting, which is adjacent to the Berkelouw Book Barn, overlooks the estate’s vineyard and is an architecturally designed masterpiece of glass, steel, century-old pine and locally sourced stone. 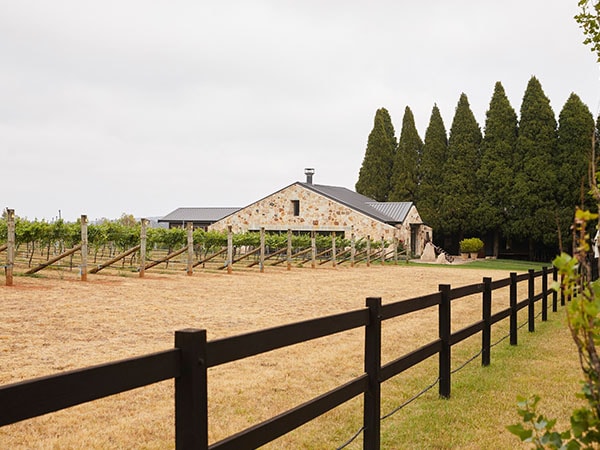 The cellar door at Peppergreen Estate in Berrima village was once an antique store and now houses a tasting room where you can sit and enjoy a glass of premium cool-climate wine produced from the undulating slopes of Canyonleigh in the beautiful Southern Highlands.

All up, there are more than a dozen wines to taste, and a range of Australian extra virgin olive oils to sample as part of the cellar door experiences, which include a Wine and Dine option, Sparkling Breakfast Experience and Wine & Canapes. 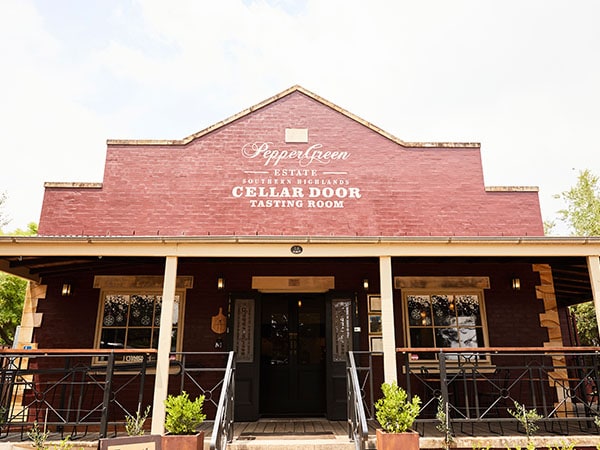 There are more than a dozen wines to taste, and a range of Australian extra virgin olive oils to sample at Pepper Green Estate. (Image: Destination NSW)

The Berrima Vault House is a contemporary, heritage-preserved restaurant with rooms that have reimagined the Taylor’s Crown Inn for a new era. The Berrima Vault House was originally hand-built by convicts in 1844 and it remains a creative space to gather, drink and dine (on weekends only for non-guests). Bunker down in Berrima for a long weekend by booking a stay at The Residence at Berrima Vault House, which accommodates four. The Residence is fully self-contained with a private kitchen and amenities. Time your visit to coincide with Acoustic Nights in the Rose Gardens every Thursday and the quintessential Sunday Roast. 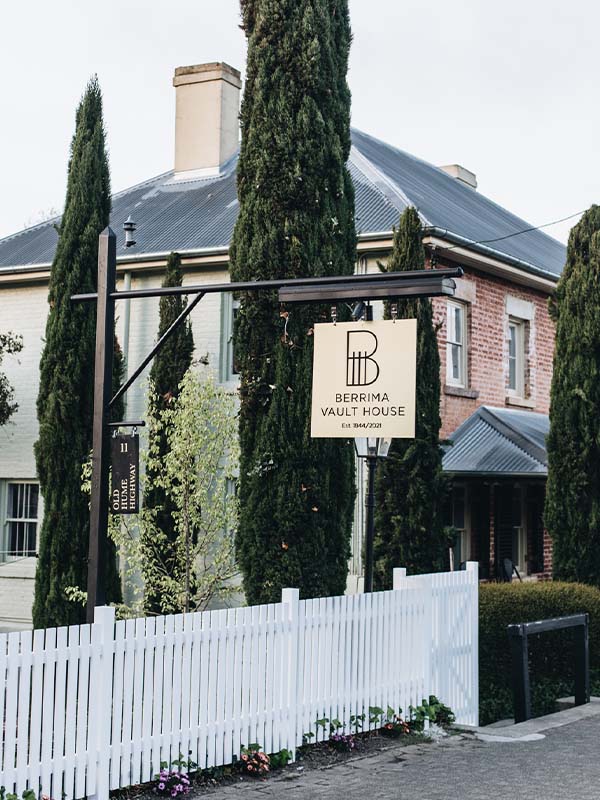 Sometimes a bit of peace and quiet is all that is required of a weekend away. The historic Hillside Cottage sits on a corner of scenic countryside, nestled in the heart of beautiful Berrima village. Established in 1843, the character-filled cottage can accommodate up to eight guests and is well placed for weekenders who want a romantic getaway, to play golf, visit local wineries or simply relax and retreat. Although the cottage has had a lick of paint, and a rejig, its heart and soul remain intact. 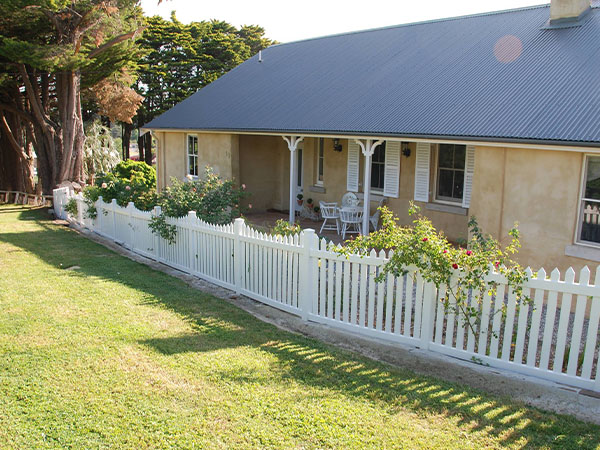 Berrima is situated on the Old Hume Highway and is about a 90-minute drive from Sydney on the way to Canberra. One of the most relaxing ways to get to Berrima is to catch the train to nearby Mittagong, Bowral and Moss Vale, which takes just two hours from Sydney’s Central Station. You can then get a taxi to Berrima.