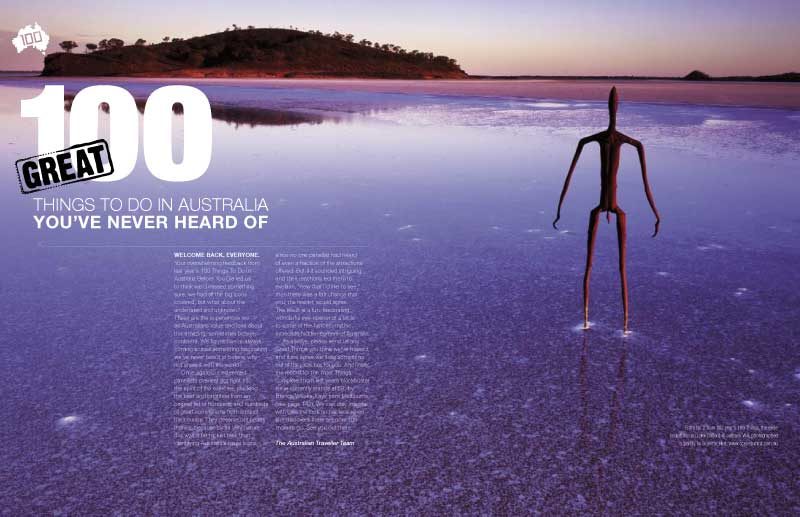 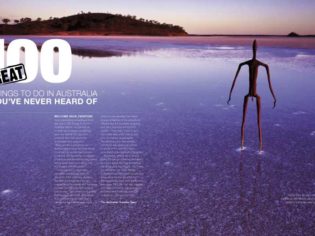 100 Things To Do In Australia You've Never Heard Of.

From incredible sculptures to swimming with seals, sharks and tuna. This is Australian Traveller’s list of 100 Great Things To Do In Australia You’ve Never Heard Of

Overwhelming feedback from our seminal 100 Things To Do In Australia Before You Die led us to think we’d missed something: sure, we had all the big icons covered, but what about the underrated and unknown?

These are the experiences we as Australians value and love about this amazing, sometimes bizarre, continent. We figured we’re always coming across something fascinating we’ve never heard of before, why not share it with the world?

Once again our esteemed panellists got right into the spirit of the exercise, plucking the best and brightest from an original list of hundreds and hundreds of great nominations from around the country. They deserve our hearty thanks, because by its very nature this was a far trickier task than identifying Australia’s major icons, since no one panellist had heard of even a fraction of the attractions offered. But if it sounded intriguing and their reactions led them to exclaim, “now that I’d like to see,” then there was a fair chance that you, the reader, would agree.

The result is a fun, fascinating, wonderful eye-opener of a bible to some of the historic, mythic, incredible hidden corners of Australia.

As always, please send us any Great Things you think we’ve missed.

See you out there,

002 Be cast for eternity onto salty Lake Ballard

005 Reach the oasis of Ormiston Gorge

011 Walk to Art in Melbourne

012 Stay the night in a light on Montague Island

013 Lose yourself in the bluest lagoon at Fitzroy Reef

014 Call the birds in on towering Mount Gower

015 Take a vow of silence in New Norcia

019 Rent your own island in the Mackerel Islands

020 Get dragged around with Sydney by Diva

022 Bathe in convict history at the Bogey Hole

023 Live the life of a keeper on Gabo Island

025 Paddle under a convict prison in Fremantle

026 Play catch with sharks on the Undersea Explorer

027 Lose your blues at Greens Pool

034 Find food for your soul at Flames of the Forest

035 Stride among the city of Gnomes

037 The Sound of Music at Mount Scoria

039 Fly to the ancient source of Australian art

041 See the other side of the rainbow Rainbow Serpent Tour

043 Stroll along the seabed with Seawalker

044 Find a home among the Banksias

045 Bathe in a boiling outback lake at Dalhousie Springs

047 Get on your soapbox Australian Billy Cart Champs

048 Travel in a clattering time machine the Afghan Express

049 Take tea with the Morning Tea Ladies on Tiwi Island

053 Fly in raft out on the North Johnstone River

056 Don’t fence me in at Cameron’s Corner

058 Proclaim yourself King for the night Kings Plains Castle

061 Imagine the land before maps on the Great North Road

062 Catch your own seafood platter at Black Point

063 Prepare to circle the wagons in Bendigo

065 Play polo in Banjo country at the Geebung Polo Match

066 Make your own wine at Penfolds

068 Walk among the dolomites in the Hastings Caves

071 Boogie-woogie on rails in the Blues Train

072 Rent your own cave in the Upper Blue Mountains

075 Find your way among the roses at Ashcombe

076 Bomb the Perry Sandhills on the banks of the Murray

077 Have the perfect family day at Parsley Bay

079 Crawl through a goldmine at Arltunga

081 Crawl through a convict tunnel in Clarence

082 Visit a country within a country Principality of Hutt River

083 Back your favourite cane toad on Magnetic Island

084 Twirl a brolly from a previous century Old Umbrella Shop

085 Delve into your immigrant past at the National Archives

091 Sail the postman’s run up the Hawkesbury

092 Join the outback pest war against the Yellow Crazy Ants

093 Roll with the pumpkins at Goomeri

094 Wander through the scarecrows in the vineyard

096 Get the best coffee in the galaxy at Tidbinbilla

097 Ride fly eat and learn on the Flying Camel Tour

099 Drink the world’s most expensive coffee