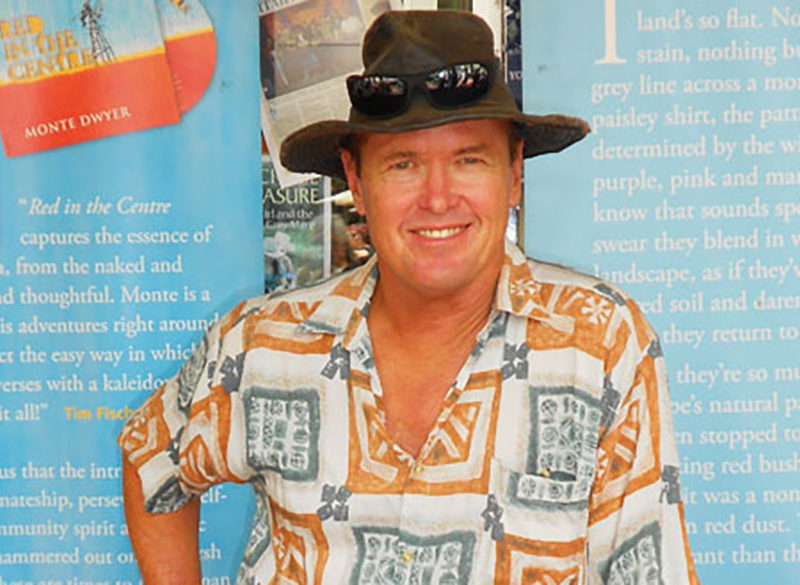 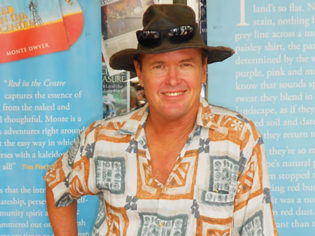 Ever wondered what happened to the Outback-loving weatherman, Monte Dwyer? Here Andrew Starkie tracks down the man who brought us the forecasts.

Monte Dwyer, former Channel Nine Today show weatherman, stands on a makeshift stage under a glowing K-Mart sign, deep in the stomach of a crowded shopping centre.  He wears dusty hiking boots and a wide-brimmed hat and strums a wooden guitar while singing his own bush ballads.

Occasionally he pauses to read from his books, stories gathered over years of endless looping around Australia.

It’s lunchtime Saturday at the Tamworth Country Music Festival and approximately half of the 50 or so plastic chairs stage front are occupied while most of the shopping centre crowd go about their business.  Much of Monte’s audience are grey nomads, retirees, who, like him, spend their time chasing the sun.

A younger group arrives midway through the performance and plonk down in the empty front row.

‘Where’s Fuzzy?’ one asks between songs, referring to the artist who plied his trade, obviously impressively, on the same stage the day before.

Monte ignores the question, however, it comes again, this time in a more demanding tone.

“Don’t know who you’re talking about, brother,” Monte politely deflects with an ironic grin before turning again to the more receptive nomads.  He eases into another tune about the thoughts of a man sitting alone on the banks of Lake Macquarie.

The performance is sincere and engaging, however, festival time is precious and some audience members rush off to the next show circled in their official guides.  Others hang around, hoping to see Fuzzy.

Monte’s journey, from the start

So, how did Monte get from there to here?  From well-paid TV weatherman and celebrity to nomadic wanderer and shopping centre performer?

To understand Monte’s journey, we need to go back to the start.

The next day, we meet at his busking spot on Peel Street, Tamworth’s hub.

Every available piece of concrete is occupied by wannabe future stars of Country as Cash, Cline and Keith Urban merge and float through the warm January air.

We pack the car and head for coffee, stopping every few metres so Monte can greet, hug, shake hands and chat with passersby.  He calls everyone ‘Brother’ or ‘Darl’.

This is the first meaningful thing I learn about Monte; he is a people person, able to mix effortlessly, with a blend of charm, cheek and genuine interest in others.

Oh, how he loves to talk

The next thing I learn is he loves to talk.  And talk.

We order and take a seat in the corner.  Save for thinning hair and lines that bracket his eyes and mouth, Monte has aged little since his days on morning television.  He looks pretty good for a bloke approaching his mid-fifties.

I invite Monte to tell his story. 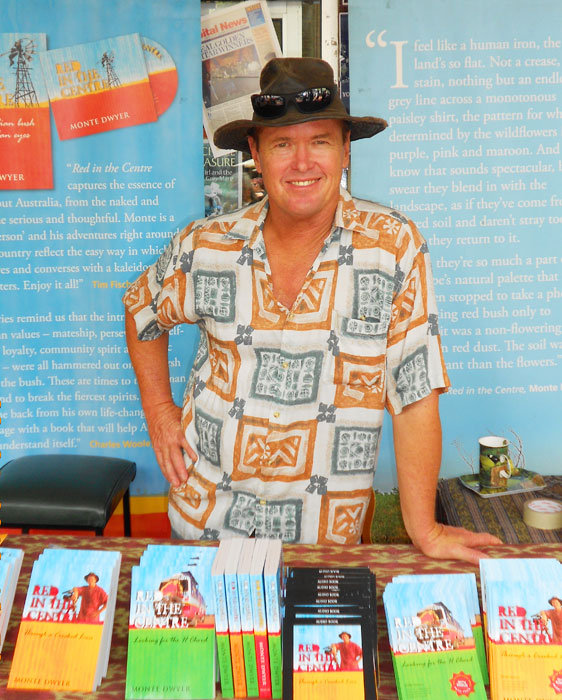 ‘Where do I start?’ he replies, puffing his cheeks and shaking his head as if confronted with a daunting mountain ascent.

Monte grew up in country NSW, ‘west of Newcastle’.  His father possessed an adventurous spirit, infused into his son on family expeditions into the Australian interior.  They shared a love of birds and a strong relationship was formed which continues today.

Not your average success story

Monte’s genetic restlessness saw him leave school and home early.  He qualified and worked as a psychiatric nurse. He ventured to Queensland, working as a deep sea fisherman, and to Asia, Europe and the United States.

In 1980, aged 21, Monte found himself in Darwin.  The tropical lifestyle of our most northern city suited and he laid some roots.  He pursued a theatrical dream by enrolling in a drama course which he hoped would fulfil creative urges.

Connections in the drama scene assisted Monte in landing his first weatherman role on Darwin’s ABC TV.  A gig he saw as an opportunity to display his talents.

He took every opportunity to display his ‘talents’

“I’d jazz things up a bit,” he says with a laugh. “I only had two minutes, so I’d sing the weather or present it as a race call.”

He launches into his finest track voice, “And we’re off and racing in the weather.  Darwin is out in front, expecting a fine and sunny 32….”

Monte was an instant hit with viewers and before long, his reputation reached south into the commercial TV offices of Sydney.  When the late Kerry Packer caught Monte’s performance one night, the Channel Nine boss pointed at the screen and demanded, “get that kid”.

We all need to earn a crust

But Monte took some convincing.  This great, brown land had called again and he was wandering once more, this time down the WA coast.  However, the need to earn a crust and the hope of more creatively satisfying opportunities in the glittering epicentre of TV land, swayed him.

So, Monte landed back in Sydney, his head filled with dramatic dreams and possibility.  Unfortunately, those dreams were dashed when ushered upstairs to the great man’s office.

Monte puffs his chest, lowers his range and delivers his best Packer: ‘Son, we loved your work in Darwin, but don’t think you’re doing that stuff down here.’

Oh well, take the good with the bad.

For over a decade from the early ’90s, Monte was the weatherman for the Today show.  For a while he enjoyed it, earning the respect of colleagues, including esteemed anchorman, Steve Liebmann, and ultimately the confidence of Upstairs, who eventually allowed him to take the weather ‘on the road’, and broadcast from far flung locations.  Monte relished bringing rural Australia into city lounge rooms.

Inevitably, frustration with his lot as weatherman set in.

‘I regretted a lack of creative allowance.  I spent years [at Channel Nine] running upstairs, asking for more.’

Monte’s constant nagging landed him a pilot program, based on a theatre sports, ad lib concept, but it was, in his own words, ‘disastrous’.  It was time to go.

‘My leaving was amicable,’ Monte reassures.

A short stint on Channel 7’s Sunrise followed, as well as time on the Gold Coast as ‘Queensland’s worst ever property developer’, due to a lack of interest in things financial.  He co-wrote a book about internet relationships with a woman he met online.

Everything can change, in a second

But life can turn in a few moments and when friend and journalist, Charles Wooley asked Monte to be his ‘man on the land’ for his Across Australia radio show, Monte saw it as his chance to sate his creative urges and restlessness.

He took off, figure-eighting the country, compiling stories about the lives of rural Australians and the problems they faced, including drought, flood, bushfire, bureaucracy, bankruptcy, and lack of resources and infrastructure.

“He ventured up bush tracks, to Indigenous townships, camel race meetings and pig farms to educate city listeners about life in the bush.  Monte drank cups of tea at farmhouse kitchen tables as usually reserved, thick-skinned cattlemen poured their hearts out.  He attracted, or was perhaps attracted to, drifters, those escaping city life or broken relationships, and others who found the Australian desert the ideal setting to clear their heads.

Monte had found his true calling.

A year of self discovery

He spent a year working with Wooley while writing his book, Red in the Centre – The Australian bush through urban eyes based on his experiences.

Monte now works for himself, traversing Australia in his van ‘Claude’ for six to eight months of the year, recording the stories of anyone who’s up for a chat. More books, DVDs and CDs have followed under the Red in the Centre project.  Monte’s daughter from a brief marriage during his time on the Today show, called Benino in his books to protect anonymity, joins him on school holidays.  As his father did for him, Monte passes onto her his love of travel and adventure.

Monte’s work provides him with the freedom and licence he has always craved.  Each day is a blank canvas waiting to be painted.  He also believes his work can bridge the gap between the city and the bush.

‘I tell stories that don’t get told,’ he states with a mixture of pride and frustration.  ‘Urban Australia neither knows nor cares about what’s going on in the bush!’

He blames mainstream media for much of this ignorance.

‘The media is pulling the wool over the eyes of the people.  It’s cherrypicking on particular issues and stories…. It puts twists on things.’

He believes television, in particular, is failing.

‘It has lost sight of what it does best – communicate, educate, illuminate.’

But it’s procrastinating politicians, their hands tied by red tape, who raise Monte’s ire most.  He calls for the abolition of state governments in order to eradicate unnecessary bureaucracy and he also believes Australia needs a uniform water policy as our population grows and demand for this most valuable of resource increases.  He doesn’t fancy his chances on either issue.

‘We’re lazy, indolent and we’re f-g it up,’ he declares, referring to our fragile environment.

I ask Monte what he has learnt about himself since he hit the road and he pauses, again at the base of that metaphorical mountain.

‘More and more, as I get older, it’s about space.  I need it.  It’s serenity…. A personality will expand to fill a space.’

The wide open road has provided opportunity for introspection.

‘I know a lot of my demons, but I still make a lot of mistakes… but I’d rather fail doing what I wanna do.’

By now, cafe staff are mopping floors and I’m running out of space in my notepad.

What have you learnt about other people?

‘Country people are less obsessed with money and belongings.’

Do you love Australia?

Later in the festival I drop by his busking spot and ask Monte if he’s living the dream.  He shrugs, screws up his face and offers: ‘Maybe.  Maybe I’m just mad.’

Come the Dry season, Monte will push north again to flog Red in the Centre at Darwin’s markets.  Long term, he’ll continue to wander, meet people and write about them.