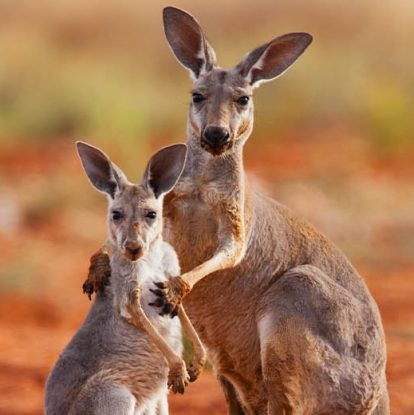 Where to see Australia's unique wildlife

Australia boasts a weird and wonderful menagerie of creatures on land, sea and air.

One half of the national coat of arms (the other is the emu), the kangaroo is one of the country’s most celebrated animals. There are four different species of kangaroo: The Red; Antilopine; Eastern Grey; and Western Grey. The Red holds the distinction of being the world’s largest marsupial; some males stand as tall as six feet and weigh in at 200 pounds.

Fast fact: There are more kangaroos than humans in Australia (roughly 50 million versus 25.7 million), with an estimated 15.8 million red kangaroos alone.

Where to see them: You’ll find kangaroos all over Australia. They’re social creatures, so chances are if you see one there are more close by. They rest during the heat of the day, so the best time to catch sight of them is at dawn and dusk. 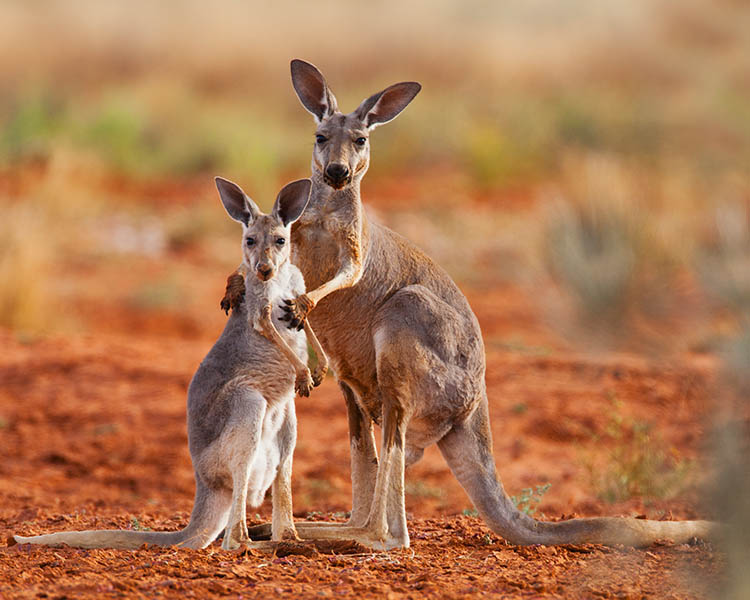 The kangaroo is one of Australia’s most celebrated animals.

When it comes to the Aussie animal most visitors want to tick off their list, chances are it’s the koala. This impossibly cute tree-dwelling marsupial mammal survives on a diet exclusively made up of eucalyptus leaves. The trees are also their home, with koalas spending up to 19 hours a day sleeping in them before waking up to feed at night, making them largely nocturnal. While koalas have a pouch like kangaroos, they are more closely related to the wombat.

Fast fact: While they look all chubby and cuddly, koalas have seriously sharp claws and when threatened can run as fast as a rabbit.

Where to see them: Due to the fact that they spend most of their time up trees, koalas can be elusive to spot in the wild. Keep an eye out for them along the Great Ocean Road and on Raymond Island in Victoria, and around Port Stephens and Port Macquarie in New South Wales. 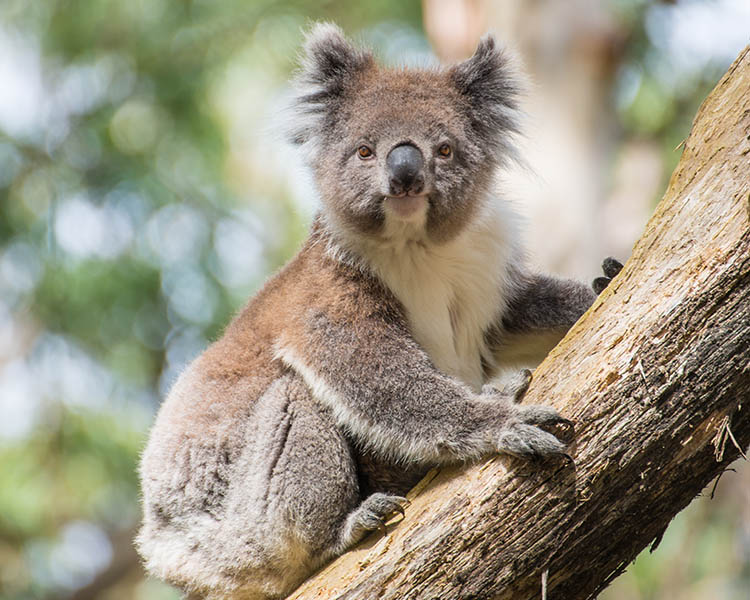 Koalas survive on a diet exclusively made up of eucalyptus leaves.

These chubby creatures live in burrows and emerge at night to feast on a diet of grasses, bark and roots. Consisting of three species – the Common Wombat, the Northern Hairy-Nosed Wombat and the Southern Hairy-Nosed Wombat – wombats are an evolutionary wonder: they have a pouch like other marsupials but it faces backwards so that it doesn’t fill with dirt when they are digging. And its rump consists mostly of cartilage so that when it retreats headfirst into its hole it is almost impossible for predators to get a grip on.

Fast fact: Wombats’ poop is shaped like a cube. The theory is that as they mark their territory by defecating, the shape stops it from rolling away.

Where to see them: Wombats thrive in cool, damp environments, so you have a good chance of spotting them in places like Cradle Mountain-Lake St Clair National Park and Maria Island in Tasmania, Wilsons Promontory National Park in Victoria, and the Southern Highlands, less than two hours from Sydney. 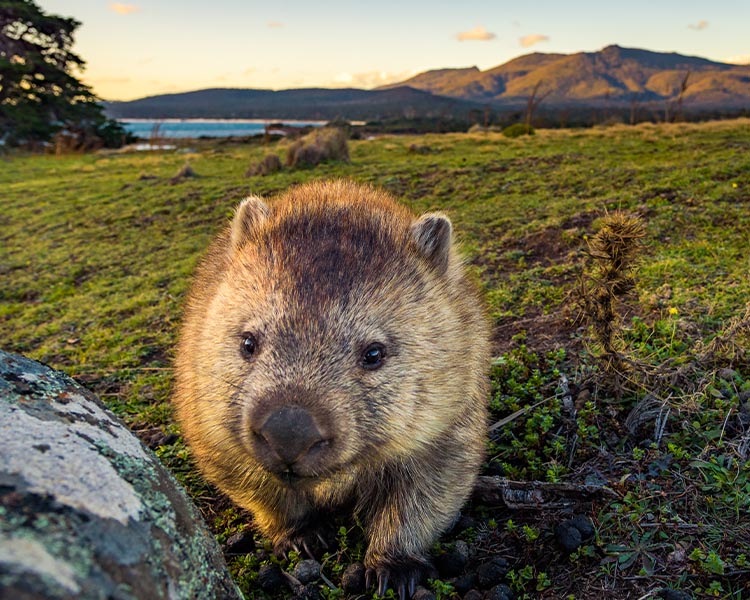 Wombats live in burrows and emerge at night to feast on a diet of grasses, bark and roots.

When you are out and about at night in Australia, whether in the heart of Sydney or in the wilds of Freycinet National Park in Tasmania, chances are you will catch a glimpse of either a Common Brushtail Possum or a Common Ringtail Possum, the most prolific of Australia’s 23 species of possums.

With their soft fur and sweet faces, possums are one of the easiest marsupials to spot as they are quite adventurous in the pursuit of food. And if you can’t see them, you’re sure to hear them; researchers have identified at least 18 different sounds made by possums including screeching, hissing and grunting.

Fast fact: Both brushtail and ringtail possums have prehensile tails, which they use as a type of hand to cling to trees and carry things.

Where to see them: Brushtail and ringtail possums are found all over the country and are easy to spot when feeding at night – just look up. 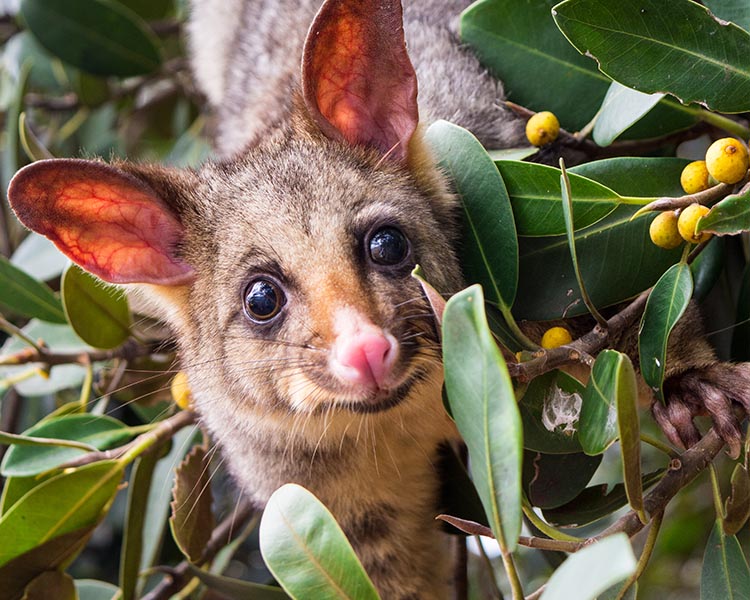 Possums are one of the easiest marsupials to spot.

A marsupial cousin of the kangaroo, wallabies are widely found across the country. Smaller than kangaroos, there are some 30 species of wallaby in Australia including the Rock Wallaby, Swamp Wallaby and the Tammar Wallaby, all of which hop to get around, tend to be more active at dawn and dusk, and carry their young in a pouch. Unlike kangaroos, however, wallabies are solitary creatures.

Fast fact: If a wallaby becomes pregnant while she still has a joey (baby) in her pouch, she can pause the gestation of the new embryo until its sibling has vacated the space.

Where to see them: Wallabies are widespread and plentiful, which means you are in with a good chance of seeing these delightful little creatures in any of Australia’s abundant National Parks. 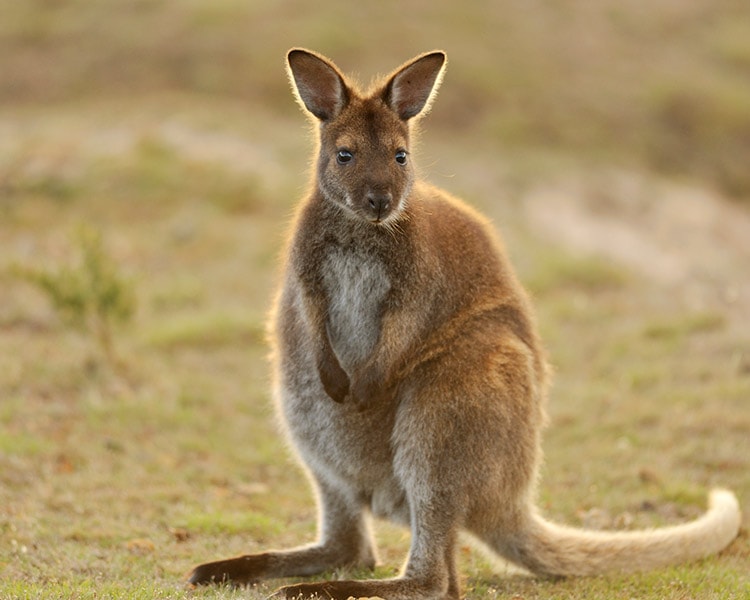 Wallabies are marsupial cousins of the kangaroo.

Australia is home to abundant birdlife, but none is more genuinely wondrous than the kookaburra. Also known as the Laughing Kookaburra, this Kingfisher is famous for its loud and clear call that sounds like a hearty belly laugh but is actually a method to warn other birds off its territory.

Fast fact: Kookaburras are believed to pair for life, so when you see one bird its mate will most likely be nearby.

Where to see them: Found predominantly on the East Coast, you will usually hear them before you see them. 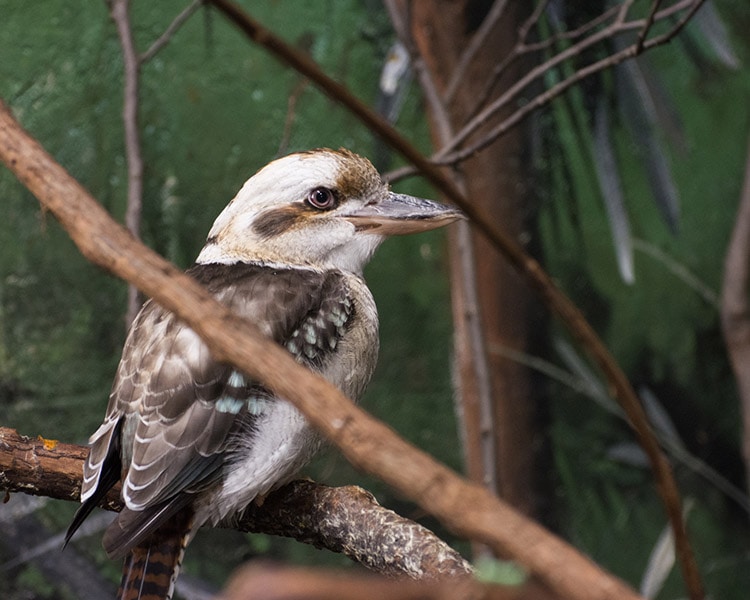 Kookaburras are famous for their loud and clear call that sounds.

Found exclusively on the island state from which it gets its name, this carnivorous marsupial is actually a lot like its Looney Tunes cartoon persona, a snarling, irascible whirlwind of teeth and attitude. With a vocabulary of growls, grunts and snarls, they are vociferous (and slightly vicious) when threatened or protecting their food.

Fast fact: Further cementing its reputation, the Tasmanian Devil has the most powerful bite of any animal in the world based on its size.

Where to see them: As the devil is nocturnal, it is difficult to see in the wild; instead visit the Tasmanian Devil Conservation Park in Taranna, an easy drive from Hobart, Bonorong Wildlife Sanctuary, north of Hobart, or Devils @ Cradle Wildlife Park near Cradle Mountain National Park. 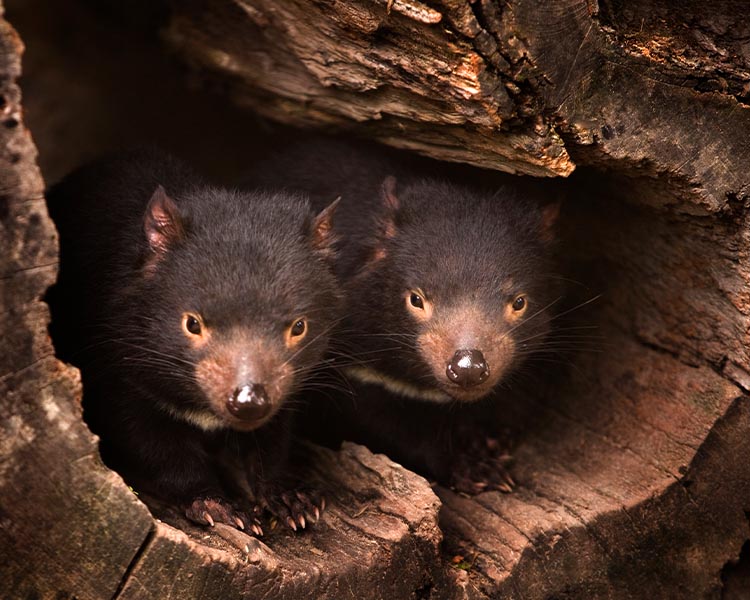 Tasmanian Devils are found exclusively on the island state from which it gets its name.

Also watch out for…

This little egg-laying mammal is covered in sharp spikes and eats a diet largely made up of ants, hence its alternative name, the spiny anteater. They thrive in all manner of habitats, too. 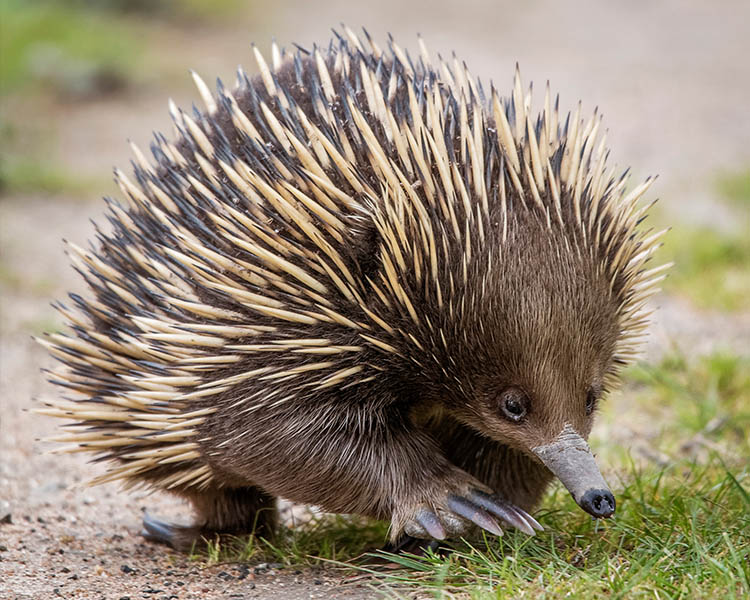 The echidna eats a diet largely made up of ants.

The other half of the coat of arms, this flightless bird is the second biggest in the world after the ostrich; they can grow up to 6.5 feet tall. You’ll find them across mainland Australia. 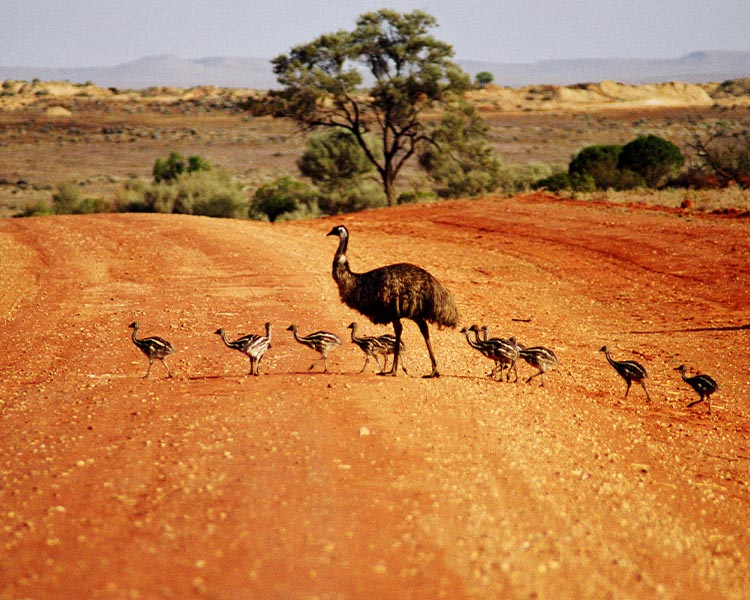 Emus are the second biggest birds in the world after the ostrich.

One of only two egg-laying mammals in the world (the other is the echidna), the platypus has a ducklike bill, webbed feet, is covered in fur and sleeps 14 hours a day on average. 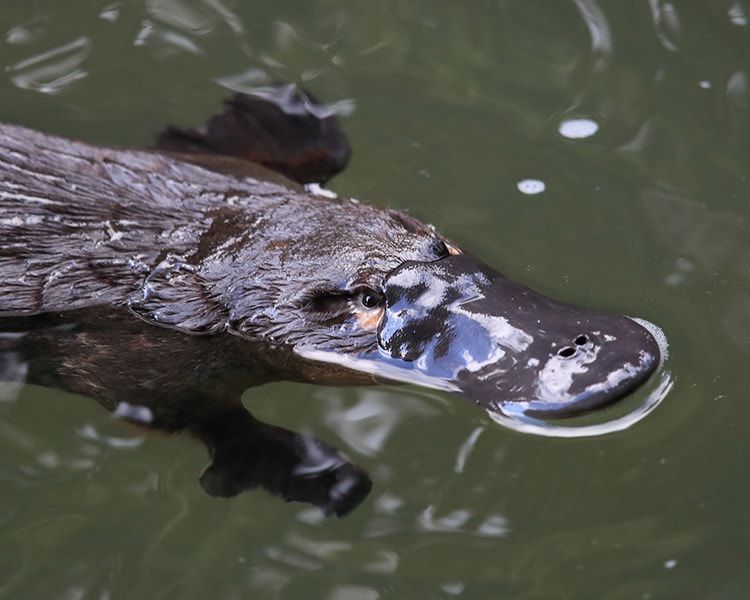 One of only two egg-laying mammals in the world.

Australia’s native wild dog, dingoes are found throughout the mainland states, including in the Northern Territory, and are known for their characteristic howl. 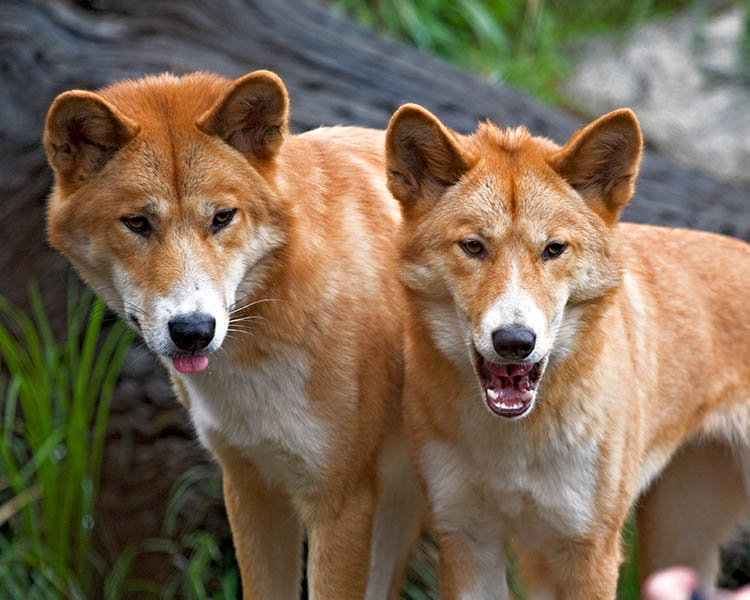 Dingoes are found throughout the mainland states.

You’ll hear these cheeky native birds screeching loudly during the summer months as they dart from tree to tree or hang upside down from electricity wires. 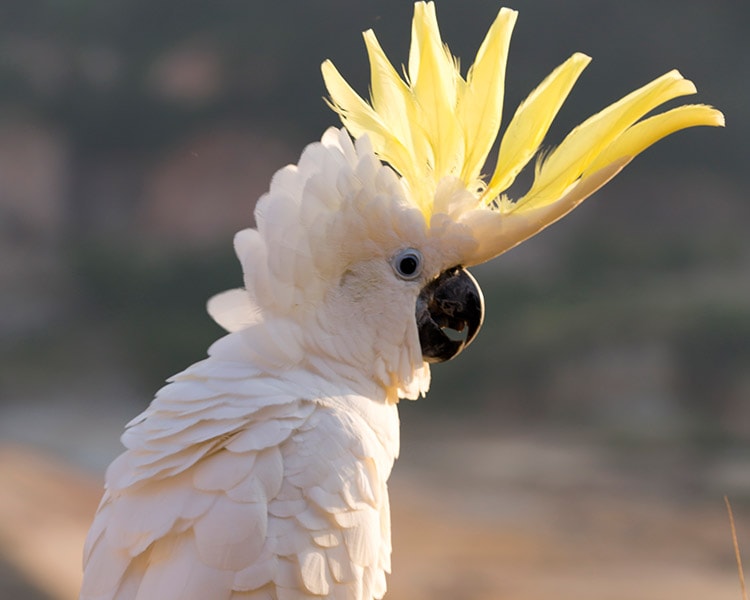 Keep your eyes peeled for a Sulphur Crested Cockatoo.

Native to Rottnest Island in Western Australia, the cuddly quokka is quite possibly Australia’s happiest marsupial, whose delightful grin has featured in many a cute selfie and social media post. 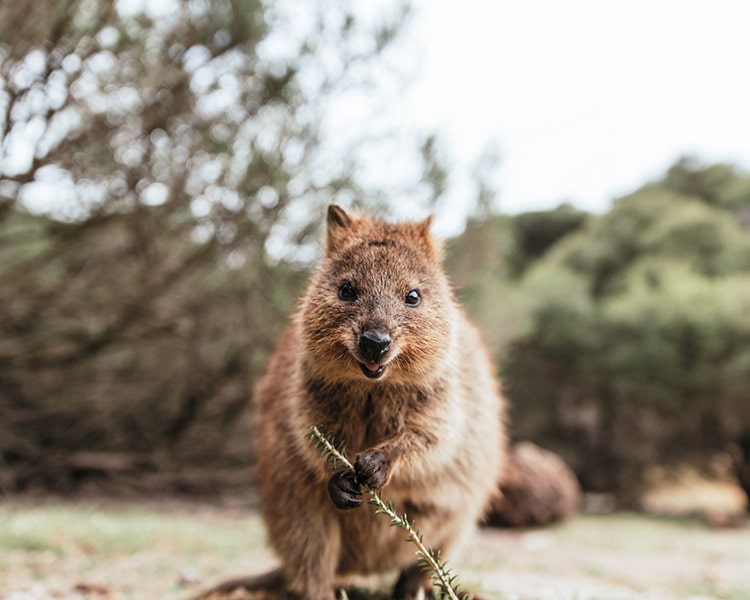 The cuddly quokka is quite possibly Australia’s happiest marsupial.

Enjoy the magic of VIVID Sydney from your balcony