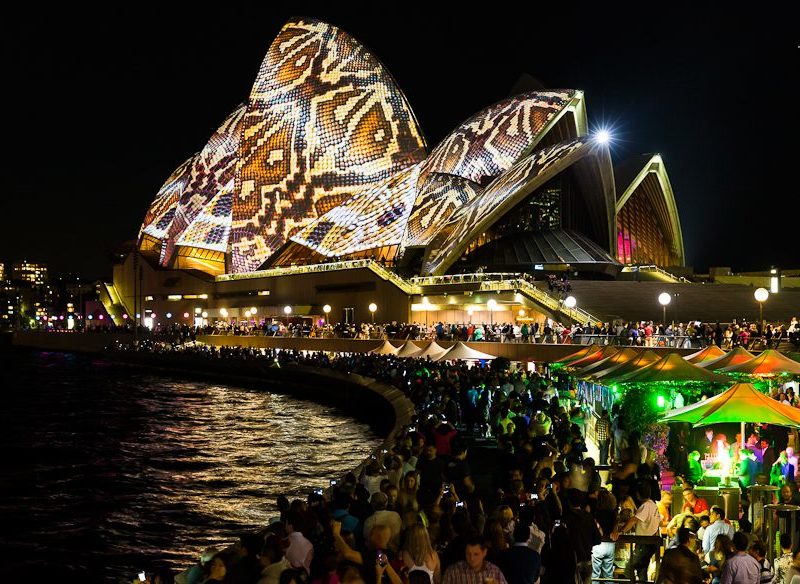 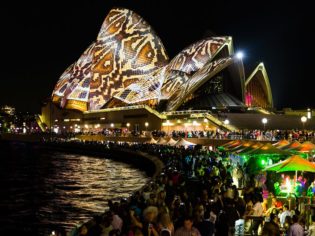 Vivid LIVE at the Sydney Opera House is more radiant than ever with big name music acts, such as Morrissey and Sufjan Stevens, and light shows in new and quite unexpected places…

Watching the Lighting of the Sails – when the outside of the Opera House is transformed in a massive shell-shaped slide screen – has become one of the must-see moments of the annual Vivid Festival of light, music and ideas, but the nightly light show is really just the tip of brightly-lit iceberg, according to Vivid LIVE curator, Ben Marshall.

“There’s a lot of new things happening this year,” says Marshall. “We have light projections showing inside the House for the first time, behind-the-scenes exhibitions, pop-up bars in places you’d never expect, a talk series, club nights, a large scale outdoor event and Dress Up Attack, an arts and music festival for both adults and kids.”

Sure to be a hit are the new Vivid Live backstage tours where you can go behind the scenes to watch the set up and see where – and how – the lightshow magic happens. Highlights include visits to the recording studio, and depending on which tour you’re on, you will end the tour – which includes dinner and wine in the Green Room (where the stars eat and drink) – with a once in a lifetime opportunity to see a very up close and personal lighting of the sails from the podium.

“But what really makes this year different is that we are taking over the house and flooding it with contemporary music during Vivid LIVE. It’s the only time of the year that all the venues in the Opera House will be showcasing one art form,” says Marshall.

Marshall rattles off a very impressive list of talent that’s appearing this year, including legendary singer Morrissey – you had to enter a ballot to get a seat – the genre-bending American indie pop/folk singer Sufjan Stevens, Aussie superstar Daniel Johns performing his first ever solo show, American art rock band TV on the Radio, UK electro artist Squarepusher and up and coming Aussie band The Preatures among them.

But it’s American musician Bill Callahan that Marshall thinks will surprise people the most. “He’s been around for almost 30 years, but he’s really starting to make an impact now. I think he will be the Leonard Cohen of his generation and this is a great chance to see him perform”, says Marshall.