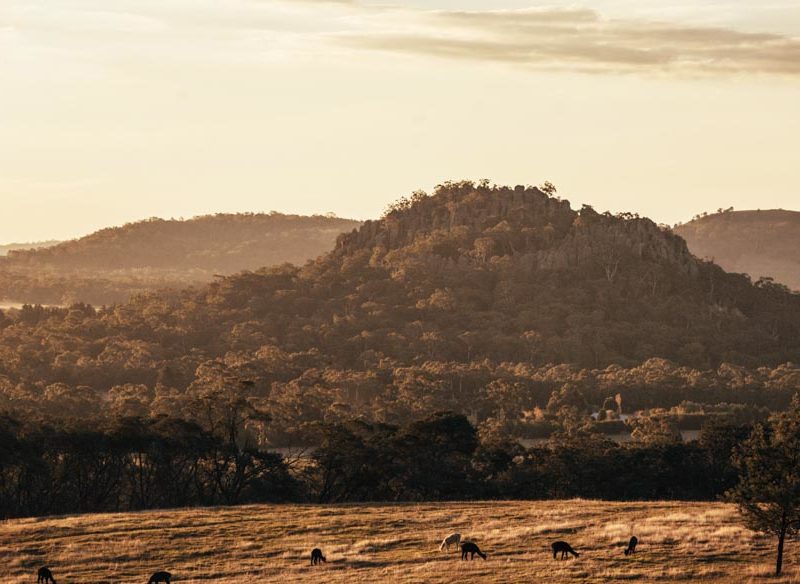 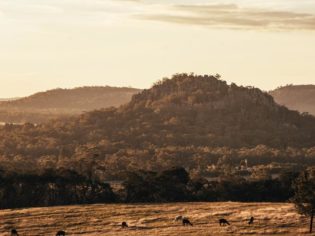 Jocelyn Pride discovers that trekking the Macedon Ranges’ mystical Hanging Rock with a llama is good for your soul. No, really…

Huge brown eyes with movie star lashes look straight into mine and his banana-shaped fluffy ears twitch back and forth as I make soft cooing sounds.

It’s love at first sight. A perfect way to start a 24-hour relationship… with a llama.

Domesticated by the Incas thousands of years ago, llamas are one of the oldest animals on the planet. Known as the dolphins of the land, these camelids are whip smart, full of personality and easy to train, as Mark Brindley of Hanging Rock Llama Treks discovered. By saving a llama’s life, he changed his.

“When my partner brought home a day-old orphaned cria (baby llama) with a hole in its heart from her veterinarian clinic, I was hooked,” says Mark, a retired aircraft engineer turned llama farmer. “Although Yoda only lived six months, she opened me to a new world.”

Jaro stands patiently as I learn the art of llama handling.

“Before you ask, spit happens,” says Mark with a playful chuckle. “But don’t worry, it’s rare and only a llama to llama thing.”

The thought of being in the middle of a llama drama and sprayed with green slime is a tad off-putting, however Jaro and his mates already have the herd hierarchy worked out.

“Just make sure you give them their own space.”

After weighing each saddle-bag loaded with our camping gear, food and wine, clothing, and llama essentials like a pooper scooper, tether ropes and ‘llama lollies’ (pellets), we head to Hanging Rock Reserve.

Leading a llama is like taking an oversized well-trained dog for a walk, except I soon find they only have two speeds – stop and llama pace. Each step Jaro takes is slow, deliberate and strong.

It’s easy to see why these sure-footed, well-natured animals are revered as pack animals. Even weighing in at 160 kilograms they’re kind on the environment.

“A llama leaves less of a footprint than our hiking boots,” says Mark.

We meander the labyrinth of undulating trails lined with peppermint and manna gums around Australia’s ‘second’ rock formed six million years ago when lava oozed through a vent in the Earth’s surface.

Immortalised in literature, Hanging Rock is as evocative today as it was in Joan Lindsay’s novel and Peter Weir’s film Picnic at Hanging Rock, the haunting tale of the disappearance of a group of school girls here on Valentine’s Day in 1900.

Jaro occasionally cuddles into my neck and sniffs my pockets for ‘llama lollies’. Chris, my travel companion is envious. She doesn’t bond as quickly with Warrego, the tallest and most aloof of the trio. “Llamas can be more like cats than dogs,” says Mark.

For afternoon tea we lazily snack on chocolate brownies and banana cake, sipping tea while the llamas chomp on grass and snatch mouthfuls of pine needles.

As camping isn’t permitted in the reserve, we load the llamas onto a horse float and drive half-an-hour to a ‘pet friendly’ camping ground in the tiny village of Blackwood on the edge of Lerderderg State Park.

With great hilarity and wide-eyed llamas watching on, we manage to pitch the tents before darkness shrouds us.

As we snuggle into the sleeping bags, our four-legged friends kush down (sit) as sentinels behind the tents. Their hums and snuffles are like a lullaby and I’m asleep within seconds.

Our six-kilometre hike the following morning is a challenge. Narrow tracks criss-cross the old gold mining trails. This is new territory for Jaro but nothing fazes him. He carefully picks our path, up and down the rocky hills – confident, steady, grounded. He has my complete trust.

Instead of my usual hurried pace, I’m totally in the moment. I feel the breeze touch my face, listen to the swish of the leaves and each note of a kookaburra’s laughter.

Jaro’s humming becomes my ‘om’. It sure beats a colouring book.

Getting there: Hanging Rock is a 60-minute drive north-west of Melbourne.

Playing there: Mark offers a number of llama experiences ranging from kids’ parties on his farm to day hikes along a rail trail with a pub lunch to overnight camping treks. The price for the overnight experience is $130 per person including camping gear, food, wine and lollies for the llamas. hangingrockllama.com.au

Staying there: If you don’t fancy sleeping in a tent, ‘The Caboose’ at Hanging Rock Reserve is a beautifully restored railway carriage (sleeps two). Contact Garry and Kate Marks on 0418394984.

Where to Eat, Shop and Stay in Trentham, Victoria

Daylesford's little sister Trentham has a gourmet treasure trail all of its own, number 76 on Australian Traveller's '100 amazing places you haven't b...

Enjoy the best of Kyneton’s food, bars and coffee

The best food, bars and coffee in Kyneton, Victoria, number #94 on Australian Traveller's '100 amazing places you haven't been to yet'. Nominated by:...

100 Greatest Holidays of Australia: #56 (tie) hide out for a luxe weekend in spa country

Score: 8.13 The third recipient of spot #56 is Daylesford, a town with two sides: the decadent spa scene, and the decadent food scene. You’ll find...