A first-timer's guide to the Coral Coast, WA 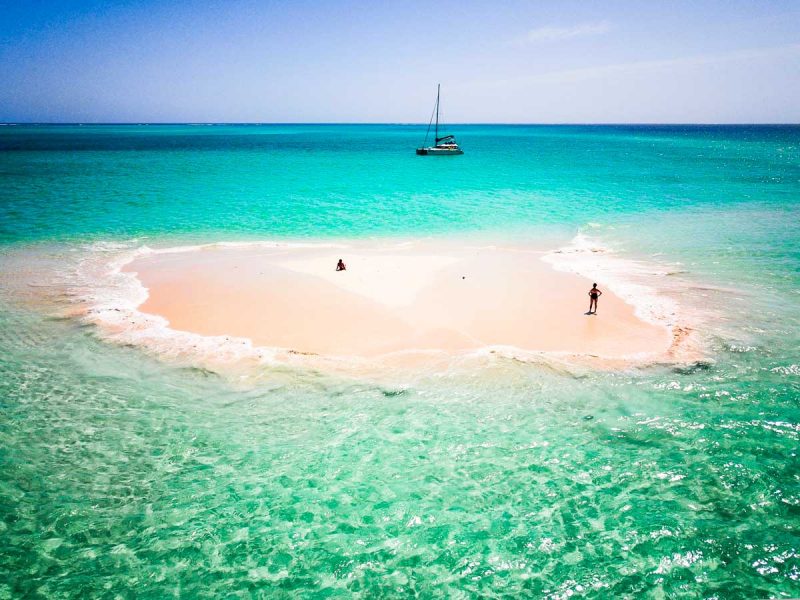 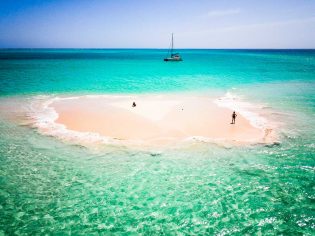 The Coral Coast is home to some of Australia’s most iconic attractions.

The Coral Coast Highway is like the writhing body of a serpent as it makes its way from Cervantes, two hours north of Perth, along 1100 kilometres of coastline to World-Heritage-listed Ningaloo Reef. While there is surf, sun and sea on tap on the Coral Coast, this incredible corner of the country is also home to some of Australia’s most iconic attractions. Swimming with Ningaloo’s Big Three – whale sharks, humpback whales and manta rays – is obviously on top of the to-do list. But it’s also considered compulsory to walk through fields blanketed with everlasting wildflowers, watch the light paint the Pinnacles in a buttery hue, hike through ancient gorges and simply tumble off white sandy beaches into those turquoise waters. Here, find the gems you need to have on your itinerary.

Experience the wonders of Wooramel while bunkered down in a rustic eco- cabin tent at this low-impact riverfront campground located 120 kilometres south of Carnarvon. Activities here are based around bushwalking, birdwatching and basking in the naturally heated artesian bore baths.

Perched on the Ningaloo Coast between Coral Bay and Exmouth is where you will find Bullara Station Stay. Choose between the renovated Shearers Lodge or the Outcamp, private cottages and luxury safari huts that are dotted around the property, which offers an authentic station stay experience. 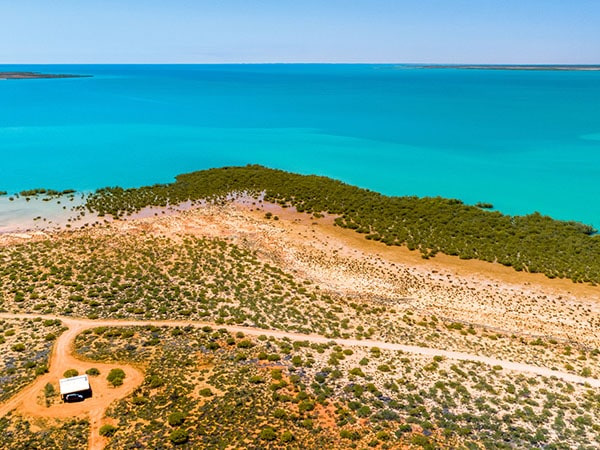 Stay onboard the luxurious sailing catamaran, Shore Thing, during an overnight sailing adventure from Coral Bay that will enable you to experience world-class snorkelling and scuba diving by day and unwind onboard under a star-spangled ceiling by night. 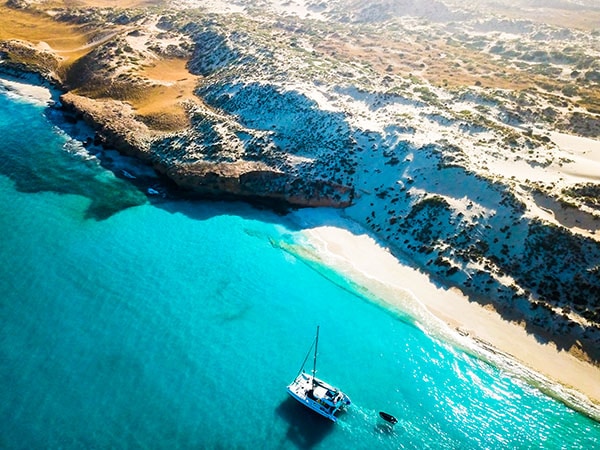 Cervantes is the gateway to the Pinnacles Desert. In addition to that iconic landscape of limestone spires, Cervantes whispers ‘come hither’ for its lesser-known Lake Thetis, one of only five sites in WA that feature thrombolites, believed to be more than 3000 years old.

Kalbarri is known for its rugged landscapes and national parks. It’s where you will find flamingo-pink Hutt Lagoon, see wildflowers, experience Indigenous art, and explore inland and coastal gorges that have been chiselled by the elements over thousands of years. 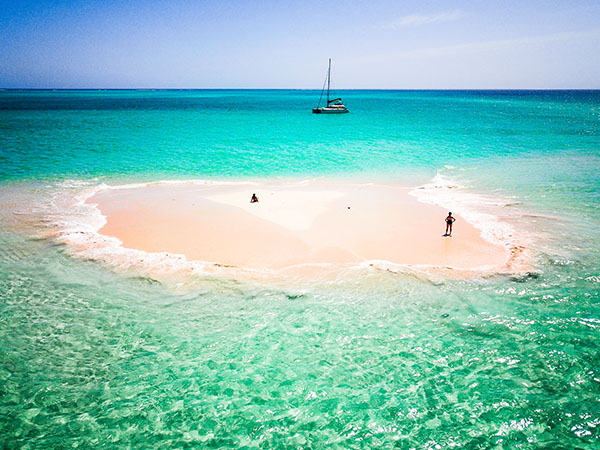 Visiting Ningaloo is a given, but you should also set aside a few days to stay in Carnarvon in between exploring the Ningaloo Coast World Heritage Area. Surf at Gnaraloo, snorkel at Quobba, go windsurfing at Red Bluff and hike into the hinterland to picnic at Rocky Pool.

While visitors from around the world base themselves in Exmouth to swim with whale sharks at Ningaloo Marine Park, this top Aussie town to visit in 2021 (as voted by Wotif) is also a great jumping-off point for the lesser-known Shothole Canyon and Charles Knife Canyon in Cape Range National Park.

Geraldton, located about four and a half hours’ drive north of Perth, has reinvented itself in recent years as a contemporary coastal hub with quirky cafes, hip boutiques, street art and galleries. Factor in a visit to the Yamatji Art Gallery to learn about local Indigenous culture. 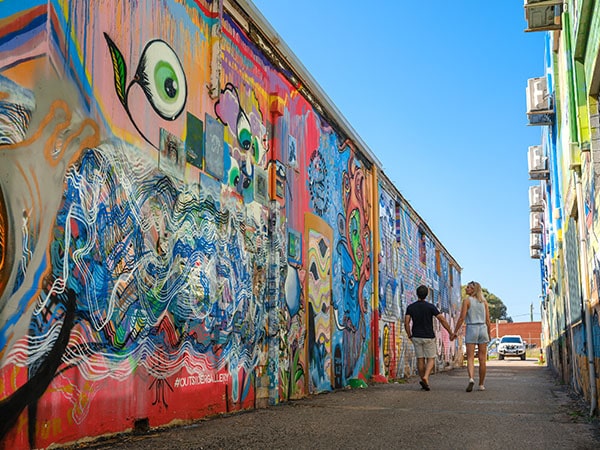 Geraldton gets its groove on. (Image: Tourism Western Australia)

The Old Man & the Sea

Catch the lift to Level 3 of The Gerald Apartment Hotel to get your groove on while in Geraldton. This rooftop bar is where the cool kids hang to watch the sun sink over the horizon while enjoying chicken schnitties and schooeys of tap beer.

This totally of-its-place space is an outdoor seafood restaurant and brewery in Kalbarri where you can enjoy fresh local West Australian fish and chips and beautifully crafted beer. The thing to do here is to sit around the communal campfire under gum trees flickering with fairy lights.

Western rock lobster is the specialty at the Lobster Shack, a business run by the trailblazing Thompson family who have been fishing on the Coral Coast since the 1960s. Try this prized crustacean grilled with garlic butter or in the signature lobster roll. 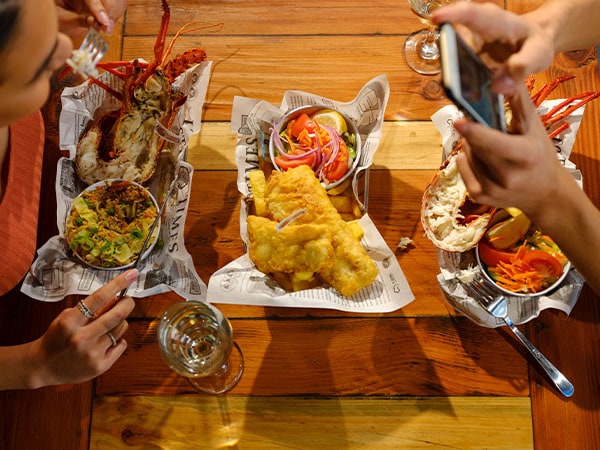 Top things to do

Obviously it’s swim with whale sharks, but instead of being just another camera-toting tourist, be a conscious traveller and volunteer to prevent whale shark extinction by taking part in a citizen science project that helps plug the gaps in marine biologist Brad Norman’s research.

Embrace your vertigo on a stroll along two 100-metre-high lookouts that jut out like open drawers beyond the rim of Murchison Gorge. The cantilevered lookouts, located on the traditional lands of the Indigenous Nanda peoples, are anchored into 400-million-year-old sandstone. 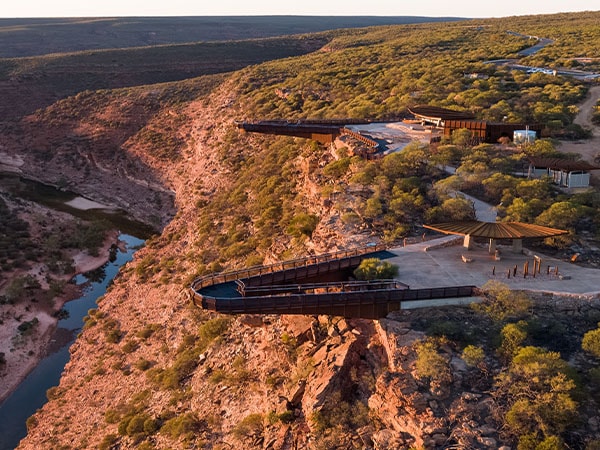 Old People Talking tells the stories of the Gascoyne’s Traditional Owners in their own words and language. A replica of a 33,000-year-old shell necklace, images and artefacts are highlights of the permanent exhibition at the Gwoonwardu Mia Aboriginal Heritage and Cultural Centre in Carnarvon.