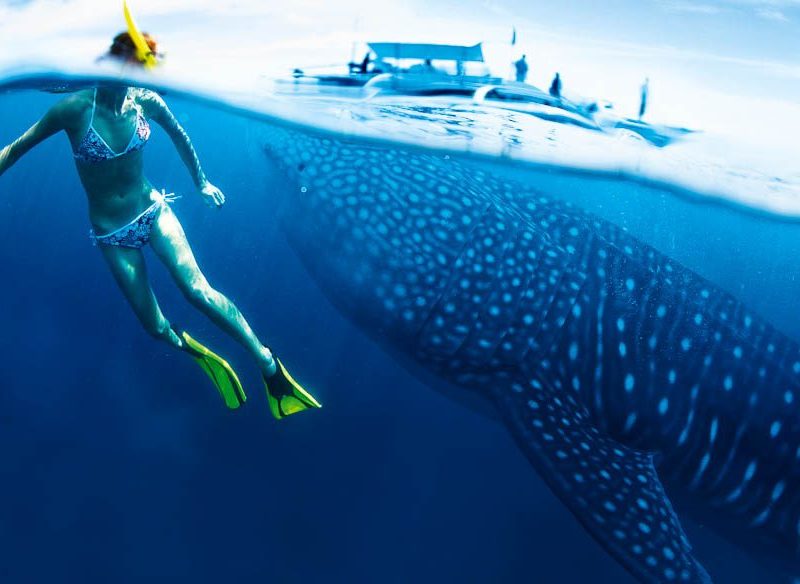 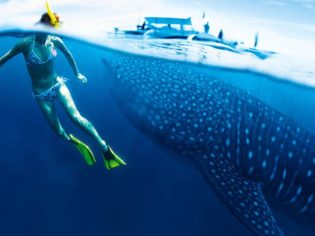 If swimming with whale sharks isn’t on your outback bucket list, well then you’re missing out, says Daniel Scott.

Just being here on this sparkling winter morning would be enough, cruising from Tandabiddy boat ramp through a break in one of the largest fringing reefs in the world. And Ningaloo Reef is right here in Australia, running for 300 kilometres along the continent’s north-western tip and enshrined on the World Heritage List since 2011 for its outstanding natural beauty and biological diversity.

After diving and snorkelling on its coral forests for the past three – unforgettable – days with Sail Ningaloo, I cannot imagine there being a healthier reef system anywhere on our planet. Nor one that draws such abundant and varied marine life. It’s impossible to count the number of tropical fish I’ve seen while snorkelling, decorated in luminous, electric colours that would outshine any neon-lit Tokyo street. While diving, I’ve loped along with a 90-year old loggerhead turtle, tried to keep up with cruising reef sharks and made awkward attempts to fly in formation alongside manta rays with five-metre wingspans.

But today, along with about 20 other passengers, I am about to realise a long-held dream: to swim with the biggest fish in the sea. Whale sharks: animals that can grow to 12 metres in length and weigh 21 tonnes and are yet among the most difficult of creatures to find on the planet. It’s another of Ningaloo Reef’s miracles that whale sharks are drawn, in significant numbers, to its plankton-enriched waters, between April and July every year.

Yesterday, on a scenic flight, I saw four of these behemoths in the deeper, darker Indian Ocean outside the reef, their spotted patterns clearly visible from 300 metres above. Now, my pilot Tiffany is up in the sky again, acting as a spotter for our boat, Kings Ningaloo Reef Tour’s The Magellan.

As we are briefed by our young whale shark guides, the sense of anticipation builds.

“Once we’ve located a whale shark,” my guide Nadine tells our group of eight snorkellers, “the skipper will get the boat ahead of it. Then I will jump in, find it underwater and hold my arm up to indicate which way it is travelling. Then…”

Before she has time to finish, the cry has gone up and The Magellan is powering toward a nearby sighting.

“Get in one by one,” says Nadine shuffling to the back of the boat in her fins, “and fan out on either side in two groups of four. And please remember to stay three metres away from the…”

Nadine is in and swimming like an Olympian in the open ocean. I’ve got the sinking feeling and thumping pulse I always get when my sense of adventure is about to propel me into a situation my comfort-loving self would never consider.

Nadine has stopped and pumped her arm above the swell.

I take a deep half-breath, step onto the tailboard and stride off the boat. There’s bubbles and white water everywhere.

Strewth, I think, when the commotion clears, this water must be 80 metres deep. Before I can dwell on that, I catch a flash of Nadine’s yellow fins and push off towards her. Then I see it, an immense grey blur off to Nadine’s right. A second later it is a huge flat head proceeded by an outsized mouth, with natural lips that would put collagen out of business, heading straight toward me.

Getting run-down by a sub-aquatic double-decker bus wasn’t in my script. I gulp a snorkel full of ocean and fin backwards, sideways, anyways I can to get out of its road. It’s still coming toward me, the feeding whale shark’s mouth formed into an ‘O’, like one of those cool kids at school that blew perfect smoke rings.

Finally, I’m clear. I breathe easier and take in those markings that I’d seen from the air. Hundreds of off-white dots adorn its head and run in symmetrical patterns down its body. As it flashes past, I see the well-defined ridges of its back leading down to its vertical tail fin.

It takes 15 seconds for my first whale shark, an adolescent male that’s a mere four-and-a-half metres long and has the speed and grace of a marine cheetah, to be gone. As I flounder after it, it pulls away with a dismissive flap of its tail, leaving eight snorkellers gurgling like excited babies into their snorkels.

With careful manoeuvring, The Magellan drops us twice more into the path of this speedy shark. Later, we make the more relaxing acquaintance of a bigger, slower-moving female. But it is those first moments, described by shark expert Valerie Taylor as being like watching “a tanker emerging from the fog” that will remain etched in my brain as the greatest wildlife encounter of my life.

• Fly from Perth to Exmouth (Learmonth Airport) and head north to Exmouth (20 minutes) or south to Coral Bay (30 minutes). Both Coral Bay and Exmouth offer whale shark tours. You are more likely to swim with whale sharks at Exmouth (but only just – sightings at Coral Bay still happen at least 80 per cent of the time). Coral Bay is better known for its manta ray swims.

• If you’re a luxury lodge fiend, glamping property Sal Salis in the Cape Range National Park is the only place to stay. Often there is a three-night package including a whale shark experience, for around $2660 per person, twin share.

• We stayed onboard Sail Ningaloo; they operate three, five and nine-day Ningaloo Reef Tours between March and December. Prices begin from $1700 for a three-night tour in a deluxe cabin including all meals and non-alcoholic drinks, transfers from Coral Bay and equipment. However, you won’t see whale sharks with Sail Ningaloo – that’s a day experience offered through other operators (see ‘Playing There’).

• We swam with Kings Ningaloo Reef Tours, but there are several operators to choose from: seven at Exmouth and one at Coral Bay. Prices range from $385–$400 per person. Most offer a return ticket for the next day if the whale sharks don’t show up.

MORE: Swim with a real shark – ‘The Great White Truth About Cage Diving With Sharks‘ 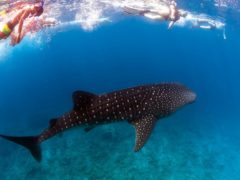 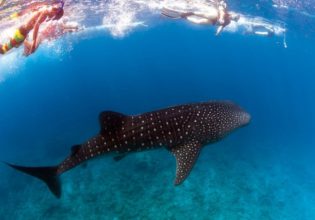 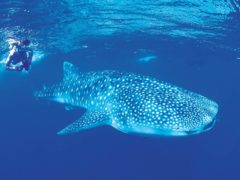 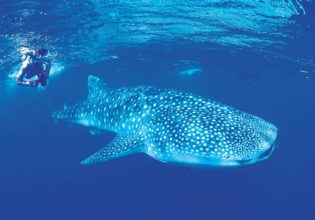