Salty Wings: the duo behind those epic WA photos 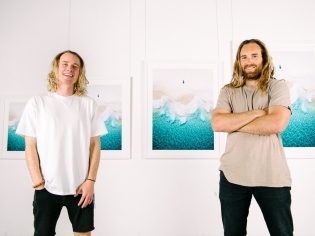 Meet the fine art photographers who, with a drone and a vision, started the Salty Wings brand by populating Instagram with a visual love letter to their home state.

Imagine a GoPro being held in the talons of a majestic sea eagle soaring high above the coastline and you will understand the inspiration behind the Salty Wings brand. Former Claremont locals Jampal Williamson and Michael Goetze started the @saltywings Instagram account in 2016, taking their followers hundreds of feet above the Earth to capture rich landscapes of red dirt, white sands and navy seas. And, just like the sea eagle, the account took off, transcending into an online gallery selling abstract and alluring images taken from above. 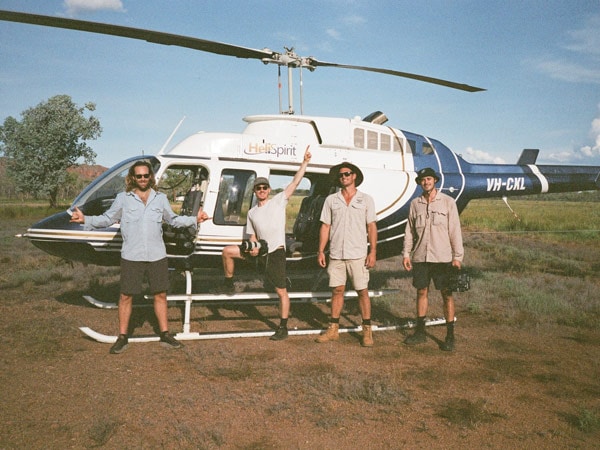 “When we first started out, eight years ago, drone photography was not common and when friends or followers asked how we got the footage we told them we had trained a sea eagle to take the images for us with a Go-Pro. The sea eagle is definitely our spirit animal and was the inspiration for the brand. We also borrowed from the term ‘salty sea dogs’ used to describe fisherman,” explains Goetze.

As early adopters of drones, which up until about 2013 had mainly been used by the military, for security and aerial mapping, Salty Wings has inspired its 161,000 followers to look at the Western Australian coastline a little differently.

“I grew up in Claremont, which is on the Swan River between Perth and Fremantle. The beach was a five-minute drive and every holiday was spent either at Rottnest or down south. My childhood was spent becoming very familiar with WA’s coastlines and beaches at eye level. Since then, we have travelled more than 20,000 kilometres to shine a light on the WA coastline,” says Goetze. 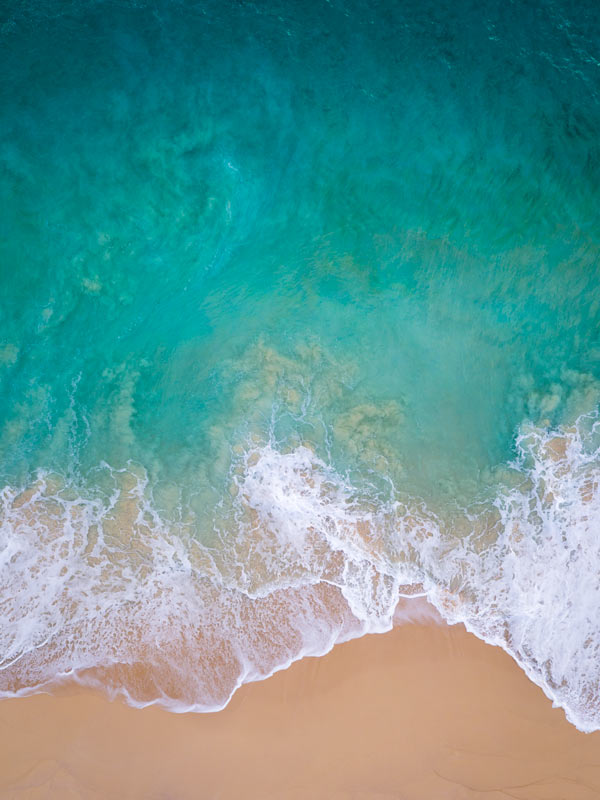 The Yallingup coast from the sky. (Image: @saltywings)

A quick scroll through the @saltywings Instagram feed will give you an indication of the compelling compositions and visual storytelling the pair specialise in. As well as sending drones into the sky, the pair occasionally hire light planes and helicopters to capture their mesmerising perspectives of the landscape. And the resultant stream of images is nothing short of hypnotic.

The other half of Salty Wings, Jampal Williamson, says drone photography has given Australians a new way of looking at WA. “It’s not just using the same vantage point from above. For example, in Broome, it’s those big blue skies against the red earth that are most striking. Our style is really like a curated love letter to the land.” 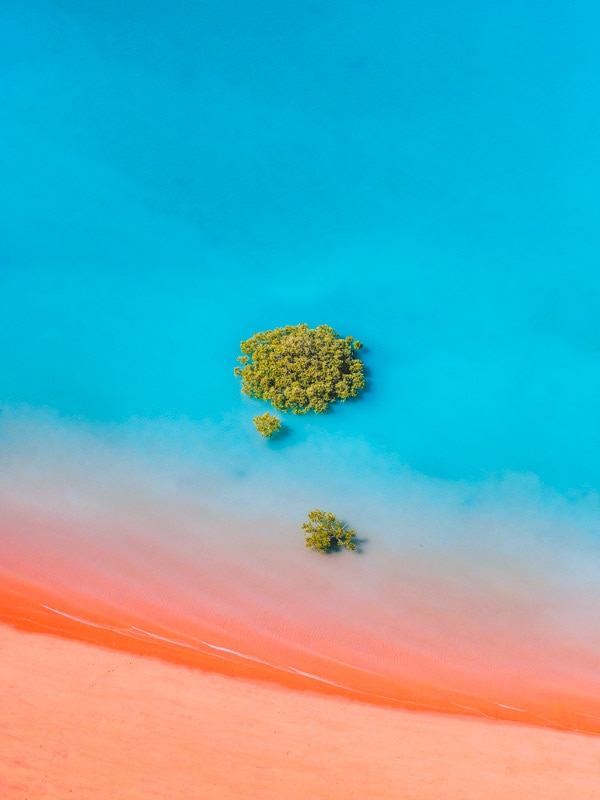 The swirling palette of reds and blues in Broome. (Image: @saltywings)

The dynamic duo met through mutual friends in 2013 when they discovered they shared a passion for photography and an ambition to become entrepreneurs. Goetze had experience building websites and Williamson was studying for a media and communications degree.

“I was halfway through my degree in 2013 when I saw a shaky old video of a drone floating through a forest. I had bought a drone and started posting photographs on my Instagram and I started selling a few prints. It was a lightbulb moment. When the choice came down to writing an essay or spending the day in nature, I chose photography,” Williamson says.

When asked what images catapulted the two into social media superstardom, Goetze points to two shots in particular: a best-selling image of Shelly Beach (SW12), near Albany, and one of James Price Point (SW0375) north of Broome. 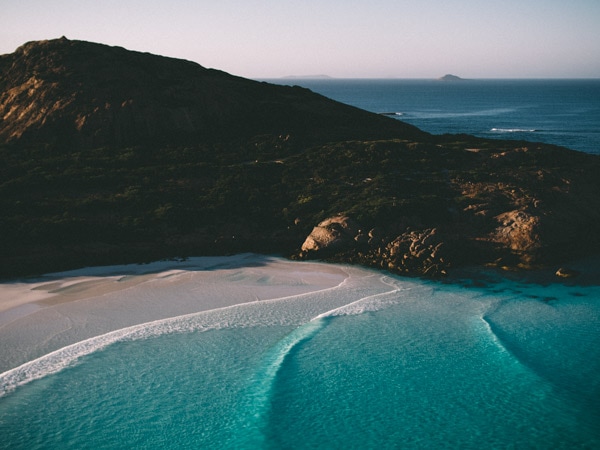 The arc of a wave in Esperance. (Image: @saltywings)

“The shot that put us in the spotlight was SW12. It blew up on social media because it looked like an abstract artwork, like it has been geometrically planned. The flow of the photo is what makes it so beautiful. The next one would be SW0375, which is the first red-earth-blue-water shot we posted,” says Goetze. 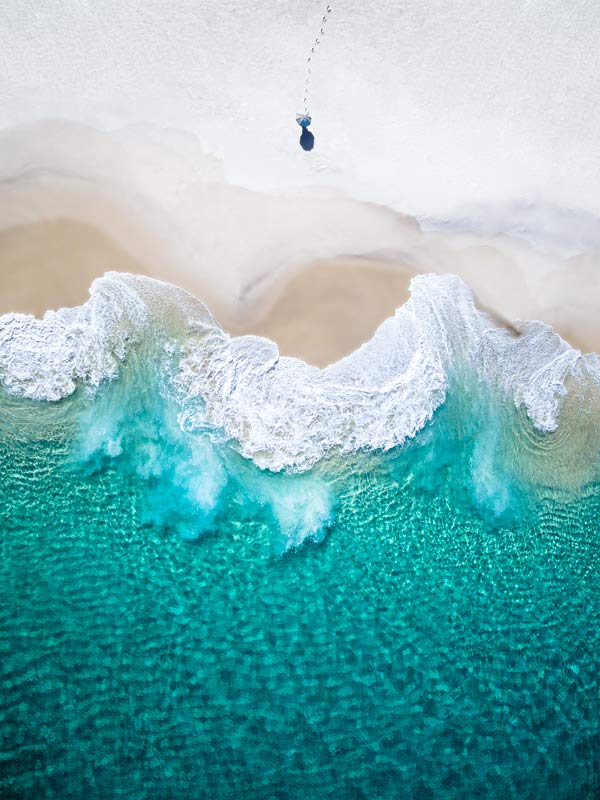 Although the aerial photographers are currently based on the East Coast of Australia in order to further build on their portfolio, they aim to continue their jigsaw-like approach to capturing WA’s sweet spots from the sky. The abstract allure of the salt lakes in the Wheatbelt will, says Williamson, be the next piece to add to the puzzle.