To help you out, we have collated a guide of the best-goings-on for the month of January, helping you plan your calendar accordingly. Thank us later.

A new pub and eatery near Newcastle is opening its doors on December 20. The menu is Mediterranean-influenced and yet focused on pizza. Cheeky Dog will locally source their pizza dough (the most important component to set an outstanding pizza part from an average one) from a gent who has spent time in Italy and London perfecting his ‘za crust.

The restaurant opens at 7 am for coffee and serves lunch and dinner as well. Of course, cocktails and drinks promise to be fabulous.

Just 50 metres from the ocean and featuring an open indoor and outdoor floor plan, Cheeky Dog is the summer hangout that we needed. Flickerfest began in 1991 as a small film festival at the local high school to Australia’s leading celebration of independent films, fielding thousands of submissions from across the globe. Held in Bondi, there’s no better way to enjoy the creativity of film’s rising talents than in the summer on Sydney’s favorite iconic beach.

Check the 2020 programme to decide which category is up your ally. Do you fancy a thought-provoking documentary or a cackle-inducing comedy? There’s a category of films for everyone. 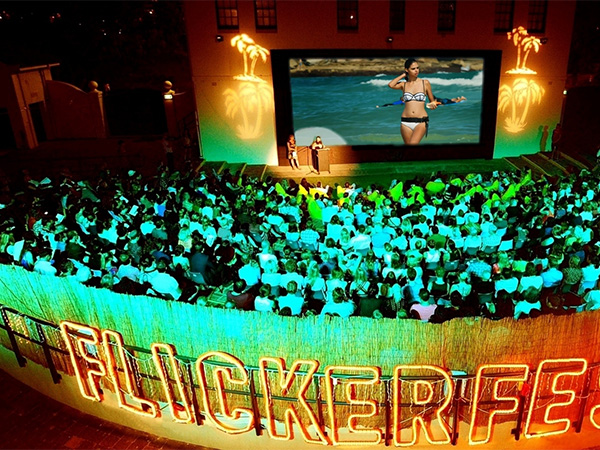 Settle in for a flick

If you were wondering how on earth you are celebrating Elvis Presley’s birthday this year, wonder no longer. The Elvis Festival in Parkes will see hundreds of slicked back do’s and leather jumpsuits roaming the 150 events planned to pay homage to the life and music of “the King.” Dress in your best-Elvis era look and gather to enjoy great music, workshops and maybe even a rock’n’roll dance lesson.

All roads lead to Tamworth in January for the annual Toyota Country Music Festival.

Known and celebrated as Australia’s largest music festival (and rated in the top 10 in the world), each year the festival brings together over 700 performers and 2,800 shows across 120 different venues.

Keep your eyes peeled for the hundreds of buskers donning Peel Street, providing a diverse range of entertainment over each of the 10 days. 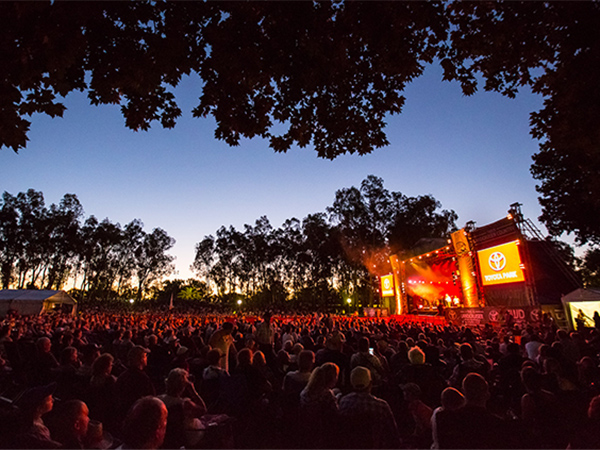 All roads lead to Tamworth in January

SO FRENCHY SO CHIC
MELBOURNE
JANUARY 12

This garden party festival celebrates all things French. The tastiest French food, the hottest French singers and, of course, wine. There will even be flower crown workshops and hammocks to bring you the perfect, Francophile festival nirvana.

Children below the age of 12 get in free and there are plenty of kids activities so this one is a crowd-pleaser for the whole family. Wine, dine and dance in the Sunshine

Say hello to the perfect compromise to the never-ending dilemma between staying in and going out.

You can now see the latest blockbusters in the comfort of bed while simultaneously enjoying the ocean breeze. For the first time ever, Mov’In Bed is creating a cinema experience with blowup mattresses on the beach. Before you tell me that this sounds too good to be true, I should also mention that there is bottomless popcorn situation involved and pizza delivery available directly to your bed. This Mov’In Bed beach experience will launch January 4 in St Kilda beach. Check out the movie lineup now because, even though there are 150 beds at each showing, we’re pretty sure these tickets are going to go quick! Get comfy at Mov’in bed Arriving at Point Nepean National Park from December 26 – January 7, bring your own picnic and sit back to enjoy sweeping views across Port Philip Bay. Soak up the rich history of the Commanding Officer’s House as the backdrop to some of 2018’s most celebrated films, plus some all-time classics.

From the 10th – 12th of January, the small town of Cygnet will again play host to the 38th annual Cygnet Folk Festival.

Serving as one of Australia’s most iconic folk music festivals, the event is very highly regarded by musicians and festival-goers alike.

Calling all gin lovers. Tasmania’s rising excellence in gin production will be celebrated properly this January (sorry, Gin-uary). There will be gins that change color with tonic, gins paired with chocolate and tastings galore of over 60 gins from 26 distillers.

The event will be held in two sessions in the Goods Shed on Macquarie Point. Tickets start at $45, which include a tote and reusable water bottle. Watch production from start to finish

It’s once again time for the Museum of Old and New Art: Festival of Music and Art, typically known as MONA FOMA, and even affectionately called MOFO on occasion. This ten-day gathering of music, arts and lights is bigger and brighter than ever, showcasing over 400 artists in 25 venues. You never know what you’ll see at MONA FOMA

More than 120,000 people descend on Exhibition Park for the four-day automotive lifestyle festival, keen to take in one of the famous events. Highlights include the world’s greatest burnout competition, the National Burnout Masters, the colourful city cruise, craziest cars in the country and so much more.

Created by renowned revhead Chic Henry in 1988, the Summernats has taken on a life of its own and become a genuine Aussie icon.

Creating a kite with your child (or friends or partner!) and flying it on the grounds of Canberra’s beautiful arboretum is nothing if not a fond summer memory in the making. This offering is available every Tuesday of January for $15 which includes all kite materials and decorations. Buy your tickets in advance!

For three weeks, free summer activities will be held along the Darwin waterfront from 10 am to 12 pm. There’s a creative line up of events, from sponge bomb wars and water slides to recycled robot building and balloon twisting. You can check the schedule to see what is happening each day. There couldn’t be a better way to get those restless kiddos out of the house during the holiday!

International Earth Chakra Day is an annual event dedicated to raising awareness about Planetary Ascension and Cosmic Consciousness around the world by using the living energy of the Earth’s chakras.

For those inclined, visiting Uluru is considered sacred, especially to meditate and make ceremony. By doing so, it can result in strengthening connections to mother Earth, activating your energy system and advancing a spiritual awakening. 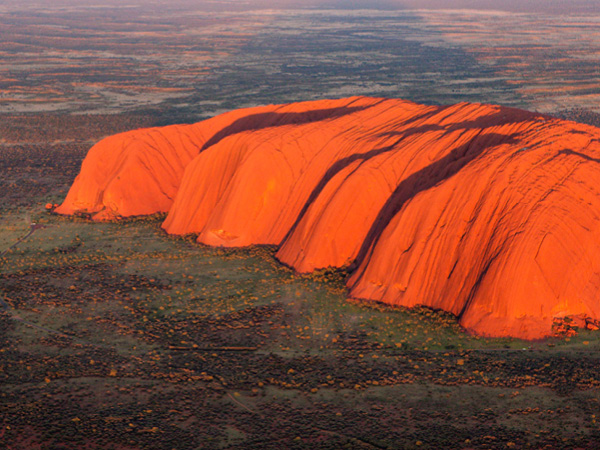 A bird’s eye view of Uluru.

The Festival of Busselton has become synonymous with summer in the South West.

The family-focussed event has proudly showcased a diverse range of events, activities, arts and crafts, sports, live entertainment to the community for over 50 years.

Festival of Busselton is proud to once again be supported by the City of Busselton – Local Government. The Festival is all about bringing great family fun and entertainment to the South-West. Plain and simple.

We think every true swimmer should check this event of their bucket list. First held in 1912, this January’s Swim Thru Perth marks the event’s 101st return to the city making it Australia’s oldest organized open water swim. The course will take you along the Swan River and through the city of Perth. There are four race distances to choose from so there’s something to suit every level of athleticism.

Even if you’re not a swimmer yourself, there’s no need to tune out. The day will incorporate plenty of festivities to keep spectators entertained, including a BBQ and sponsor stalls. Every true swimmer should check this event of their bucket list

Another year, another rosé festival! This one is South Australian through and through featuring tipples from over 25 of the state’s best small producers. Like any good festival, there will be live music and some delicious bites to accompany your drinks. Although there will be beers, ciders, gins and more available as well, rosé will be available for tasting at every wine stand. Don’t forget to vote for your favorite before you leave and help it secure the title of best South Australian rosé! Tickets are $35 and include all tastings.

Known as one of the most exciting suburbs in all of Adelaide, residents of Glenelg barely need an excuse to celebrate. However, the January 18 street party is always a fun event on the calendar.

Join the community in celebrating when Glenelg comes alive with music, dance, fashion parades and plenty of activities for both kids and adults alike. Just off the highway at Helensvale you will find Gold Coast’s creative playground, NightQuarter, which features night markets, micro-restaurants, and a unique live music space called The Paddock.

Step inside to find over 120 specialty food purveyors, designers, musicians and craftspeople and experience the local communities love for food, music and culture.

The market is open every Friday and Saturday night in January Since 2015, foodies have been delighting in the Northern Gold Coast’s NightQuarter night markets

This free festival celebrates the Sunshine Coast’s spicy, sweet ginger. It’ll be a weekend of workshops including cocktail mixing, truffle making, gardening and cooking locally– all running along the theme of ginger. An impressive lineup of culinary and horticultural experts will lead these sessions, imparting their expertise free of cost. Plus, there will be a taco truck, ice cream and a beautiful art installation made from recycled materials on site.

This women’s only tournament will soon hit the courts of the Queensland Tennis Centre this January. Expect the competition to be fierce as we’ll be seeing some of the best ladies in the game: Brisbane’s own Ash Barty and Japan’s Naomi Osaka to name a few.

Ticket prices range depending on the day and package you choose. The Sydney restaurant list that will satisfy any picky eater

As a Melbourne expat living in Sydney, I’m often faced with the dilemma of showing out-of-towners how the NSW capital can do food and culture right....